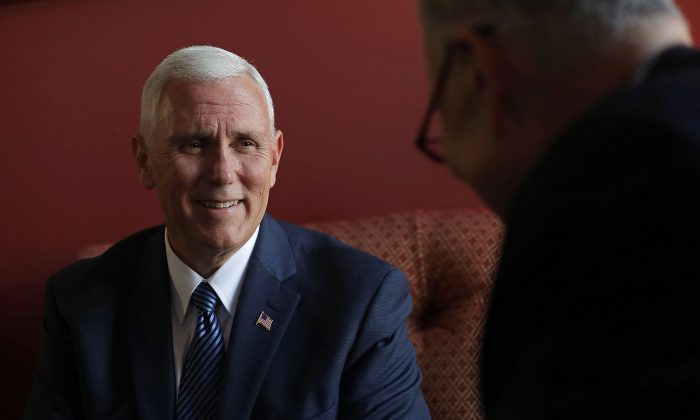 U.S. Sen. Charles Schumer (D-NY) (R) meets with Vice President-elect Mike Pence (L) on Capitol Hill Nov. 17, 2016 in Washington, DC. Pence said he was not offended when he was given an impromptu lecture by cast during a showing of Hamilton. (Alex Wong/Getty Images)
Politics

Mike Pence Says He ‘Wasn’t Offended’ by Message at ‘Hamilton’

Mike Pence, the vice president-elect, responded to the cast of the show “Hamilton” lecturing him during a Broadway performance.

Pence, the former governor of Indiana, told “Fox News Sunday” that he “wasn’t offended” by their message to him—a message that sparked a Twitter backlash from President-elect Donald Trump.

“I know this is a very disappointing time for people that did not see their candidate win in this national election. I know that this is a very anxious time for some people,” Pence said. “And I just want to reassure people that what President-elect Donald Trump said on election night he absolutely meant from the bottom of his heart—he is preparing to be the president of all of the people of the United States of America.”

Pence said he’s confident that, in time, Trump would be seen as a president for all the people, not just the people who voted for him.

Pence attended the New York City show on Friday but as he was leaving, one of the actors asked him to stick around. “Vice President-elect Pence, we welcome you and we truly thank you for joining us at ‘Hamilton: An American Musical,’ ” actor Brandon Victor Dixon said onstage.

“We are the diverse America who are alarmed and anxious that your new administration will not protect us, our planet, our children, our parents, or defend us and uphold our inalienable rights, sir. We hope this show has inspired you to uphold our American values and work on behalf of all of us.”

Trump, on Twitter, called on the cast of “Hamilton” to apologize on Saturday.

The cast and producers of Hamilton, which I hear is highly overrated, should immediately apologize to Mike Pence for their terrible behavior

On Sunday, Trump reiterated his calls for the cast to apologize.