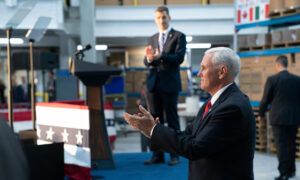 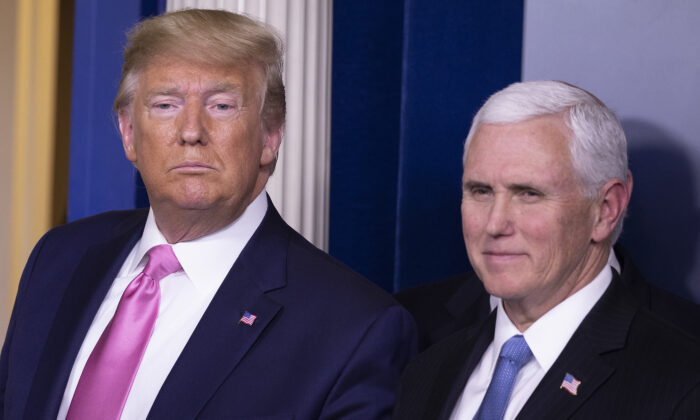 U.S. President Donald Trump looks on after a news conference with Vice President Mike Pence in the Brady Press Briefing Room at the White House in Washington on Feb. 26, 2020. (Tasos Katopodis/Getty Images)
US News

Mike Pence Says He and Trump May Never ‘See Eye to Eye’ on Jan. 6

Former Vice President Mike Pence said on June 3 he has spoken with former President Donald Trump multiple times since they left office in January but that he is uncertain whether they will ever “see eye-to-eye” regarding the events of Jan. 6.

Speaking at a Republican dinner in the early voting state of New Hampshire on Thursday, Pence offered his most extensive comments to-date on Jan. 6, calling it a “dark” and “tragic” day in history, but also accused Democrats of using the events that day to “divide the country and advance their radical agenda.”

“You know, President Trump and I have spoken many times since we left office. And I don’t know if we’ll ever see eye to eye on that day. But I will always be proud of what we accomplished for the American people over the last four years,” Pence continued.

Rioters and protesters breached the U.S. Capitol while lawmakers were counting Electoral College votes. Thousands of other protesters peacefully protested outside the building.

Five deaths were recorded in the immediate aftermath of the Jan. 6 incident. Unarmed Ashli Babbitt was shot at point blank range by a Capitol Police officer inside the Capitol building. Two others died of heart failure, and another died from an amphetamine overdose outside the building on Capitol grounds. Capitol officer Brian Sicknick died of natural causes a day later.

Pence was in the Capitol at the time of the incident. Some of the rioters could be heard chanting “Hang Mike Pence!” after the vice president said he did not have the power to challenge electoral results that gave the election victory to Democrat Joe Biden.

The events led the Democratic-controlled House to draft an article of impeachment against Trump, alleging that he incited an insurrection. He was later acquitted in the Senate.

Pence has been a loyal and vocal supporter of Trump for four years and praised him several times during his nearly 35-minute speech on Thursday.

The former vice president criticized a number of Biden’s policies, particularly on immigration and foreign relations, and accused Biden of campaigning as a moderate but becoming the most liberal president since President Franklin D. Roosevelt.

Pence also said the administration forced through Congress “a COVID bill to fund massive expansion of the welfare state” and was pushing a “so-called infrastructure bill” that was really a “thinly-disguised climate change bill” funded with cuts in the military and historic tax increases.

He also pushed back against “critical race theory,” which seeks to reframe the narrative of American history. “America is not a racist country,” he said, prompting one of several standing ovations and cheers during his speech.

It comes as Pence reportedly considers his own potential 2024 White House run and is making a number of appearances in states across the United States in an effort to boost his visibility.

Since leaving office in January, Pence has been doing work with the Heritage Foundation and Young America’s Foundation. His team said he has more trips planned, including stops in Texas, California and Michigan.

The Epoch Times has contacted a Trump spokesperson for comment.