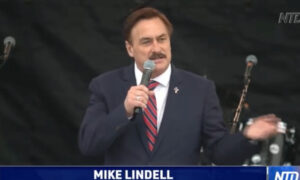 Mike Lindell: 'This Is the Start of the Greatest Revival in History'
0
Share Now
TelegramFacebookTweetEmailTellMeWeReddit
Copy Link 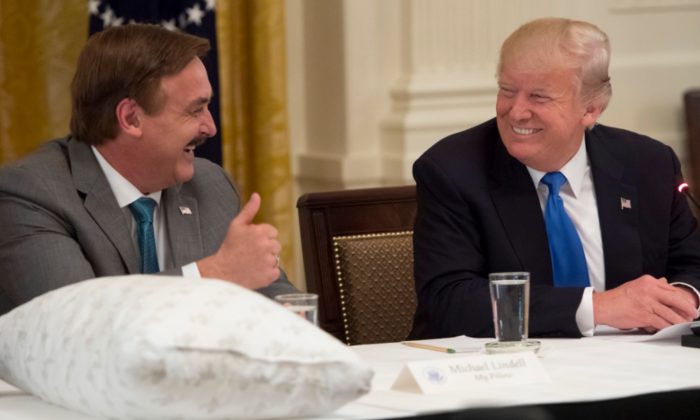 President Donald Trump shakes hands with Mike Lindell (L), founder of MyPillow, during a Made in America event with U.S. manufacturers in the East Room of the White House in Washington, on July 19, 2017. (Saul Loeb/AFP/Getty Images)
Politics

Mike Lindell, the CEO of MyPillow and a staunch ally of President Donald Trump, was seen leaving the Oval Office Friday with mysterious notes.

The notes were photographed by Washington Post photographer Jabin Botsford, but were folded in the middle and most sentences are incomplete.

However, the title of the document reads “…TAKEN IMMEDIATELY TO SAVE THE … CONSTITUTION.”

“Move Kash Patel to CIA Acting” is also visible on the notes.

“… martial law if necessary upon the first hint of any …” read the notes.

It’s hard to tell what exactly the document is about.

The White House didn’t immediately respond to a request for details about the meeting.

@MyPillowUSA CEO Michael Lindell shows off his notes before going into the West Wing at the White House on Friday, Jan 15, 2021 in Washington, DC. pic.twitter.com/AY6AyJNSyE

According to a Washington Examiner report which Lindell posted on Twitter, he said he shared with Trump and White House lawyers a document advising the president to replace Haspel. But he said he was just a “messenger” for an attorney which he didn’t name.

Trump read the document and returned it to him.

“It wasn’t an official thing. It was from a lawyer who said it was a suggestion for him [Trump],” he told The Epoch Times. “That’s what I get for trying to be a nice guy and deliver something for someone.”

He said he gets things every day from people who want to pass documents.

However, the 5-minute discussion between him and the president is not about the document, and martial law wasn’t discussed.

Pool reporters said Lindell entered the West Wing at 3:05 p.m. He declined when he was asked to come before the pool reporters to answer questions.

“I’m sure you’ll write something nice,” he told the reporters.

Joshua Philipp and Mimi Nguyen Ly contributed to this report.