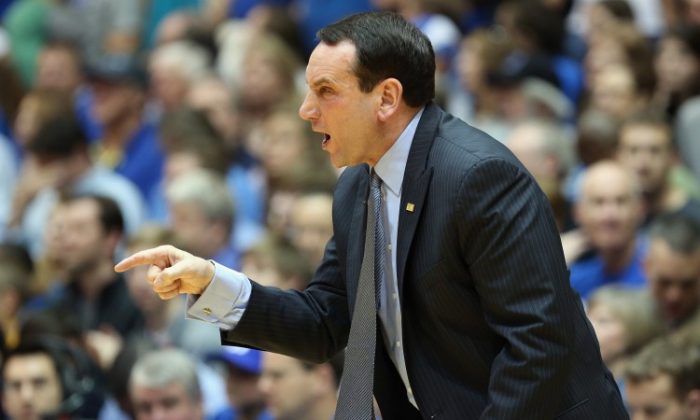 Mike Krzyzewski of the Duke Blue Devils reacts during their game against the Boston College Eagles at Cameron Indoor Stadium on Feb. 24, 2013 in Durham, North Carolina. (Streeter Lecka/Getty Images)
NBA

“And to coach the team and work with [chairman and president Jerry Colangelo] for seven years has been marvelous,” The Hall of Fame Duke coach said. “And we’re in a good spot. We need to keep building,” he continued.

It wasn’t clear who the replacement would be, but that person “will be great and he’ll get all the support of all of us and of me,” said Krzyzewski, who is commonly known as Coach K.

“They would never make announcements during the basketball season,” he added, according to Sports Illustrated, referring to a replacement. “They have respect for the coaching staff, whoever that coaching staff would be, that they would not interrupt what those guys are doing. Sometime this summer I know [USA Basketball chairman] Jerry Colangelo and USA Basketball will make an announcement.”

Krzyzewski has held the USA Basketball coaching position since 2005. He led the Americans to gold medals in 2008 and in 2012, as well as a world basketball championship in 2010.

Colangelo makes the final decision on who will be the next coach, and he has the option of staying with a college basketball coach or looking for a coach from the NBA.