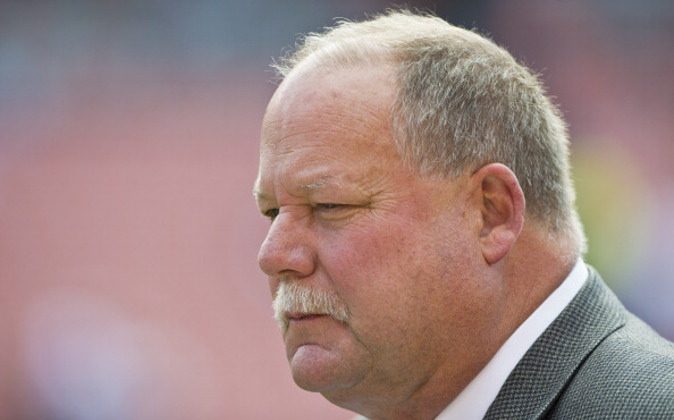 CLEVELAND, OH - OCTOBER 14: President Mike Holmgren of the Cleveland Browns on the sidelines before the game against the Cincinnati Bengals at Cleveland Browns Stadium on October 14, 2012 in Cleveland, Ohio. (Photo by Jason Miller/Getty Images)
NFL

And now, with just a week remaining in the 2015-16 NFL season, Robert Klemko of Monday Morning Quarterback reports:

Coaching carousel wild card: Per source, Mike Holmgren has, for the second time in as many years, expressed interest in the 49ers HC job.

The likelihood that this takes place is still very much in question. But we can debate the feasibility.

Mike Holmgren has had a very successful coaching career in the NFL. He started as quarterback coach of the 49ers in the late 80s before going on to become the head coach of the Packers in the 90s and then the Seahawks in the early 2000s. In his 17 seasons as head coach, Holmgren had 14 winning seasons, leading the Packers to a Super Bowl victory in 1996. Holmgren is particularly known for his acumen in developing quarterbacks, notably Steve Young with the 49ers, Brett Favre with the Packers, and then Matt Hasselback with the Seahawks.

The blemishes of hiring Holmgren as a coach today seem to be as follows. Firstly, his short-lived tenure as team president of the Cleveland Browns from 2010-2012 didn’t go well, though its worth noting that a team president and a head coach are two distinct things. Secondly, he is old, and has been removed from coaching for quite a while. As it turns out, Holmgren is 67—two years younger than Giants head coach Tom Coughlin, and four years older than Patriots head coach Bill Belichick.

Now enter the 49ers. Over the past year, the 49ers organization has been drama-filled at best, and the league’s most dysfunctional at worst. After Jim Harbaugh was pushed out the door last summer by 49ers CEO Jed York, unproven coach Jim Tomsula took the reins at head coach, leading the 49ers to an uninspiring 4-11 record. At the end of the day, considering the lack of attraction in coaching for the 49ers organization, if there’s an experienced, proven coach like Holmgren who is willing to come, the Niners have got to take it.