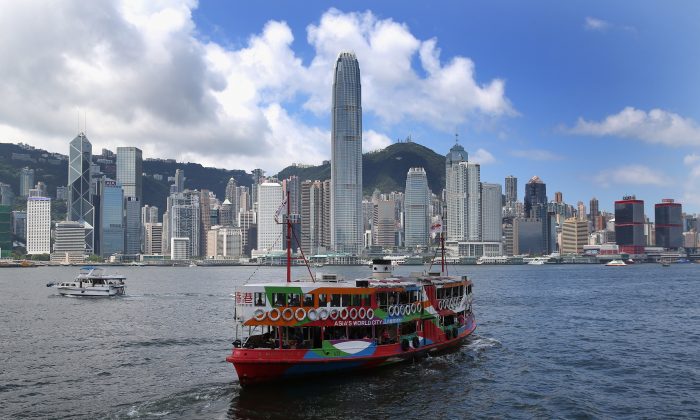 The Star Ferry crosses Hong Kong Harbor on May 31, 2013. Recent political changes are causing many Hong Kongers to emigrate from this city to other countries. (David Rogers/Getty Images)
China

HONG KONG—Thousands of Hong Kongers are now looking to make their future elsewhere, as a tide of emigration has swelled in the wake of recent political events.

According to emigration agents, factors that are motivating people to leave Hong Kong include the poor quality of air, expensive prices for apartments, the competitive environment in children’s education, and the stressfulness of life there.

However, political changes seem to be driving a recent spike in emigration.

Mary Chan, a licensed full member of the Canadian Society of Immigration Consultants, and the head of Hong Kong branch of the international migration agency Rothe International Canada, said that in the past two months, her business has soared by twofold to threefold.

On June 10, the Chinese regime issued a white paper that claimed the Chinese Communist Party has much greater authority over the political arrangements of Hong Kong than had previously been allowed by the principle of one country, two systems. That principle was supposed to be in effect for 50 years after the 1997 handover from the U.K. to China.

The Hong Kong people responded in anger and at least 500,000 joined in the annual July 1 march for democracy, in spite of intermittent, heavy downpours.

After the July 1 march, the number of emigration inquiries through the website of Chan’s agency surged dramatically from 2 or 3 a day to 10 or more inquiries a day. Because there isn’t enough staff to deal with these inquiries, the company has sent letters to customers suggesting that if they are in a hurry, they should check with other companies. At the same time, they are planning to employ more people to expand the business.

The number of applications the company received this year is double last year’s. At the beginning of 2014, the company decided to increase the service fee by 40 percent, in order to screen customers and avoid a large workload.

The experience of Ms. Dong at Jade Land Properties, a real estate company specializing in selling Canada real estate in Hong Kong, seems to parallel that of Ms. Chan. Jade Land held a real estate expo for Vancouver, Canada, in Hong Kong in late June and the response was overwhelming. The main price range for the homes featured was CA$600,000 to CA$700,000.

About 60 percent of the attendees were already very familiar with Vancouver.

“Many of them have Canadian citizenship, and know very well about home prices in different areas in Vancouver,” Dong said. “The attendees either plan to return to Canada, or migrate to Canada, and they plan to purchase a house first before the completion of the emigration process.”

“People can feel that Hong Kong has changed, it’s no longer the Hong Kong it was,” Chan said. “Think about it, (Beijing promised) not to change in 50 years. However, people more or less have noticed the change. The assimilation to China process has started, but there might be some people who can’t accept this.”

Given Chan’s experience with migrants to Canada, Hong Kong appears to be suffering a kind of “brain drain.”

After the July 1 march, Chan said the current applicants in Canada’s skilled immigration program are all from the elite class, including school principals, bankers, advertising experts, airplane technicians, and more. Most applicants are couples who both have a master’s degree.

Recently, foreigners who have lived in Hong Kong for years have also enquired about immigration to Canada for their families. According to Chan, in the past, this type of case was very rare.

Chan said that the agency has even handled a few celebrities’ emigration cases.

“They have very good income. You won’t imagine they want to leave because no one will recognize them over there, and they won’t be able to earn that kind of income. But they plan to retire anyway, even though they are not old. As the saying goes, they have made enough, that is the mentality,” Chan said.

Chan also disclosed that Hong Kong officials with high positions have also joined the emigration line, but they normally are very low-key.

These types of applicants normally won’t sort through the process by themselves.

“They all get their wives or secretaries to deliver their documents to us,” Chan said. “It’s not convenient to show their faces, and they don’t want others to see them. Besides Hong Kong officials, there are Chinese officials as well. I understand that China hasn’t been very stable recently. If their wives have a business background, their wives would be the applicants.”

There was even one customer, claiming he was the relative of a Chinese high official who had just stepped down.

“Even though some communist officials preferred to go to big countries like the U.S. or Canada and so on, if they do not fit the criteria, the agency readily suggests they go to smaller countries in the Caribbean Sea, because asset approvals are looser and it is easier to get residency in the future in those countries,” Chan said.

In the Rothe International Canada Hong Kong branch, about 30 percent of the customers are from mainland China, the rest are from Hong Kong locally.

Mr. Chen, 26, is a photographer who spoke to Epoch Times on the street in the Central business district about the ambivalence many in Hong Kong feel.

“I am still young and I haven’t thought about emigration. I will consider it when I am 30. Anyway, I grew up here, so I am emotionally attached to Hong Kong,” Chen said.

“I can feel that Hong Kong lost a great deal of freedom and is not very harmonious now. After the release of the white paper, we can feel that communist regime wants to forcibly change Hong Kong, which is really bad. If I ever want to leave Hong Kong, I will choose Taiwan or Canada.”