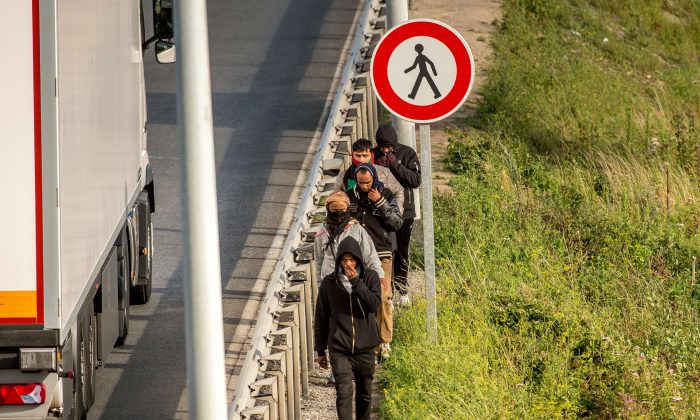 KANJIZA, Serbia—It was a journey across deserts, seas and continents, and now, a few dozen meters (yards) away, the goal was in sight: the European Union.

Adnan and his fellow Syrian migrants weren’t about to let a razor fence — under frantic construction by Hungary — get in their way.

At dusk, the column of exhausted men, women and children crept inside a corn field in northern Serbia on the border with Hungary. They were hoping to take their final few steps to what they believe to be freedom in the EU. There was a palpable sense of urgency to elude border police and make a successful frontier crossing, before the Hungarians finished the 175-kilometer (100 mile) fence by the end of the month.

Serbia’s border with EU-member Hungary has become a major crossing point for tens of thousands of migrants from the Middle East, Asia and Africa who are using the so-called Balkan route to enter the EU, while fleeing poverty or war in their home countries. Hungary, beleaguered by the influx and facing a right-wing backlash, has been rushing to build the fence both as a physical barrier and a symbol of toughness for its increasingly anti-foreigner population.

Some 1,000 migrants per day tried to cross into Hungary from Serbia before Hungary announced plans for the razor-wire fence a few months ago. That number has shot up to 1,500.

Adnan walked at the head of the column, a broad-shouldered man in a black t-shirt. He was glued to his mobile phone, tracking the GPS coordinates displaying pathways ahead. Those behind him followed almost breathlessly, trying not to catch the attention of the Hungarian guards lurking with heat-seeking devices and binoculars across a river.

“This is what we wanted and there is no way back now,” whispered Adnan, who gave only his first name fearing deportation if he made it to the West. “We are not afraid. What could be worse than the bloodshed we left behind in Syria?”

Adnan, in his mid-20s, and his group of Syrian migrants reached the border with Hungary by walking through thorny acacia trees, bushes and pumpkin fields in scorching summer heat. The group of about 50 people included a 2-month-old baby and a boy whose parents drowned when their boat capsized in the Mediterranean.

“Syria is no longer a country, it’s a bloody mess,” said Rawad Qaq, a dentist from Aleppo who was part of another group. “Where is Western solidarity now, how can they watch this tragedy unfold in front of their own eyes and do nothing for us? Just let us go and show you are human.”

But European countries both rich and poor are raising barriers, not tearing them down. With Hungary building the fence, Serbians fear that their country — itself reeling from the wars in the Balkans in the 1990s — will now become a bottleneck for the refugees. Government figures estimate that some 30,000 migrants, mostly Syrians, Iraqis and Afghans, are currently stuck in the non EU-member state.

Serbian authorities now seem to be turning a blind eye to the crossings into Hungary, with Serb policemen even showing migrants which border routes are safer to take. During a recent visit by an Associated Press crew to the border, not a single Serbian patrol was seen on the woodland frontier.

As night fell, Adnan commanded: “Yalla, let’s go!” The migrants walked a dirt track toward the Tisa river, then made a sharp turn left toward the Hungarian village of Roszke — and out of sight of an AP reporting team. Minutes later, police sirens blared and dogs barked.

That night, an SMS landed from Adnan: “They caught us in Hungary,” he said, “and they used dogs to stop us.”

Despite the setback, Adnan and the other Syrians vow to keep on trying — despite arrests and deportations — until they get into the EU.