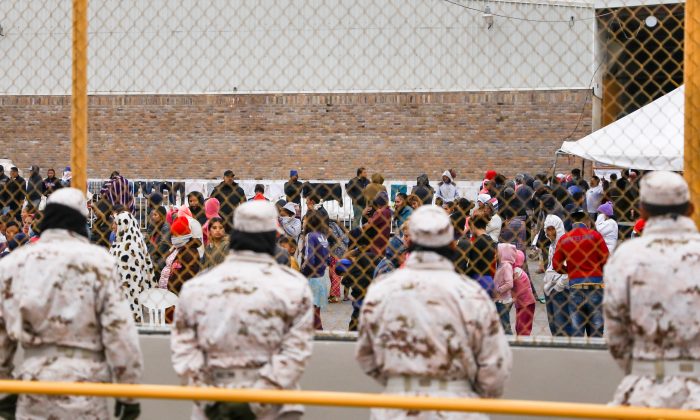 Mexican police and military personnel guard the outside of an old factory where around 1,800 Central American migrants are being held in Piedras Negras, Mexico, on Feb. 8, 2019. (Charlotte Cuthbertson/The Epoch Times)
Americas

SAN DIEGO—A group of migrants set fire to a mattress, sheets, and blankets during a riot inside an immigration facility in Tijuana, Mexico, on April 1.

Fifty-one people were evacuated and six—including two children 2 and 4 years old—had to be treated for smoke inhalation, according to reports.

Two young men from Guatemala, another two from Cuba, and one from India, allegedly burned the mattress and sheets in the bathroom, damaging the inside of the immigration facility where the migrants were being held, the director of the Tijuana Fire Department, José Luis Jiménez, told Mexican newspaper Milenio.

The National Migration Institute facility, where the riot took place, is approximately 6 miles south of the San Ysidro Port of Entry that separates San Diego from Tijuana. It is one of the busiest ports of entry along the southwest border.

Jiménez said the suspects were arrested and have been turned over to the federal police and immigration authorities and are expected to be deported to their home countries.

Though the motive is still unknown, the head of the National Migration Institute in Tijuana, Rodulfo Figueroa, believes that the migrants started the riot because they were unhappy with their accommodations in the border city.

“It was not a problem of overcrowding. It was a problem of a couple of people, who did not agree with their housing situation, wanting to create a disturbance, which resulted in this,” Figueroa said, according to Unidad Radio. “Fortunately, and thanks to the support of the firemen, the Red Cross, civil protection, the municipal police, and the federal police, this was resolved without any incident.”

In January, Honduran migrants in a Mexican immigration facility in the border city Mexicali also set fire to a couch and other furniture during an attempted riot, according to an earlier report by Milenio.

Figueroa said the migrants, who had been reported as being problematic by the authorities in the facility, had burned the furniture as part of a protest, though he did not elaborate on what they were protesting.

The 23 men, including minors, involved in the arson were immediately transferred to the National Institute of Migration offices in Tijuana, the site of the recent fire. It’s not clear whether the migrants who started the fire in the Tijuana facility are the same ones who were transferred from Mexicali.

Migrant Caravan en Route to US

Currently, a caravan of approximately 2,500 migrants, mainly from Central American countries, is traveling through Mexico on its way to the U.S-Mexico border.

The caravan left Honduras on March 23 and is expected to reach the U.S.-Mexico border within several weeks, though it’s unclear where exactly along the southwest border it will ultimately appear.

The caravan includes a large number of Cuban nationals, which is unusual as recent migrant caravans have primarily consisted of people fleeing the Northern Triangle countries and not the Caribbean.

‘Mother of All Caravans’ Forming in Honduras

On March 27, Mexico’s Interior Secretary Olga Sánchez Cordero said that a massive caravan of approximately 20,000 people was forming in Honduras.

“You can imagine the size, the scope of this migration flow and that sometimes there’s human trafficking by organized crime,” she said.

“Each migrant represents between two thousand to six thousand dollars for them,” the interior secretary said in an interview following the XXXII National Legal and Fiscal Consultation for Churches and Religious Associations conference, according to media reports.

Honduras denied the claims, saying there are no signs such a caravan is forming, Telemundo reported on March 29.