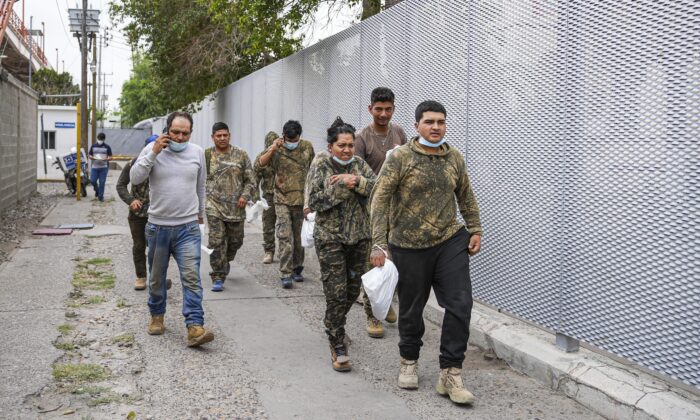 A group of Mexicans walk back into Mexico after being returned halfway along the international bridge from the United States under Title 42, in Piedras Negras, Mexico, on April 21, 2022. (Charlotte Cuthbertson/The Epoch Times)
Immigration & Border Security

PIEDRAS NEGRAS, Mexico—As the Biden administration prepares to revoke Title 42, the migrant chat rooms on WhatsApp are full of chatter about how it might affect their illegal entry into the United States.

Title 42, the public health order, allows for the quick expulsion of non-essential travelers, including illegal aliens.

“I’d like to know if after Title 42 is lifted, we still need to cross through the Rio Bravo,” a Cuban asks in the WhatsApp chat room. He uses the alternative name for the river that divides Mexico and Texas—Americans call it the Rio Grande.

“Through the river will be fine. Do it at dawn, 5 or 6 a.m., the river is lower and is less dangerous,” says a member with a Venezuelan number.

If you’re a migrant heading for the U.S. border, chances are you’re in a WhatsApp chat group. Group members on the Facebook-owned messaging app share a wealth of information about current U.S. border policies, where to cross, what time to cross, and even what to say to Border Patrol agents.

“Title 42 is suspended in some states. You can read about it,” says someone with an Ecuadorian number. “The Cubans are passing through, in my group they made it.”

Another Venezuelan advised that once Title 42 is lifted, “it will be the ICE or USA Migration that will decide if you stay or not, after an interview about the credible fear. And if they accept it, you get in, if not, they send you to Mexico to wait for your audience. That’s it.”

A chat room member with a Mexican number said: “It’s not a secret that many lie about the credible fear” to claim asylum.

“Only those whose lives are really at risk in their country of origin will pass. Those who will concoct it will have to make up the credible fear very well,” the person wrote.

More than half of illegal immigrants aren’t currently subject to Title 42 removal, as the Biden administration exempted large categories starting in February 2021. Title 42 is mostly (98 percent) being used to expel Mexicans and some Central Americans.

About 70 percent of the illegal immigrants returned under Title 42 during March were Mexican and a further 28 percent were Central American, according to Customs and Border Protection (CBP) data.

March and April both had more than 210,000 illegal immigrant encounters at the border and about 49 percent of them were expelled under Title 42.

The remainder were processed, and likely released into the interior, under Title 8 immigration law, including more than 86,000 from countries other than Mexico, Guatemala, Honduras, or El Salvador.

The Department of Homeland Security, which already dealt with a record level of illegal immigration during President Joe Biden’s first year in office, has stated that ways to remove illegal immigrants “will be limited” once Title 42 is revoked.

In Piedras Negras, the Mexican gateway city to Eagle Pass, Texas, a stream of migrants illegally cross the river daily, while others wait to learn more about Title 42 changes before trying again.

A Mexican man waits at the end of a walkway for his friends to emerge. He was processed by Border Patrol a day earlier in Uvalde, Texas, and released halfway along the international bridge in Eagle Pass.

Today, his friends will be returned the same way, under Title 42.

The man, Hector, (not his real name), said he paid a smuggler, or “coyote,” 35,000 pesos ($1,700) to get to San Antonio from San Luis, Mexico. From there, he planned to go to Atlanta and get a construction job that’s paid under the table.

The coyote had gathered 50 people for the 600-mile trip to San Antonio, netting him $87,000 whether he succeeds or not. One trip per month would allow him to collect $1 million in a year.

The group had crossed near Laredo and had been walking for about a week on ranchland, Hector said.

“We were waiting on the side of the road to get picked up and that’s when we got caught,” he said.

The coyote had coordinated drivers to pick up the group at the roadside and take them to San Antonio. The plan was to circumvent the Border Patrol highway checkpoints by foot, then travel by car to San Antonio and everyone disperses from there.

While the coyote was scooped up in the group, everyone knows not to identify him;  he’ll be processed and returned to Mexico just the same as the others who were caught.

A group of about 10 southern Mexicans in head-to-toe camouflage walked out from the international bridge walkway. Hector recognized them as part of his group from the Uvalde processing station. He said the coyote encouraged them to buy camouflage clothing before the trip.

Hector wouldn’t say whether he intended to cross again.

On the Mexican Side

Jorge Jimenez from Chiapas in southern Mexico had already been returned from the United States four times under Title 42.

Twice, he’d been caught on the train in Uvalde, where Border Patrol agents and their K-9s find hundreds of illegal aliens, often locked in grain hoppers.

The other two times, he was caught not long after crossing the Rio Grande. Each time, he was returned to Mexico the same day.

“It’s been 11 days since I last tried,” Jimenez said. “The river is too high, too dangerous. I can swim, but even then, it’s been hot and I have to walk a long way to evade Border Patrol.”

He said he’s going to keep trying. His goal is to get to San Antonio.

“My dream is to make it and bring my wife, so my son or child can be born in the USA,” Jimenez said. His wife is four months pregnant and is still in Chiapas. He said his family-run apparel business is struggling because of increased cartel activity along the Mexico–Guatemala border.

Jimenez was outside a migrant shelter in Piedras Negras that provides a meal to migrants once a day at 10 a.m. Another shelter down the road does the same.

Franklin Novio Sosa was just finishing his meal outside the shelter. He’s from Nicaragua and said he’s been in Mexico for eight months, but just arrived in the border city of Piedras Negras two nights ago.

“I will cross as soon as possible. Right now, there’s lots of security,” he said. “I’m diabetic and have heart problems, so I want to make sure rescue is there, in case I need it crossing the river.”

Over several days, however, The Epoch Times didn’t see anyone being stopped from crossing the river into the United States, and a steady stream of illegal border crossings into Eagle Pass continued.

Sosa said he has a friend in Indianapolis who has a place for him to stay and a job plowing snow.

“I left my sons behind, so I will try to bring them eventually,” he said.

He said Nicaragua has problems, but now is a good time to come to the United States, because “there’s more opportunity with this president,” referring to Biden.

Guatemalan Santos Ramirez said he plans to wait a few more days before crossing the river because he’s not sure about the laws right now. He said he wants to confirm he can get political asylum.

“Under Biden, it seems there’s more opportunities, especially with these changes coming up,” he said, referring to the end of Title 42.

He spent six months traveling and working through Mexico, first to San Luis, then Monterrey, where he eventually caught a train to Piedras Negras.

His plan is to get to Spring Valley, New York, where his wife and cousins live. Ramirez’s wife crossed illegally two years ago and has been working in a restaurant illegally since.

“She hasn’t done any legal process,” he said. Their three children, aged 15, 13, and 6, are living with his sister in Guatemala.

“Hopefully, one day I can bring them in legally,” he said.

Down on the bank of the Rio Grande in Piedras Negras, a group of Hondurans start wading across the 250 feet of river toward Eagle Pass. The group of two women, one man, and four young children had been returned via Title 42 about a week prior and were ready to try again. While the river is swift and deep and the children are scared, they make it across and are met by Texas National Guard members, who escort them to Border Patrol agents.

Another group approaches the river. A man holds an 8-week-old baby and prepares to cross with two women and three young girls. They’re all from Honduras, and it’s their first time crossing.

A Guatemalan woman wades in to go with the group, but her sandal breaks and she quickly retreats to the riverbank. She said she’ll probably try again the next day. Her son crossed two years ago, and she wants to join him in Washington.

Another Honduran family sits on the riverbank and watches. They said they’ve been in Piedras Negras for three days and they’re waiting to cross. They plan to go to Covington, Louisiana.

The number of drownings in this section of the river has increased recently, including that of a Texas National Guardsman who jumped in to save two people who were later revealed to be involved in drug smuggling.