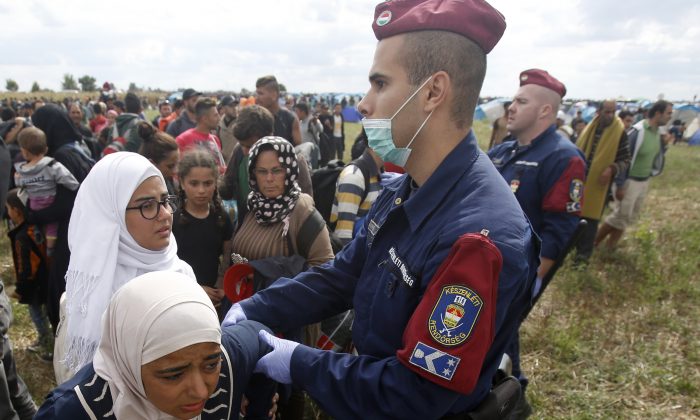 Hungarian police officers stop a group of migrants near a temporary holding center for asylum seekers in Roszke, southern Hungary, Tuesday, Sept. 8, 2015. Hungarian police stood by as thousands of migrants hopped cross-border trains Sunday into Austria, taking advantage of Hungary's surprise decision to stop screening international train travelers for travel visas, a get-tough measure that the country had launched only days before to block their path to asylum in Western Europe. (AP Photo/Darko Vojinovic)
Europe

Migrants Keep Entering Hungary as Work on Fence Speeds Up

ROSZKE, Hungary—Hungarian authorities on Tuesday began busing weary migrants and refugees to a nearby registration center, defusing some tensions at Hungary’s southern border with Serbia. But the human tide hardly ebbed, with a steady stream of people seen trying to approach Hungary, their gateway into the European Union.

Hungary has made frantic and confused efforts to control the huge number of migrants transiting the country as they try to reach Germany, leaving many trapped for days outside the border village of Roszke and furious at their treatment by Hungarian authorities. On Tuesday, Prime Minister Viktor Orban announced fresh efforts to complete a fence to keep the refugees out.

The U.N. refugee agency, meanwhile, said it is concerned about the lack of proper reception facilities in the border area and that humanitarian aid needs to be stepped up there.

Babar Baloch told The Associated Press on Tuesday that “the border police are not trained to deal with the refugees.”

“When people come in you need to receive them properly. There are woman and children and they are just kept in the open. Temperatures are going down as well so we need to have a system where these people receive proper care,” he said.

Earlier in the day, refugees anxious to pass through Hungary who were frustrated at being trapped behind a police line began pushing and police shoved back. One man was hurt in a stampede.

“We’ve been here for two days and the Hungarian government only brings one bus?” said a Syrian man, who gave only his first name, Ali.

Despite the efforts of volunteers offering water and some clothes, there were few amenities at the border. The area was strewn with garbage and more people could be seen walking along railroad tracks in Serbia on their way to Hungary. Many of the travelers had slept outdoors in a field during a cold night.

At Budapest’s Keleti train station, migrants were being allowed to board trains bound for Austria and Germany. In many cases, they were segregated from other passengers and told they could only enter certain carriages.

Almost all of those passing through Hungary are hoping to reach Germany or other Western European countries with generous welfare benefits and open asylum regulations. Almost none wish to remain in Hungary, which is seen as unwelcoming to asylum-seekers and which does not have the same economic opportunities as much richer Germany.

Around the EU, debate continued over what each country should do. Hungary and other former east bloc countries have resisted accepting refugees, but Germany has thrown its weight behind a scheme to set a quota for each of the 28 EU nations.

In Geneva, U.N. official Peter Sutherland said it’s “not enough” for countries like the United States and wealthy Persian Gulf states to give money to help Syrian refugees — they must take them in, too.

“Buying your way out of this is not satisfactory,” Sutherland said, adding that U.N. agencies are well short of their funding needs for meeting the crisis.

Some 7,000 migrants arrived in Vienna between early Monday and early Tuesday and “almost all of them continued on to Germany,” an Austrian police spokesman, Patrick Maierhofer, said.

After a stand-off with Hungarian authorities last week that saw thousands of migrants trapped at Keleti and elsewhere, the travelers were greatly relieved when Germany opened its doors to them over the weekend.

Nada Mahmod, a 30-year-old from Syria, delayed her departure from Hungary because she became separated from her 14-year-old son, Mohammad Diar. Her agony ended happily with a reunion, and they boarded a train to the West.

“We lost him in the forest. He went with another group,” she told The Associated Press in desperation before the boy was located. “Police in Hungary don’t help. Everybody else helps. Not the police.”

Poland, the largest of the eastern members, has so far agreed to accept 2,000 refugees and has been widely criticized for lacking solidarity with Germany, which has said it expects to take in 800,000 asylum-seekers this year and is able to absorb half a million per year for a few years.

Polish officials have argued that the country has too many economic problems to accept many refugees and that as a mainly Catholic country it would have trouble integrating Muslims.

After pressure to do more, Prime Minister Ewa Kopacz said Tuesday that her nation can accept more newcomers, but that it will only take people fleeing for their lives who have no hostile feelings for Poland.

She called the influx of refugees and migrants to Europe a “humanitarian catastrophe.” But she also said that European Union nations should secure their outside borders and develop a policy of returning migrants home if their countries are safe to live in.

In Hungary, Orban was quoted in Tuesday’s edition of the pro-government Magyar Idok (Hungarian Times) daily newspaper as saying that he was persuaded to deploy more workers to finish the fence along the border after an unannounced inspection of the barrier on Monday.

The 4-meter (13-feet) high fence along the 174-kilometer (109-mile) border with Serbia was supposed to be completed by Aug. 31, but is facing delays. Defense Minister Csaba Hende, who was overseeing the construction being done mostly by soldiers, resigned Monday after Orban’s visit because of the slow progress.

Several coils of razor-wire are stretched out along the whole border but it has been regularly breached by migrants, who usually crawl under it. The higher barrier is up only on some sections.

Hungarian police said Tuesday that they have detained more than 169,000 migrants this year, including 2,706 on Monday.

In that same period, the Migration Office has received nearly 158,000 asylum requests.

In Greece, the coast guard said Tuesday its patrol vessels picked up nearly 500 migrants in 11 search and rescue missions over the previous 24 hours in the eastern Aegean Sea.

The people, whose nationalities were not immediately clear, were found in small boats near the islands of Lesbos — which accounts for nearly one in two migrant arrivals in Greece — Samos, Kos and the islet of Agathonissi.

More than 15,000 refugees and migrants are stranded on Lesbos, awaiting screening before they can board a ferry to the Greek mainland — from where they head north through Macedonia, Serbia and Hungary to seek asylum in more prosperous European countries.