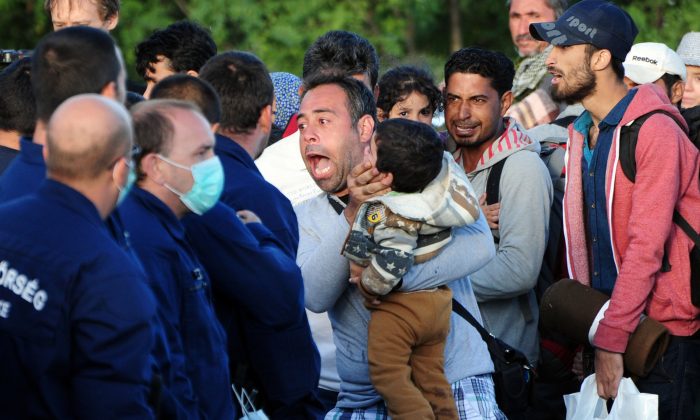 Migrants are stopped by police after the group broke out from a collection point near Roszke village at the Hungarian-Serbian border on September 7, 2015. (CSABA SEGESVARI/AFP/Getty Images)
Europe

ROSZKE, Hungary— Several hundred Arabs, Asians and Africans tired of waiting for buses broke through Hungarian police lines near the Serbian border Monday and marched north on the main highway to Budapest as authorities once again demonstrated an inability to control the human tide passing through Hungary.

Police repeatedly tried to form lines blocking roadways around a migrant holding center near the border village of Roszke, but the asylum seekers vastly outnumbered police and were easily able to outflank the lines of officers, jogging through farm fields to reach the M5 motorway linking Hungary to Serbia.

Traffic was halted in both directions as backpack-clad asylum seekers walked briskly on the edge of the highway, groups of police walking alongside them but not trying to stop them. A lone police helicopter monitored their progress at sunset.

As the lead marchers passed media filming their progress from a highway overpass, dozens raised their arms in celebration and chanted “Germany! Germany!”

The move mirrored last week’s surge of migrants west from the capital, Budapest, toward Austria in mass protests that forced Hungarian authorities to relent on security grounds and move thousands in a fleet of buses to the Austrian border. Hungary also has stopped checking foreigners for travel visas at train stations, making it easier for the newcomers to leave Hungary for the wealthier West, particularly Germany.

Monday’s renewed trouble underscored the growing sense across the continent that the 28-nation European Union must reach a continent-wide agreement on sharing responsibility for sheltering more of the estimated 340,000 asylum seekers who have arrived in the 28-nation bloc already this year.

German Chancellor Angela Merkel, reflecting on “a moving, in some parts breathtaking weekend behind us,” said all EU countries should help to accommodate those trying find a refuge from war in Europe.

Further south on the migrants’ epic, meandering path to Germany, the situation remained fraught with fear and anger.

French President Francois Hollande announced his country would welcome 24,000 refugees, while he and Merkel had agreed on a formula for spreading the migrant load across Europe.

But Hungary’s prime minister, Viktor Orban, said he wasn’t prepared to pitch in and questioned how any EU quota system based on current figures could resolve the real issue of unrelenting immigration.

Even as calm returned Monday to the main Austria-Hungary border crossing where more than 15,000 people crossed over the weekend en route to Germany, Hungary’s leader hit back at European partners who blamed his country for stoking the chaos.

Merkel told reporters in Berlin that Germany would ensure that those who need protection receive it, but those who stand no chance of getting asylum would be swiftly returned to their homelands. Germany is preparing to receive by far the largest number of immigrants, an estimated 800,000 by the end of the year, and Merkel said other EU nations should take some.

Outside the EU, British Prime Minister David Cameron said the U.K. will resettle up to 20,000 Syrians from camps in Turkey, Jordan and Syria over the next five years. Announcing the vast expansion of Britain’s refugee program, he told Parliament that Britain has a moral responsibility to act. Cameron said vulnerable children and orphans would be given priority.

Orban mocked the European Union’s efforts to distribute migrants through a quota system and compared Hungary to a “black sheep” representing a voice of reason in the EU flock.

He said Europe first must focus on security measures designed to force travelers from troubled lands to seek asylum in neighboring countries, not travel thousands of miles (kilometers) into the heart of Europe. He said the current discussions on a new quota to handle 120,000 migrants soon would lead to discussions on hosting millions more.

“We represent the position of what the Americans call ‘first things first,'” Orban told Hungarian ambassadors meeting in Budapest. “As long as we are unable to defend Europe’s external borders, it makes no sense to talk about the fate of the immigrants.”

In a related development, Hungarian Defense Minister Csaba Hende resigned Monday. The statement from Orban’s government didn’t explicitly blame him for Hungary’s failure to complete the building of a fence along Hungary’s 175-kilometer (110-mile) border with Serbia, but it was supposed to be completed last month and remains largely unfinished.

Austrian Chancellor Werner Faymann and other EU leaders have blamed Orban for bungling Hungary’s intake of migrants so badly that it left Austria and Germany no choice but to open their borders Saturday to thousands who had complained of neglect and human rights violations in Hungary and refused to stay in refugee camps there.

Hans Peter Doskozil, police chief of Burgenland in eastern Austria, said more than 15,000 people crossed from Hungary by foot, bus, train and car over the weekend. Austria ordinarily would require all asylum seekers to register there, but in an exceptional gesture permitted all to travel onward chiefly by train to Germany, their overwhelming destination of choice.

But further south on the migrants’ epic, meandering path to Germany, the situation remained fraught with fear and anger.

Police near Hungary’s southern border with non-EU member Serbia tried to block hundreds of new arrivals from walking out of a field that serves as the first holding center for migrants walking across the border through a police-supervised hole in its border razor-wire defenses.

Migrants in the Balkans: Everyone Wants to Be Syrian

Tempers flared as the people, chiefly identifying themselves as Syrian, demanded to be allowed to walk away rather than wait hours for infrequent bus service that would take them to a nearby Hungarian registration camp. Police, some donning surgical masks and gloves in fear that the foreigners might have infectious diseases, pushed them back to the side of the road and insisted they must wait for buses.

But the migrant numbers soon overwhelmed police, who could not stop the foreigners from reaching the M5 motorway linking the Serbian capital, Belgrade, to Budapest some 175 kilometers (110 miles) to the north.

Soon, as happened Friday when thousands walked west from Budapest on the M1 motorway, hundreds were walking along the side of the two-lane road while police were reduced to blocking traffic and walking alongside the migrants.

Near the village of Idomeni on Greece’s northern border with Macedonia, scuffles broke out early Monday between police and people waiting to cross, as the crowd grew to nearly 2,000. Tensions eased after authorities, who had been allowing only small groups to cross every half hour, began moving people more quickly. Eventually the crowd thinned, with an estimated 1,000 crossing by midday.

Greece’s migration minister, Yiannis Mouzalas, estimated that at least two thirds of the more than 15,000 travelers stranded on the eastern Aegean island of Lesbos would be ferried to mainland Greece in the next five days. Lesbos bears the brunt of the refugee influx from nearby Turkey, with more than 1,000 arriving daily on small boats in often dangerous conditions.

In a late-night meeting that lasted until early Monday in Berlin, the German government agreed to spend 6 billion euros ($6.6 billion) next year to support asylum seekers. It also decided to make it easier to deport those from countries considered stable nations such as Montenegro, Kosovo and Albania.

The government’s reformed aid package will include less cash in hand for asylum seekers but better non-cash benefits, including improved housing and language classes.

“I say this quite openly, there will be conflicts,” the economy minister told reporters. “The more openly we talk about the fact that people are worried, that there’s fear in the country and that there may be conflicts, will I think help us deal with this realistically and confront reality.”

German media reported that five asylum seekers were injured in a fire Monday in Rottenburg in southwest Germany. Three were injured when they jumped from the burning house, while two others were treated for smoke inhalation.

German officials specified no cause of the fire, though right-wing militants in Germany have set fire to other properties earmarked for asylum seekers in recent weeks.