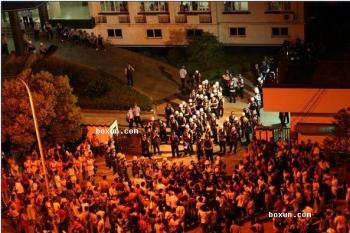 An internet photo of the riot. (Boxun)
China

According to an Internet source, three people had been beaten to death by police, one from Jiangxi Province and two from Sichuan Province. Officials denied this while blocking information relevant to the incident.

According to Yuhuan County authorities, the riot broke out in Kanmen Town, Yuhuan, on the night of July 10, after a worker surnamed Zhang came to a local management office with a group of other workers to complain about injuries from “bumping his head against a wall”  the previous day, while trying to get a temporary residence permit.

The Kanmen police station quickly dispatched additional police officers but they encountered an even larger number of protestors. The crowd surrounded the police and yanked the fuel pipes from six police motorcycles. Faced with a tense situation, the police decided to withdraw. But while they were doing so, the surrounding crowd threw rocks at them, injuring three officers. The police arrested 24 people.

Chen, who works in a company located near the police station said, “On the night of July 9, while the police were examining his temporary residency permit, Zhang had a conflict with the police. This was the cause of the incident.”

Chen added, “Later, about 4,000 people including local residents and migrant workers gathered to join the protest. The people inside the management office could not get out, they called police and then local police came.”

“The police prevented people from entering the area,” said Chen. “The protestors threw rocks and beer bottles at the police.”

On the night of July 11, more than 2,000 people again surrounded the police station, calling for the release of those who had been arrested.

On July 12, more and more people gathered around the police station.

“The police blocked the police station preventing people from entering,” said Chen. “Because they were unable to enter the police station, they threw rocks from a distance.”  “Many windows were smashed,” continued Chen. “There were angry crowds demanding the release of the 24 arrested.”

When an Epoch Times reporter called the police station, the officer on duty said that no one had been killed.

Reporter: Were the windows of the police station smashed?

Reporter: A website said several people were beaten to death. Was anyone injured?

Officer: This information is not true. No one was injured.

Reporter: Then could you tell me what was the cause of this incident?

Officer: Regarding this, you need to call our supervisors.

The Chinese communist regime imposed residency rules after coming to power in 1949 as part of tight controls on where people could live, work and even whom they could marry. The residence registration system requires migrant workers who have left poor rural areas to look for work in cities, to carry their temporary residence permits, exposing them to police abuse and extortion.

In 2003, a college graduate, Sun Zhigang was brutally beaten to death at Guangzhou’s detention center for not carrying his temporary residence permit. Prior to that, 25 migrant people were allegedly burnt to death in a locked police vehicle by Guangdong Civil Affairs Bureau personnel for the same reason.

To read the original article in Chinese, please click here