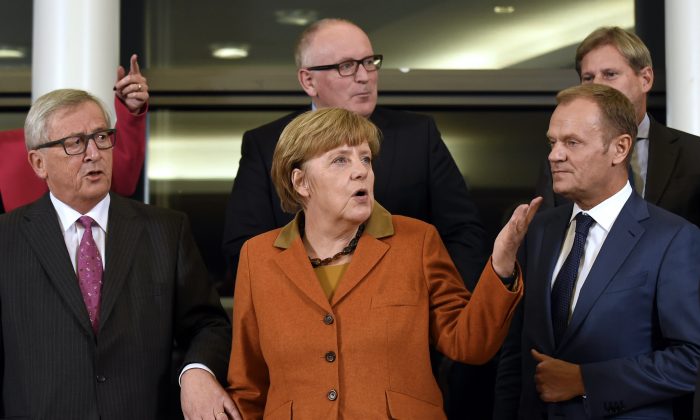 EU Leaders Criticize Each Other at Summit on Refugees

BRUSSELS—European leaders lashed out Sunday at each other’s handling of the continent’s greatest immigration crisis since World War II, even as they came together to seek ways to ease the plight of the tens of thousands marching across the Balkans toward the European Union’s heartland.

At a hastily called emergency summit in Brussels, 11 EU and Balkan leaders were especially looking to shore up Greece’s porous border with Turkey and slow the flow of people heading north toward the European Union’s heartland.

Nearly 250,000 migrants have passed through the Balkans since mid-September and the surge is not being deterred by either cold weather or colder waters off Greece. Croatia said 11,500 people crossed into the country Saturday, the highest in a single day since Hungary put up a fence and refugees started coming into Croatia in mid-September.

Slovenian Prime Minister Miro Cerar said his tiny Alpine nation was being overwhelmed by the refugees—with 60,000 arriving in the last 10 days—and was not receiving enough help from its EU partners.

Slovenian Prime Minister Miro Cerar said his tiny Alpine nation was being overwhelmed by the refugees—with 60,000 arriving in the last 10 days—and was not receiving enough help from its EU partners.

He put the challenge in simple terms: if no fresh approach is forthcoming “in the next few days and weeks, I do believe that the European Union and Europe as a whole will start to fall apart.”

Serbian Prime Minister Aleksandar Vucic asked a fundamental question that the 28-nation bloc and non-EU nations like Serbia have been unable to answer since the migratory trek across the Mediterranean and through Turkey started last spring, “What we are going to do with hundreds of thousands of these people?”

Half a year later, there is no answer. Sunday’s meeting was hoping to come up with some Band-Aid solutions at best. Greek Prime Minister Alexis Tsipras commented that having a summit on the migrant crisis was of little use if Turkey was not invited.

Many said the EU needs to get control of the refugee flow at the bloc’s external border between EU-member Greece and Turkey. Migration experts, however, said the flood of refugees won’t be halted until the world resolves the war in Syria, which is driving millions out of the country.

Vucic said he was prepared for “hard, not very pleasant” talks. He said Serbia would not “put up any walls” like Hungary’s new razor wire-topped border fences.

Greece, criticized for being ill-prepared as a first EU buffer against the migrants, decried the lack of EU solidarity.

“Till today, it was difficult to find a solution, because a series of countries adopt a stance ‘Not in my backyard,'” Tsipras said.

Hungarian Prime Minister Viktor Orban, so often the target for building border fences that diverted the flow of refugees to other nations, simply said, “Hungary is not on the route anymore, so we are just observers here.” Then he lashed into measures other EU nations had already taken, especially those belonging to the Schengen passport-free border zone.

“The No. 1 source of the crisis is that members of the European Union, and especially those who are members of Schengen treaty, are not able, or are not ready to keep their word,” Orban declared.

As the leaders bickered, those out in the field begged them to act quickly and more decisively.

At Slovenia’s overwhelmed Brezice refugee camp near the border with Croatia, a spokesman for the U.N. refugee agency urged leaders to come up with a system to register and screen newcomers when they first enter Europe, rather than in piecemeal attempts at borders along the way.

“But also very important is to help Syria’s neighboring countries, where there are around 4 million refugees,” said UNHCR spokesman Babar Baloch. “These people don’t need to take these risky journeys if there are legal pathways to come to Europe.”

Migrants now mainly travel across the water from Turkey to Greece, and then north to Macedonia and Serbia before entering Croatia and moving on to Slovenia and Austria. Most are aiming to get to Germany or Scandinavia.