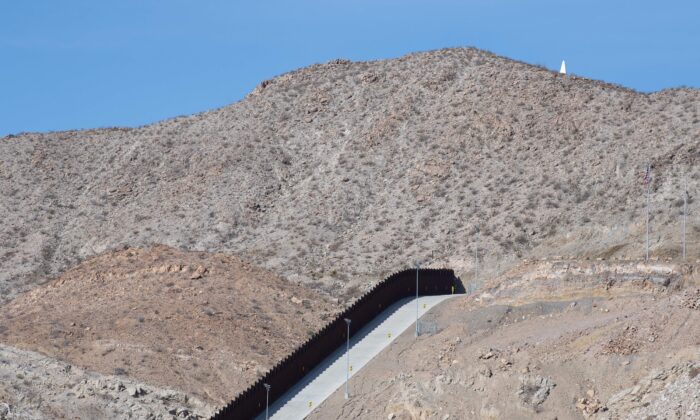 The border between the United States and Mexico is seen near El Paso, Texas on March 15, 2021. (Justin Hamel/AFP via Getty Images)
Human Trafficking

Many migrant children will end up in sex trafficking in the midst of a surge in illegal immigration along the U.S.-Mexico border, said Texas Lt. Governor Dan Patrick.

“They are sending children into this country having no idea where they are going to end up,” Patrick told Fox News, referring to the burgeoning number of migrant children arriving at the border without any parental supervision. “And some of these children are going to end up in sex trafficking. When they take these kids and send them to Uncle Bob in New Jersey, wherever it may be.”

In facilities to house these children along the border, there is not enough staff to handle the numbers, he asserted.

“They don’t have the staff to watch them, to track them. They don’t know where they’re going,” Patrick, a Republican, added in his interview on Tuesday.

The Federal Emergency Management Agency (FEMA) was dispatched by the Biden administration to the Southern Border over the past weekend to help care for unaccompanied minors who crossed into the United States in recent weeks. Since the start of President Joe Biden’s administration, thousands of migrants have arrived at the border, trigger what some have described as a crisis.

Patrick claimed that the White House’s immigration policy is prompting a surge of children from Mexico and Central America, who will end up in “sex trafficking operations in this country,” referring to reports of human smugglers subjecting children and women migrants to sexual abuse. He added: “This is putting not only Americans at risk but these children at risk.”

The number of migrants who are illegally entering the country is the highest it’s been in 20 years, said the Department of Homeland Security (DHS) on Tuesday.

“We are on pace to encounter more individuals on the southwest border than we have in the last 20 years,” DHS Secretary Alejandro Mayorkas said in a statement. “There is understandably a great deal of attention currently focused on the southwest border,” Mayorkas added. “The situation at the southwest border is difficult. We are working around the clock to manage it and we will continue to do so. That is our job. We are making progress and we are executing on our plan.”

Republicans have said that Biden’s executive actions that did away with the previous administration’s immigration rules—including the “Remain in Mexico” policy, construction of the border wall, and other provisions—led to the spike. Democrats, meanwhile, blamed former President Donald Trump’s administration for what they have described as a broken immigration system.

The Epoch Times has reached out to the Department of Homeland Security for comment.