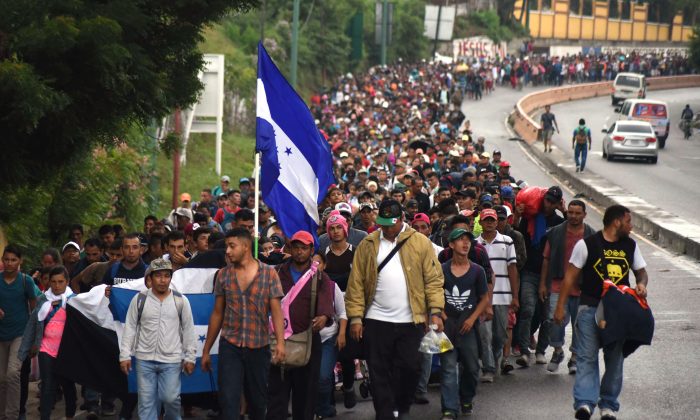 Hondurans and others in a migrant caravan move toward the United States in Chiquimula, Guatemala on Oct. 17, 2018. (ORLANDO ESTRADA/AFP/Getty Images)
Viewpoints

Organizers have no interest in being American, seek to undermine rule of law

Honduran migrants may say, “We are fleeing criminality and violence.” Yet, the migrant caravan has proceeded to smash down a border gate, push aside police, and storm a bridge.

The caravan participants say, “We are proud Hondurans,” while waving flags, then walk out and declare the nation is so unbearable that the people must flee permanently.

They say, “We want to work hard and engage in free enterprise,” but then are members of the socialist party of Honduras, led by Manuel Zelaya, an old buddy of Hugo Chávez and his anti-American group, the Bolivarian Alliance.

The explanation for the mixed messages is simple: The coordinated migration from Honduras, known as “the caravan,” doesn’t have noble intentions. While many of the thousands of participants are hapless pawns, the organizers are engaged in a political stunt, at the height of hypocrisy.

The socialist and criminal elements of the caravan were evident from the beginning. The chief instigator is Bartolo Fuentes, a former congressman for the Liberty and Refoundation Party (Libre). These ardent socialists claim “revolution is inevitable,” on the path to “economic and social equality.”

The Libre candidate in the 2017 presidential election was Salvador Nasralla. Not only is Nasralla a big fan of the migrant caravan, but he also has a soft spot for the dictatorship in Venezuela and fans in the FARC terrorists of Colombia. During his campaign, he claimed mass protests in Venezuela were a “media invention,” while more than 100 Venezuelan agents were in Honduras to get him elected.

Honduran Minister of International Affairs María Dolores Agüero adds that the caravan’s organizers are working in tandem with organized crime. The organizers deceived participants, she claims, by promising secure, visa-free travel, and documentation for asylum in the United States—all too good to be true, but plenty of unwitting people bought the lie. Two have already died along the way.

We shouldn’t be surprised that the participants didn’t have the patience to go through the legal asylum process offered by the Mexican government. Such were their numbers that the only way to stop them would have been for Mexican law enforcement to open fire, a drastic measure they weren’t willing to take.

Fuentes told La Tribuna, a Honduran newspaper, that it all began with a WhatsApp group of 160 members. As if by magic, 1,200 people began the march in Honduras, and many more joined before the group even crossed over into Guatemala.

Just who is funding this operation remains unclear. The well-known NGO Pueblo Sin Fronteras, which promotes open immigration from Latin America to the United States, has expressed support but rejects the notion of its involvement. In fact, the group recommends against such group migrations at this time.

A plausible explanation is that Libre wants to score political points, garner patronage via remittances (a fifth of Honduran GDP), and perhaps curry favor with the U.S. Democratic Party. Honduran President Orlando Hernández and his National Party claim this is a violent political trick from Libre and that it will damage the nation’s reputation.

Honduran political analyst Jorge Yllescas can see why people want to migrate: Poverty, unemployment, and organized crime are all at extreme levels, even by Latin America’s standards. A third of Honduran households, for example, survive on less than $240 per month, and that percentage rises to more than a half in rural areas.

None of this is new, and Yllescas’s fear is that the plight of the poor has been politicized by Libre. He doubts their sincerity, given their lack of interest in the enormous exodus from Venezuela, which happens to be on account of their ally.

The U.S. Embassy in Honduras has warned that the migrants won’t be granted entry into the United States and that the participants are taking a risk with human traffickers. That comes as no surprise and is likely the confrontation that the Libre organizers wanted all along. The problems for those who don’t get through will feed Libre’s desire for self-promotion to portray themselves as the defenders of Honduras’s downtrodden.

Hernández has his own problems and is only in office because of a peculiar court decision to dismiss his term limit. However, since he isn’t an ardent opponent of President Donald Trump and the United States, Libre seeks to make him out to be an apologist for alleged U.S. imperialism. The caravan standoff seeks to divide those involved and their sympathizers from Hernández and Trump, to the good of nobody but Libre.

How Honduras Can Rise

Neither abandoning Honduras nor blaming the United States—as is Libre’s intent—do anything to resolve underlying problems for the Catrachos. On the contrary, Hondurans and their government should do all they can to foster the rule of law and a healthy trade relationship with the United States. Beyond immediate profits on both sides, closer ties and legal predictability would foster crucial foreign investment and education where it’s so badly needed.

Rampaging into the United States is hardly a prudent way to achieve that. Although some may slip through illegally and help themselves, they will do more harm than good for their countrymen at home.

For Hondurans who would point the finger at the big-bad United States, this may be the time to face self-made problems at home. Americans didn’t make Honduras corrupt; they didn’t pollute the Caribbean coast; nor do they sustain the maras (gangs) that plague Central America. The majority of gang activity isn’t related to the drug war and depends on the extortion of businesses and informal activity such as prostitution and human trafficking.

An article by a former colleague reveals what happens when the tables are turned. Elena Toledo—director of the Eléutera classical-liberal think tank in San Pedro Sula—advocated opening Honduran borders to Venezuelans. Her article generated complaints about there not being enough jobs and social services for Hondurans, let alone for foreigners. Does that sound familiar?

A more prosperous Honduras would be a win-win for locals and the United States, the antidote to Libre’s rhetoric and the long-term exodus. That will only happen by facing the problems at home and adopting a transparent, open economy that rewards honest entrepreneurship and investment for a foundation that will last.