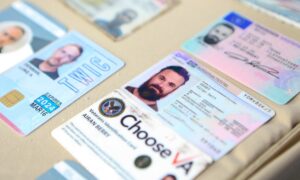 Two groups of migrants from the migrant caravan marched to the U.S. Consulate in Tijuana and demanded that President Donald Trump let them in the country or pay them $50,000 to go home.

The attempted ultimatum came on Dec. 11, just over two weeks after a mob of hundreds of migrants tried to overwhelm American border agents but were turned back by tear gas.

In recent weeks thousands of caravan migrants poured into Tijuana, just south of the United States, but have been frustrated by Trump’s border security, which has made crossings impossible for large groups.

While small groups and individuals have been slipping through, a number of migrant caravan members have opted to head home, accepting an offer by the Mexican government for transport back to their countries of origin.

Around 6,400 migrants were staying at the Benito Juarez sports complex next to the U.S. border in Tijuana until Nov. 30, when authorities started moving them to a new location because a downpour created unsanitary conditions. Since then, groups of migrants have chosen different paths.

As of Tuesday some 700 migrants have voluntarily returned to their home countries and another 300 have been deported, caravan member Xochtil Castillo told the San Diego Union-Tribune after meeting with Mexican officials. Another 2,500 have applied for visas in Mexico, after many migrants initially rejected Mexico’s offer for temporary asylum.

The rest of the migrants are presumed to have moved to other Mexican border cities, crossed into the United States, or returned home.

“A lot of people are leaving because there is no solution here,” said Douglas Matute, 38, of Tijuana. “We thought they would let us in. But Trump sent the military instead of social workers.”

The demand for money from the U.S. government or entry into the country came from a group of about 100 migrants. Organizer Alfonso Guerrero Ulloa of Honduras claimed that $50,000 was not a large number.

“It may seem like a lot of money to you,” Ulloa told the Union-Tribune. “But it is a small sum compared to everything the United States has stolen from Honduras.”

The group said that the U.S. Consulate had 72 hours to respond but hadn’t come up with a plan to respond if their demands were not met.

Another group of about 50 arrived at the consulate later in the day and requested the United States speed up the asylum process. Immigration officials are processing between 40 and 100 asylum seekers a day through the San Ysidro Port of Entry amid a backlog in asylum courts in the United States.

The open borders group Pueblo Sin Fronteras, whose members have helped organize and lead the caravan, helped organize the delivery of the second letter. The letter asked the United States to process 300 asylum seekers a day, reported UniRadio.

While 89 percent of aliens from Central America pass the initial credible fear of return to their home country interview at the border, only 9 percent of Central Americans are granted asylum, according to the U.S. Department of Justice. The conditions for asylum are more narrow than many people know.

The two groups said that their letters were well-received.

The delivery of the letters came on the same day that President Donald Trump met with Democrat leaders and threatened to shut down the government if he didn’t receive approval for funding for the border wall.

“I am proud to shut down the government for border security, Chuck, because the people of this country don’t want criminals and people that have lots of problems and drugs pouring into our country,” Trump told Senate Minority Leader Chuck Schumer (D-N.Y.).

The president cited several statistics on border crossings in areas were barriers are deployed, all showing an above 90 percent decrease in illegal crossings. Schumer argued that border security can be accomplished out without a border wall.

Trump wants $5 billion in funding; the wall, which includes new sections that would link to old sections, is estimated to cost $25 billion in total.