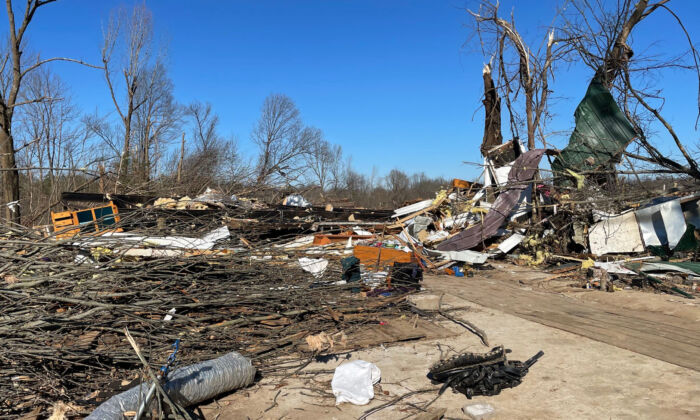 Members of Ohio Task Force 1 are continuing to help search for victims of the tornadoes that swept through Kentucky on Dec. 11 and Dec. 12, 2021. Most of the southwestern portion of the state was heavily damaged, leaving hundreds of people without homes or businesses to return to, especially in Mayfield. As of Tuesday, there have been at least 74 deaths confirmed. (Ohio Task Force 1).
US News

Specially trained task forces from across the U.S. Midwest are assisting with rescue and recovery efforts in Kentucky, which was hit by a series of deadly tornadoes that tore through six states over the weekend.

Among them are more than 40 members of Ohio Task Force 1, who received word on Dec. 12 to report to Kentucky for up to 16 days, an assignment that could keep them from their families during the Christmas holidays.

At least 74 deaths from four tornadoes have been confirmed, and more than 100 people are unaccounted for, with both numbers expected to grow, Kentucky Gov. Andy Beshear, a Democrat, said on Dec. 13.

The tornadoes on Dec. 10 and Dec. 11 hit near Mayfield, Kentucky, and were among the deadliest in the Bluegrass State’s history, according to reports.

Other task forces under the Federal Emergency Management Agency (FEMA) were activated to help in the search and recovery efforts, including 90 members from Indiana, 45 from Missouri, and 45 from Tennessee, Phil Sinewe, spokesman for Ohio Task Force 1, told The Epoch Times.

The Ohio team of medical, search and rescue, and logistics staff arrived in Kentucky about 6 a.m. on Dec. 13. Within two hours, it had started work in Graves County in southwestern Kentucky, Sinewe said.

The task force was being led by Jim O’Connell of the Columbus Fire Department, Sinewe said.

“They are conducting wide-area searches. They are searching a plat—or grid of properties—looking for victims.

“The task force also is mapping out damage of properties,” Sinewe added. “They also are there to provide support to people not knowing what to do, or who to talk to. This is devastating, and the people of Kentucky need help.”

Early efforts had focused on the collapse of the Mayfield Consumer Products building, which housed a candle factory where 110 workers were reportedly working when the tornado hit. While dozens were feared buried beneath the rubble, the company said eight people were killed, while the remaining 102 workers who were on duty are alive and have been accounted for.

Chris Heaton, from Vandalia, north of Dayton, Ohio, was enjoying Winterfest at the Kings Island Amusement Park with his wife Mandy and 4-year-old twins, Elias and Kennedy, on Dec. 12 when he was told the team had three hours to report to Dayton International Airport.

“We were an hour-plus from home, so everything was a blur for those few hours,” Mandy Heaton said. “Grabbed bags. Very quick ‘see ya laters,’ and off he went.

“I’m very humbled. Those few hours were a whirlwind for us tonight, but my God, the people he’s going to help will have years of a whirlwind, devastation, and loss. It makes my heart very heavy for them, and also very proud of my husband.”

In Bowling Green, Kentucky, the recently opened Ball Aluminum plant in Trans Park, an industrial area in the central part of the state, sustained heavy damage after its roof caved in.

Rainwater from the heavy storms came rushing in through the roof, said Tom Riffel, a manager who was inside when the tornado struck.

The Crown Cork and Seal plant, which also makes aluminum cans, the TMS Auto plant, and the General Motors Corvette plant also were damaged by the tornadoes, Riffel told The Epoch Times.

“There was a lot of damage to our structure and water was just pouring in,” Riffel said. “We’re lucky to still have a plant to go back to.”

As he was leaving work on Dec.11, Riffel recorded videos of some of the tornado damage done to the area.

Scott McCarty, a spokesperson for Colorado-based Ball Aluminum, told The Epoch Times on Dec. 13 that some compressors on the roof of the plant had been torn off.

“All of our employees and their families are safe, and we’re most thankful for that,” McCarty said.

“We’re assessing the damage to the plant right now. We probably had less damage than a lot of people, compared to damage at the plant and our tech park. The power to the plant was supposed to be turned back on today, and that will help.

“We’ve been working with our team out there, and they’ve done an outstanding job,” McCarty said. “The workers had a warning before the tornado hit, and they were able to shelter in place. Now, we’ll all work together on moving forward.”

Bowling Green is the home of the National Corvette Museum, a 115,000 square-foot facility close to the General Motors Corvette Plant.

While the museum wasn’t affected by the tornado, its outdoor Motorsports Park was heavily damaged and will be closed until further notice, Stephanie Morrill, director of sales and guest operations, told The Epoch Times.

Morrill also said that a lot of homes in Bowling Green were either destroyed or heavily damaged.

“This was devastating to our community, but we were blessed that it wasn’t worse.”