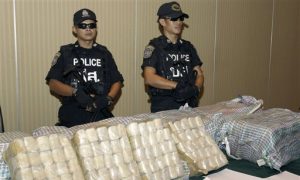 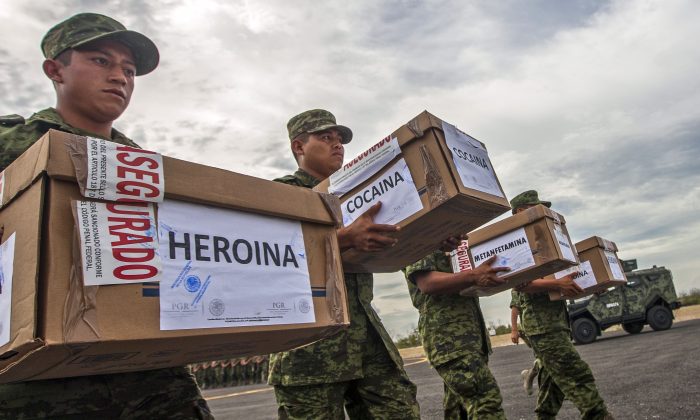 Members of the Mexican Army carry boxes with heroin, cocaine and methamphetamine to be incinerated at a military base in Monterrey, Nuevo Leon state, on August 23, 2013. (Julio Cesar Aguilar/AFP/Getty Images)
US

Midwest Meth-Making Down, but Mexican Imports Fill the Void

ST. LOUIS—The manufacture of methamphetamine is sharply down in certain Midwestern states that have had the most trouble with the drug over the years, but it remains as popular as ever with users due to an influx of cheap Mexican imports, according to experts.

Laws restricting the sale of an ingredient found in many cold medicines and key to making meth seem to have had their intended effect: The Drug Enforcement Administration doesn’t provide partial-year data on meth lab seizures, but drug fighters in several states that generally register the most meth lab busts said they’ve seen a startling decline.

Missouri is on pace for 40 percent fewer meth lab seizures this year than last, according to Missouri State Highway Patrol data. Oklahoma busts are on pace to drop 33 percent, while Tennessee’s are down 48 percent.

The steep decline doesn’t mean users are turning away from the highly addictive drug.

“What we’re hearing throughout the Midwest from our colleagues is they’re all seeing meth labs drop, but it’s critical to note that no state is saying meth use is down,” said Mark Woodward of the Oklahoma Bureau of Narcotics. “It’s just that they’ve switched sources from cooking it to importing it.

“Meth use and addiction are still epidemic,” he said.

The number of meth lab seizures nationwide peaked at nearly 24,000 in 2004. The problem got so bad that restrictions were placed on the sale of cold and allergy pills containing pseudoephedrine, which gets mixed with household products like lighter fluid or drain cleaner to make homemade meth. Those medications were placed behind the counter, with buying limits and tracking of sales.

By 2007, fewer than 7,000 meth labs were seized across the country. Makers and users responded by finding a way to make meth with fewer pills—a dangerous concoction typically mixed in a 2-liter soda bottle. This “one-pot” or “shake-and-bake” method led to more people making the drug and a corresponding spike in busts, with the national total back above 15,000 in 2010.

Laws got even tougher. Oregon, Mississippi, and some cities and counties in high-meth states began requiring a prescription to buy pills containing pseudoephedrine.

By last year, seizures had dropped to around 9,500, according to DEA statistics.

Seizing the opportunity provided by the tougher enforcement of homemade meth in the United States, Mexican cartels have turned to an old recipe known as P2P that first appeared in the 1960s and 1970s, experts said. It uses the organic compound phenylacetone—banned in the United States but obtainable in Mexico, according to the DEA—rather than pseudoephedrine.

As a result, the purity of Mexican meth rose from 39 percent in 2007 to essentially 100 percent, Jim Shroba, special agent in charge of the DEA office in St. Louis, has said. Meanwhile, the price dropped by two-thirds.

Tennessee, which has often been No. 1 or No. 2 in seizures, is “seeing a significant influx in availability of Mexican meth,” said Tommy Farmer, director of the Tennessee Methamphetamine and Pharmaceutical Task Force.

“And they don’t have to risk blowing up their lab or getting caught at a pharmacy,” he said.

For more than a decade in the early 2000s, Missouri was the national leader in meth lab seizures. But data from the Highway Patrol for the first six months of 2015 shows Missouri with 314 seizures, on pace for 628. That would be a big drop from the 1,045 seizures last year. Just three years ago, Missouri had more than 2,000 meth lab seizures.

Nearly a quarter of the seizures this year have been in Jefferson County, just south of St. Louis. Jefferson County Sheriff’s Department Cpl. Chris Barker said his county is aggressively out to rid the labs because of the dangers they cause to children in homes where labs exist, to police, and to other innocent people exposed to them.

Labs aren’t declining everywhere. Indiana had 1,488 seizures last year and is on pace to see a nearly 4 percent increase in 2015, said Niki Crawford, Indiana’s meth suppression director. Michigan is on pace to equal the 860 it had last year, said Steve Spink, meth coordinator for the Michigan State Police.

Crawford said Indiana has been slower than neighboring states to adopt measures to limit the sale of pseudoephedrine.

“Pseudoephedrine is still easy to get ahold of, unfortunately,” Crawford said.