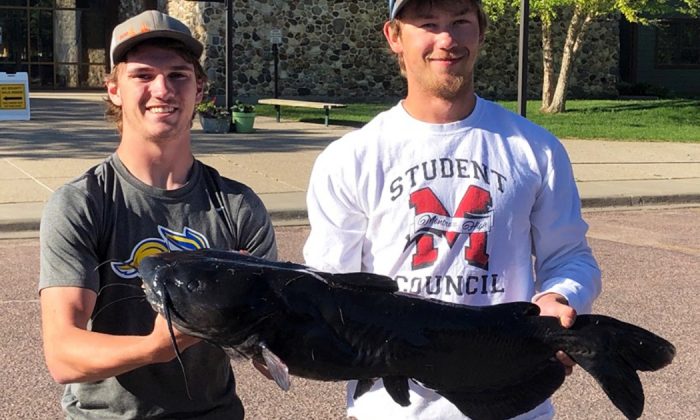 “Cody Sechser and Isaac Kipp both were able to stick an arrow in this monster and therefore will both be the newest state record holders,” the group said on Facebook. “This 24 lb 12 oz giant was shot out of a shallow section of Skunk Creek … there have been numerous hook and line records and this is our first archery record.”

The Bow Fishing Association of America (BFAA) went one step further to call the 38.5 inch long catch a new world-record on June 18, according to The Associated Press.

The BFAA confirmed the latest record catch was more than a pound heavier than the previous record of 23 pounds, which was set just a fortnight before Sechser and Kipp made their catch, according to AP.

Sechser, Kipp, and their friend Riley Scotting caught the giant catfish about an hour into fishing. Scotting, who did not have a bow, saw the fish near some rocks in water that was about 1 foot deep.

They were unsure whether the fish was actually rock until noticing it had whiskers or fins, so Sechser claimed to shoot the fish in the spine and Kipp shot it behind the head, killing it instantly.

“For a solid two hours I thought I was dreaming,” Sechser said, according to AP. “It didn’t even seem like it was real. To be honest, I didn’t even sleep that first night.”

An evening of carp shooting turned into a world record channel catfish for a couple Montrose young men. 🐟

They took the fish to the Lake Time Steak House and Bait Shop on Lake Vermillion to accurately weigh it the same night and again in Montrose the following day.

They thought the fish might break the world record, so they sent a video of the weigh-in to the BFAA, which confirmed it was true.

After hearing the good news, Sechser celebrated by filleting the catfish and frying it up.