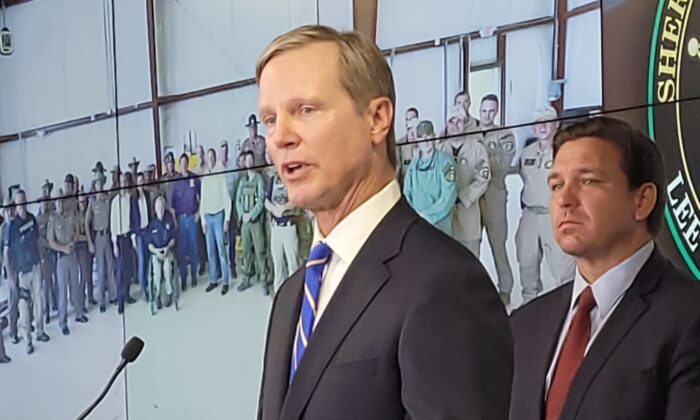 Florida’s newly appointed public safety czar says he is frustrated with the Biden administration’s border policies and the fact that hundreds of illegals are being “dumped” onto Florida soil.

Larry Keefe says the illegal aliens are a burden to taxpayers and, if they commit crimes, to state and local law enforcement.

Keefe was appointed in September as Florida’s public safety czar. He told The Epoch Times that the federal government is flouting the law and is “making immigration policies because they couldn’t enact them legislatively.”

He said there is not an “official count”, but more than 70 private charter flights have been reported coming into the Jacksonville airport with at least 36 passengers aboard each flight.

“This is not haphazard that these people are coming here this way,” Keefe said. “This is a precision, military-like operation where they are coming in a covert and clandestine way.”

Keefe said that the flights land “in the middle of the night” and the people are met by “handlers” who escort the unaccompanied minors on to chartered buses and are “dispersed throughout the I-10 and I-95 corridor and go as far down as Miami.”

“This number [70] is what we currently know, not counting what we don’t. It’s very frustrating,” he said. “Because only the feds can take action against immigration.”

Keefe said he is trying very hard not to call this an “investigation”, because immigration is a federal act not a state one, but the federal government leaves the states no choice but to “defend and protect themselves.”

He said that he is “receiving reports” and cannot open an investigation until “you have proof of a crime.”

It is Keefe’s belief that Jacksonville was not randomly chosen, but targeted because of its central location and its close proximity to the two interstate systems.

“These flights are “secret and stealth” and the state of Florida has no warning that they (illegal immigrants) are being resettled here, because private non-profit, sometimes religious agencies, are being utilized—and are paid in grants funded by the federal government—to take the immigrants and resettle them throughout the state of Florida,” he said.

“Border patrol is overwhelmed,” Pushaw told The Epoch Times. “There is no effective vetting as to who these people are coming into our country.”

Florida governor Ron DeSantis has reacted with an executive order and appointing Keefe.

The borders are overwhelmed and “cannot properly vet these immigrants,” he said recently. “They have no identifying papers when they get here, so there is no way to tell who someone is, or how old they are.”

The governor explained that this is how some of the immigrants get past border security, such as in case of the man who told authorities that he was 17 and was processed as an unaccompanied minor.

He later turned out to be 24 years old and is currently facing a murder charge over the death of  his benefactor, who was trying to help him build a new life in Florida.

“The federal government is the curator of information where the illegals are concerned,” Keefe continued. “The state of Florida only know what the feds will tell them and what the illegal alien is willing to tell them.”

Keefe said that often illegal immigrants will “stay under the radar” to the point that they become “victims” of other illegal cartels.  This puts undue hardship on state and local law enforcement agencies, he said.

“This is only going to be bad for law enforcement morale,” Keefe said. “They can’t deport them, because they have no power to do so, they have to stand down and let it happen.”

DeSantis signed an executive order in September to help combat the wave of illegal immigrants entering the state without warning.

The governor said he initiated the order because the influx of illegals is taking its toll on taxpayer dollars and overwhelming state agencies.

“This executive order makes it clear that Florida resources will not be used to “prop up the failed open border agenda enacted by this administration,” he said in September.

“The states, including Florida, bear the brunt of this cycle. Over the coming weeks and months, our state agencies will be addressing the impacts illegal immigration has had on our state.”

Keefe said if “people are illegally in the state, and they have broken (state) laws” they will be punished.

The Epoch Times reached out to the U.S. Department of Homeland Security, but phone calls and emails were not returned by press time.