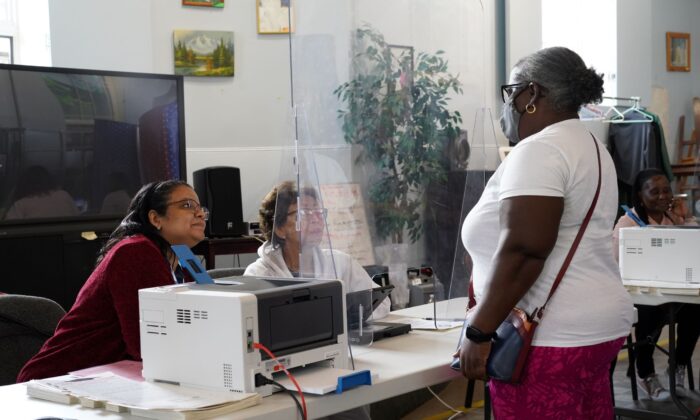 Carlos Quinones, a Middletown resident, complained outside the voting site that so few people showed up on the primary election day, Aug. 23.

This is New York’s second primary of the year, which split from the usual June primary under a court order following a legal dispute over redistricting. Congressional and state senate races were on the August ballots.

By early afternoon, about 100 people had cast votes at Middletown Senior Center—the city’s only voting site, according to a poll worker.

“A lot of people only come out one time every four years for the presidential elections, but guess who makes the deal? The Congress. If you don’t vote for Congress, if you don’t vote for House of Representatives, you are not voting,” Quinones told The Epoch Times.

Quinones moved from Queens to Middletown for the lower cost of living after he retired in 2011.

An immigrant from the Dominican Republic, he mostly voted for Democratic candidates. He thinks the Democratic Party stands for immigrants and the minority population.

For Richard Monks, another Middletown retiree, electability is very much on his mind in this election cycle.

He voted for Pat Ryan in the 18th congressional district Democratic primary. He spoke of Ryan, “He is not as progressive as the other two, but I think he is the most electable in the general election. I did something I don’t usually do. I voted for the most mainstream Democratic candidate. ”

“This is not New York City. This is not the most progressive area in the state. We don’t need another Alexandria Cortez up here because I don’t think she could win the general election,” Monks added.

The 18th district, which covers all of Orange County and much of Ulster and Dutchess counties, is one of a few open congressional races in the state and is considered highly competitive. Sean Maloney, the five-term Democratic incumbent, decided to run in the nearby 17th district following redistricting.

Ryan won the primary by 28,881 votes, or 83 percent, according to the New York State Board of Elections. The other two Democratic candidates in the race, social justice advocate Aisha Mills and financial sector examiner Moses Mugulusi, received 4,459 and 923 votes, respectively.

As for Vincent Crescenzo, a Middletown City School District board member and retired special education teacher, his top concern is access to abortion in a post-Roe v. Wade world.

“I don’t believe in abortion as birth control, but if a mother is in danger or if there are mitigating circumstances such as incest and rape, no problem whatsoever,” Crescenzo told The Epoch Times.

He likes to see contraceptives available to more people and contraception taught in schools at the appropriate grade levels. That will limit the need for abortion as a birth control method, he said.

‘I Vote Every Time’

For Claire Wittman, a lifetime Middletown resident, the war in Ukraine concerns her most.

“I understand we should be sending more help. I understand why they can’t do more, but somebody has to stop this. Because what if it happened to us? What if someone invaded our country? I only wish that more Americans would care more about it,” Wittman told The Epoch Times.

Her other top issue is the breach of the Capitol on January 6. “I think people on the January 6 panel are doing a magnificent job, and this should be brought to the attention of all Americans,” Wittman said.

Wittman’s friend Sonia Anderson agreed. “I can never believe that people would storm the Capitol. That is the last place … I think.”

Anderson came to the U.S. from Jamaica on a green card and became a naturalized citizen in 2000. Since then, she has never missed a vote.

“I am proud to be an American citizen. I vote every time, primary or general. If I have to have surgery, I will postpone the surgery to come to vote,” Anderson told The Epoch Times.