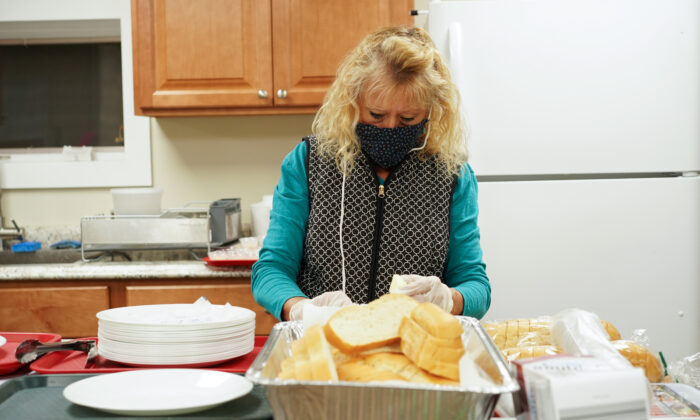 Alexis Dunning works at a Family Dollar store, but her back pain and anxiety make it hard for her to do long hours. She struggles to make ends meet.

As winter inches closer, she finds herself homeless again.

She was among 17 homeless people who took shelter at the only overnight warming station in Middletown on Nov. 21, the station’s opening night for the 2022-2023 season.

“When I come here, I interact with a lot of people,” she said of the 30-bed station. “There are times when I feel at my lowest, but I know I have people I can talk to and that I have a place.”

Each guest at the station gets a backpack of supplies, a box of fresh blankets, a cot to spend the night on, and free dinners and breakfasts. They must enter between 9:00 p.m. and 9:30 p.m. to be admitted.

This is the second year the warming station has opened at the newly renovated, city-owned location on Mulberry Street. The Greater Middletown Interfaith Council has run it for 15 years.

The station offers not only a temporary roof over one’s head on cold nights but also a doorway to services such as mental health and addiction, as well as professional help in applications for food stamps, Social Security income, and housing.

Rector Victor Sarrazin of the Grace Episcopal Church told The Epoch Times, “Part of the problem is that when people end up in dire straits, they don’t know where to turn or how to navigate the bureaucracy.”

In the past, the station helped people apply for security deposit assistance from the Department of Social Services so that they could afford a place of their own, according to Michele Duggan, co-chair of the station coordinating committee.

“Many people can make enough money to make a monthly rent, but they just can’t save that first security deposit—that’s such a hurdle for a lot of people,” Duggan said.

The Orange County government helped 10 people at the station get housing in the past year.

“That’s what we are here for. It would be perfect if we didn’t have to have a warming station,” Marilyn Pierce, co-chair of the station coordinating committee, told The Epoch Times.

The station has four paid staff and a long list of volunteers, including members from nearby churches and students from Touro College.

Doug Pierce, a member of St. Paul United Methodist Church, has volunteered at the station for years.

The station not only helps the homeless but also residents in an emergency, he said. He remembers an elderly couple who came to the station because their gas furnace broke down; they stayed for two days until they got the heating system fixed.

His wife, Marilyn Pierce, is a retired teacher and started helping at the station 10 years ago.

“I’m very fortunate. I have a roof over my head, I have a supportive husband, and we have plenty to eat,” she said. “I just love to help.”

Matthew Airall started volunteering at the station years ago and now works as a paid station manager.

“I guess it is part of human nature to be kind and love. It is just heartbreaking to see someone out there in the cold,” he said. “Sometimes there may be rough patches, but we keep coming back and do it.”

The station opens the door to almost anyone, including those who are drunk or high on drugs, as long as they don’t bother anyone, Airall said.

If anyone violates the station’s policy and drinks or uses drugs inside, the staff will call the police, he added.

About 15 years ago, a man froze to death in nearby Scotchtown, which moved the Greater Middletown Interfaith Council and its leader Joel Shwab to set up the warming station in Middletown.

When COVID-19 hit the area, and a larger space was needed for proper social distancing, the station moved to the basement of Temple Sinai.

That decision caused a stir among nearby residents, who went to the city hall to demand more public input on the location of the warming station.

During the pandemic, the city of Middletown used a federal COVID response grant to renovate a city-owned property for the warming center.

The city leased the location to the station for five years at almost no charge.

Middletown Councilman Gerald Kleiner told The Epoch Times that Mayor Joseph DeStefano was instrumental in making this happen and that the council was pleased to provide the location.