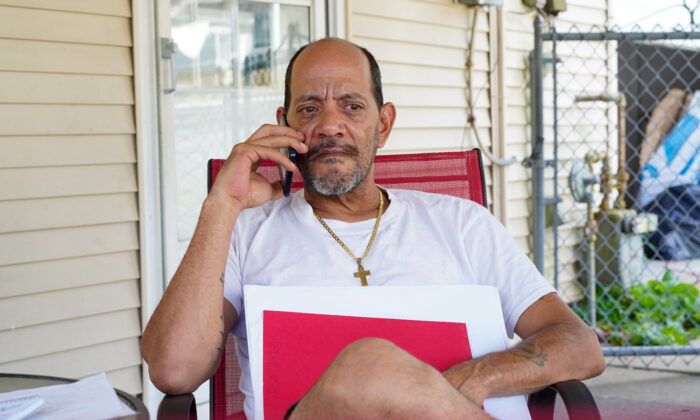 Over the five years of searching for missing persons on the streets and in the woods, Domingo Ramos has learned to ask more of himself and less of others.

Even so, when the recent news of a Port Jervis young woman’s death got more shares on Facebook than the news of her gone missing, it still got to him, big time.

“If more people had shared the news of her missing, we might have been able to find her sooner because it doesn’t matter who went missing, somebody knows,” Ramos told The Epoch Times while sitting in front of his house on Aug. 25.

“People won’t understand unless this happens to them, but we keep moving, we keep going, because what if this was my daughter? I would post her name everywhere, everywhere,” he said.

That young woman is 22-year-old Brittany Hendershot, one of four women reported missing in Port Jervis this summer. Among the other three, two were found safe, and one is still missing.

Ramos and his volunteer staff had been looking for Hendershot for weeks before her body was found in the woods of Wallkill town by Port Jervis police and state police on Aug. 15.

Ramos’ search was independent of that done by law enforcement agencies. He develops his own network on each case for soliciting tips, which could come via phone or social media. If a particular tip leads to a dead end, he marks it off; if a field visit produces usable information, he jots it down for future reference.

Whenever he discovers what he thinks is solid information, he passes it on to the police.

Though Ramos understands that police cannot share their investigations with him, he still hopes police could find a way to include volunteers like him in their search efforts.

On a recent day, about two hours past midnight, Ramos got a call offering a tip on Hendershot’s whereabouts. He immediately jumped out of bed and drove to the city of Newburgh.

Ramos is a former private investigator who knows a thing or two about what to look for on a search. He emphasizes searching in the woods for clues such as footprints, clothing, or needles. He looks at tree branches and bushes for signs of people passing.

Hendershot’s mother, Crystal Hendershot, called Ramos almost daily. Ramos’ help to the families of missing persons extends beyond searches: he always picks up their phone calls, puts his number on flyers to protect them from potential scammers, and speaks to the media on their behalf to lessen their burdens.

“We put ourselves out there to take the stress, so there is less stress on the families. We know what they are going through,” Ramos said.

During the months between Hendershot’s missing and her body being located, Ramos and his team developed a strong bond with her family. They went to Hendershot’s vigil, visitation, and funeral last week.

“My staff got really attached to her. She was a young woman with a 3-month-old baby. It is one of those cases that we spent a lot of time on,” Ramos said.

The Hendershot case is also one of the few cases that Ramos worked on that resulted in known deaths. The majority of his three dozen cases so far were runaway cases, of which he helped locate about 15 persons; for the rest of the cases, the persons remain missing.

Ramos once helped locate a Middletown girl within hours of her going missing. The girl’s sister told him that the girl ran away after not getting her way. Soon, he found her at a friend’s house in Port Jervis.

“Time is against us, especially when it comes to a minor. A simple runaway case could turn into a sex trafficking or kidnapping case. There are predators out there. There are sick people out there,” Ramos said.

Later, Ramos’ wife, a runaway herself when she was young, had a heart-to-heart talk with the girl.

Ramos said the girl’s sister was honest with him, which helped him find her quickly. He asks the same of all families that reach out to him for help.

Ramos began to invest heavily into locating missing persons in the summer of 2017 when his good friend Elvia Crump’s daughter went missing in Sullivan County.

Ramos grew up with Crump in the College Hill apartments in Middletown as a kid. Crump, a few years older than Ramos, often babysat him. They together attended Middletown High School.

“The Shaniece Harris [Crump’s daughter] case really got to me. I took it more personally than I probably should have. Then every day when I got online, I kept seeing missing persons. I just got more attached to it,” Ramos said.

In 2020, he founded HopeAlive 845 in Sullivan County, 845 being the area code that covers parts of Sullivan, Orange, and Ulster counties. He now has a 16-member volunteer staff, counting Harris’ father.

Neither Ramos nor his staff gets paid through the organization, and the operations rely on donations, he said.

They raised less than $1,000 dollars every year and struggled to stay current on the rent. He said that their current office is slated to close at the end of September.

Two months ago, Ramos moved back to Middletown in the hope of a new beginning for his non-profit organization. Since then, he has worked on four Port Jervis missing person cases out of his garage office.

On Aug. 10, Ramos’ team and the Poughkeepsie police helped locate 23-year-old Cheyenne McBride from Port Jervis in Poughkeepsie, according to a police statement.

He still works on the Heather Callas case. Callas, a 27-year-old Port Jervis woman, was reported missing on Aug. 1 by her mother, Melissa Hadden. Hadden has not seen or heard from Callas since July 2.