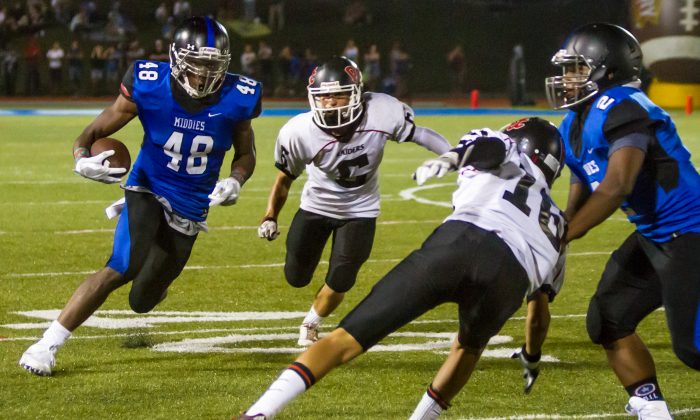 MIDDLETOWN—The Middletown Middies won their third Erie Bell game in a row, not letting the Port Jervis Raiders score at all with a score of 42–0 at Middletown High School’s Faller Field.

From the beginning, Middletown brought an energy to the game that overpowered the shorter and more lightweight-looking Port Jervis players. Spurred on by the home crowd, Middletown’s defense smothered Port Jervis.

Coming into the game, both teams were coming off of season-opening wins. Port Jervis defeated the Goshen Gladiators 28-14 at a home game on Sept. 2 and the Middies a 40-28 win against the Cornwall Central High School Dragons in Cornwall, also on Sept. 2. The complete shutout shows that Middletown kept the momentum moving forward from the past two Erie Bell game wins.

The Erie Bell is the height of a long-standing rivalry between the two high schools. The game’s trophy, the Erie Bell, was once on a train that traveled between Port Jervis and Middletown. The bell now symbolizes the cities’ sports rivalry that is over 100 years old. The winning team of the Erie Bell game gets to keep the bell until they lose the annual match.

The Erie Bell victory this year was led by senior running back Jordan Bryan, who received an MVP medal and trophy at the game’s end.

The Middies’ win this year was the easiest of its last three victories against the Raiders. Even though it was clearly a team effort, led by Coach Bill Donohue, Bryan’s speed and power on the field was one of the most noticeable aspects of the Middies’ offense. He was approached by a Port Jervis staffer at the end of the game  about ways to get noticed by college football scouts.

Bryan hinted that his presence contributed to Middletown’s last three victories in the Erie Bell rivalry. “It feels great that since my sophomore year, since I’ve been on varsity, they haven’t taken the bell from us,” he said.

After three touchdowns and 316 yards of running the ball, Bryan said he’s not relaxing.  He’s now preparing for the upcoming game against Newburgh on Sept. 16, he said.