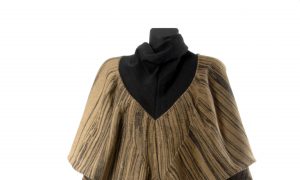 Designing With the Perfect Tool: The Golden Ratio as It Applies to Fashion
0
Share Now
TelegramFacebookTweetEmailTellMeWeReddit
Copy Link
New York

Middletown Has a Cave of Treasures—in Yarn

MIDDLETOWN, New York–The Fiber Trail has an Aladdin’s cave in Middletown. Yes, there is a trail by that name that knitters and people who work in fiber arts go on, to find interesting yarns, share stories and, most of all, make things.

The American Needleworks Studio in downtown Middletown is much more than a yarn shop. It has been a labor of love for owner James Prather who, by his accounts, restored it to its former glory almost single-handedly. On most days, he is at the store either knitting on a beautifully upholstered recliner, ordering unusual stock from all corners of the globe, or running workshops.

Prather started out with a quilting shop “up the road” on North Street, and then an upholstery business for 12 years on the same premises.

After running the upholstery business he thought about retiring, but in the end decided that retirement just wasn’t for him.

He is a purveyor of yarns but admits that sometimes he doesn’t care whether he sells them or not because he looks at everything in the store as part of his “stash.”

“For me they’re crayons. I look at them as a creative tool. Unfortunately, my pocketbook doesn’t like that,” he told Epoch Times, while he was tidying up and pointing out the various projects in the store, which he has set up as a working studio.

So, his approach is different to a normal retails yarn shop.

Set Out To Sit and Knit

The space has enclaves for spinning, weaving, knitting, crochet, and needlepoint. It is set out like a series of cozy living rooms to sit down and just start working. A knitting addict (for lack of a better word that just as accurately describes the fervor with which some people approach the craft) would have a hard time leaving.

In fact during the time that Prather was speaking to Epoch Times, two ladies came in and stopped at the door in awe. One of them who hadn’t been there before, already anticipated the damage to her purse strings as a result of all the yarns that caught her eye—which she said she didn’t need, but were going to be too irresistible to leave behind.

Prather who grew up in Atlanta, Georgia, moved to New York City as a teenager where he lived for 40 years working odd jobs—driving trucks and whatever else came his way.

But one thing was a constant in his life—his love for the tactile quality of fiber and all the potential it is has a creative material.

“I’ve been doing needle art all my life. I started as a kid. I started playing with crochet when I was a teenager, and I taught myself to knit and crochet, then I got into sewing,” Prather explained, adding that it didn’t come from him seeing, or being taught by, any member of his family. It was just something that happened to pique his interest.

At the ripe age that he hasn’t mentioned in exact terms, he confesses: “I still don’t know what I wanna be when I grow up,” with a beaming smile that shows great warmth and unabated zest for life.

Prather ran a quilt shop for 12 years on North Street in Middletown, where he taught quilt-making. In fact one of his students from Middletown won a blue ribbon at this year’s Somers Quilt Show.

Nowadays, he continues to teach classes but they encompass many fiber crafts, focusing on the technical skills at the working studio. He emphasizes however, that for him, “everything to do with fiber is an art. So it is a passion.”

All Things Soft and Wooly

When he spoke to Epoch Times, he had just returned from Peru where he splurged on a baby alpaca sweater that felt like the softest wool. He also found some interesting yarns, such as alpaca bouclé sold to him by someone “just off the side of the road”.

He’s partial to natural fibers, but does sell natural/synthetic blends that are interesting enough either in texture or color. Alpaca wool is becoming very popular and the interest in exotic fibers is growing, while there is also a happy resurgence in knitwear as a craft.

Prather is always on the hunt for unusual fibers that would make it worthwhile for customers to visit the store. He mentioned that although there are alpaca farms in the United States, the scale does not compare with places like Peru where there is a huge industry around alpaca. They are shorn in the same way as sheep and they yield very soft wool.

Of the most exotic wool, yak fibers are also popular but among the most labor intensive to produce because the yaks have to be combed to obtain the wool. Good quality yarn in general is very expensive due to the production costs, explained Prather, but for him it’s all about the texture.

While the Internet has undoubtedly made yarn easier to purchase for amateur craftspeople, texture is the one thing that will make them travel all the way to Prather’s store. He, like many kindred spirits, loves the tactile quality of the craft and explains that “it’s all about the process. I need to touch the yarn to see how it works,” he said.

He also mentioned his love for Middletown, where he has been living for 25 years, many of which have been tough on local businesses. Like many towns, Middletown has been “depressed” he said, but the last two to three years have been “phenomenal” in terms of people returning to either invest in or shop downtown.

This summer, in the spirit of having outdoor activities, he’s emulating the music in the park events but with a twist. Prather has organized the “Knit in the park” all-day event on Saturday, June 13.

This is the second year of the event which last year attracted 60 people who brought their knitting needles and even spinning wheels to sit out in the small park next to the Something Sweet cafe and do what they love best.

“I want people to just sit and knit—it’s a community environment,” he said.