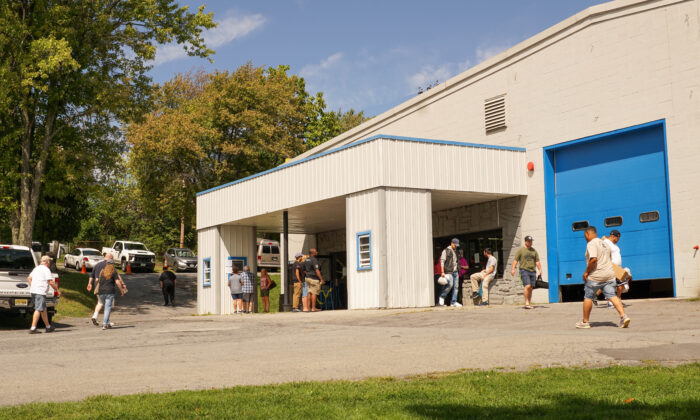 Hardly a week had passed since New York’s new gun laws went into effect when Middletown Gun Show vendor Dom Dimare started to feel the impact on his business.

Sales on both semiautomatic rifles and ammunition have dropped, Dimare told The Epoch Times during a weekend gun show in the city of Middletown on Sept. 10.

Dimare is a trainer with Master Arms, a gun dealer based in Sloatsburg, New York.

He said the new gun laws were to blame. Under the laws, people must apply for a semiautomatic rifle license before purchasing such a rifle, and ammunition sellers must keep a detailed record of every purchase.

“If you are a competitive shooter, you can easily go through a thousand rounds in a week,” Dimare said. “People are worried that if they buy a lot of ammo, the government might investigate their records.”

The records that ammunition sellers must keep include every buyer’s name, age, job, and address, as well as every transaction’s amount, caliber, and manufacturer’s name.

Starting July 15, 2023, sellers that fall short of recordkeeping can be fined $500 on the first offense and found guilty of a Class B misdemeanor on the second offense.

Another ammunition seller told The Epoch Times that he lost around 20 sales on the morning of Sept. 10 simply because people refused to provide personal information.

The seller declined to disclose his name.

“Many told me, ‘You know what? We’ll just go buy in Pennsylvania. They don’t ask for our driver’s licenses for ammo,” the seller said.

After being in the gun show business for two decades, the seller plans to quit later this year and become a police officer in Virginia next year.

“You saw the writing on the wall. I’m phasing out. I am done with the whole thing,” the seller said.

Peter Van Voast, who has helped the seller at gun shows for years, told The Epoch Times that the traffic at this year’s Middletown Gun Show was probably only a third of that of past years.

“The laws are an impediment to our business,” Voast said.

Another firearm seller based in Stamford, New York, told The Epoch Times that he hadn’t sold a single semiautomatic rifle on the morning of Sept. 10.

“So far, I haven’t met a single person who has a semiautomatic license at the gun show,” the seller said.

The seller declined to disclose his name.

People can apply for the license to the licensing officer in their cities or counties. Those with a handgun license can simply have their licenses amended to include semiautomatic rifles.

Anyone of legal hunting age can still borrow a legal semiautomatic rifle for hunting.

The Middletown Gun Show is one of the largest gun and knife shows in the Hudson Valley. The next show will take place at the city’s Orange County Fairgrounds on Nov. 5 and 6.