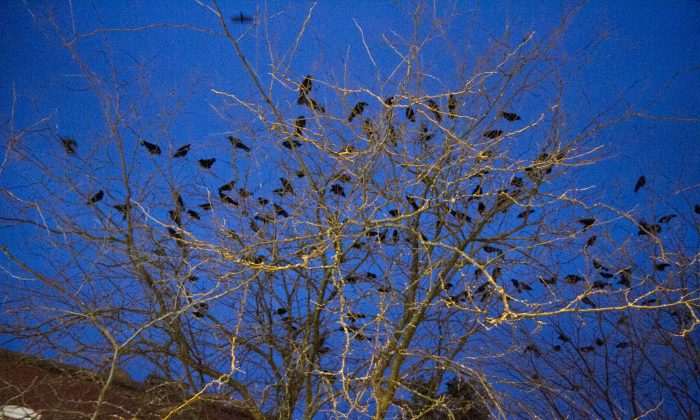 Crows in a tree on James Street in Middletown on Jan. 14, 2016. (Holly Kellum/Epoch Times)
New York

Warmth, light, and gun laws could be bringing them into the city
By Holly Kellum

MIDDLETOWN—Depending who you ask, the number of crows that congregate in downtown Middletown every winter are worse or about the same as previous years.

“Generally as the weather gets cold, they will leave en masse as it gets very, very cold. But this year it didn’t get cold,” said Director of the downtown Business Improvement District, John Degnan and the city’s resident crow expert.

The crows, which come in the thousands starting in the fall, roost on tall buildings and trees, leaving behind a blanket of bird poop wherever they roost.

Department of Public Works worker Deshaun Green, who was cleaning the sidewalk with a mix of water and antifreeze on a cold Friday afternoon, estimated four out of five days a week two DPW workers are out there power washing the sidewalk.

“In two days it will look like we never touched it,” he said.

Business owners in the downtown complain about the mess the birds leave on their sidewalks, and anyone who has parked a vehicle in the wrong spot after dusk can expect to find an unpleasant surprise on their car.

“They’re a nuisance,” said Middletown Press owner, Jo Cover. “They land on the Paramount Theatre, so if you’re in this parking lot [by the Paramount] and they’re flying around, you’re going to get it.”

In two days it will look like we never touched it.
— Deshaun Green, Middletown DPW Worker

She and the other downtown business owners have come together and bought about half a dozen Bird Gards—machines that project the sound of predatory birds—and placed them around the downtown to scare away the crows.

They have had the machines for several years, and some years they have worked, Degnan said, but this year they seem to be scaring the people more than the crows.

“A lot of people complain about the sound [of the Bird Gards],” Cover said.

One year, the city hired a company to release falcons in the downtown, which worked, according to Mayor Joseph DeStefano, but it was expensive, and to be effective it has to be done early in the season.

“It’s almost like behavior modification. Once they’re not fearful of something and they find a way in—you have to deter them from getting in originally,” he said.

That seems to be the case at SUNY Orange, which has also traditionally attracted a lot of crows. The last few years they have not been a problem there, possibly a result of early use of the college’s eight Bird Gards.

Once you stop them from settling in, you’ve got a shot.
— Mike Albright, Communications Officer, SUNY Orange

“Once you stop them from settling in, you’ve got a shot,” said Mike Albright, the communications officer for the college.

He said one year they tried to move them once they were already settled, but no matter what they tried, nothing worked. It cost the college a lot of time, money, and manpower to clean up the mess, he said, so they are grateful the Bird Gards have been working the last several years.

“It took a lot of effort from our facility folks and contractors to get it [the poop] cleaned up,” he recalled. “Between the mess and the smell, it was pretty bad.”

Because the downtown Bird Gards failed this year, the city is trying a new tactic. It has ordered two strobe light-like devices for Festival Square, where the crows are centralized, and plans to install them as soon as they arrive, said DPW Commissioner Jacob Tawil.

“When you flash lights at them, they go because they feel threatened,” he said. “When we had the power outage here, I was outside in the dark and I shined a light on the crows in the trees and they all took off.”

There have been suggestions of cutting down the trees to take away their roosts, and some cities have used pyrotechnics like firecrackers or firing blanks, but for quality-of-life reasons, Tawil said, the city decided against those options.

“We want to encourage more trees here, not to cut down trees,” he said.

Degnan estimates the crows have been coming en masse for about the last 10-12 years, a trend that has been happening in other New York and Orange County cities as well.

“Roosting in urban areas is a nationwide phenomenon, not just in Middletown,” said SUNY Orange professor and ornithologist Joseph Zurovchak. “As the rural landscape became more developed in the past several decades and transformed into urban/suburban areas, during the winter months crows began roosting in urban areas.”

One of the theories as to why they are here is that the city is relatively warmer than the country, which would explain why they come in the colder months. Part of the reason there are so many crows is because they are partially migratory, meaning some crows, mostly from northern regions, migrate into southern regions where it is warmer, while the southern crows stay.

Another theory is that they are attracted to the lights, which helps with their poor night vision and seeing their biggest predator, the Great Horned Owl. The fact that they come into the city at dusk and leave at dawn seems to support this theory.

Owls could also be a reason why they roost communally, said Dr. Kevin McGowan, an ornithologist at Cornell University who has studied crows. “Their chances of any one being killed by a great horned owl at night are low [if they are together],” he said.

Another of his theories is that cities offers protection from their second greatest predator, humans. Given the intelligence of crows, it is possible they have figured out that gun laws are stricter in the city, and thus their chances of being shot at are lower.

Tracy Racine, the owner of Any Old Thing in downtown Middletown mimed loading and shooting a shotgun when asked what he thought of the crows outside his shop. In reality, he resorts to clapping his hands or banging on a pot to chase them away, which “they don’t like,” he said, but acknowledged they come back within minutes.

It is possible they have figured out that gun laws are stricter in the city.

Middletown has a lot of what crows look for in a city, which are fairly large trees with good visibility, and an urban area surrounded by agricultural fields, McGowan said. That they were coming into the city to eat from open dumpsters or food waste on the streets is unlikely, he said.

“Crows do make use of refuse and available food sources in urban areas but that’s not what’s attracting the big roosts,” he said.

While annoying, the bird poop is not a public health hazard and despite their bad name from Alfred Hitchcock’s “The Birds,” crows do not attack people.

Degnan and DeStefano were quick to point out that the crows’ presence has not deterred people from coming to the downtown and patronizing its businesses.

“We seem to be getting more and more people [downtown],” Degnan said. “The tree lighting ceremony was one of the largest crowds ever, and then the movies—there have been several movies here that have been drawing larger crowds too every night.”

The problem is in how you look at it, McGowan said. Crows in cities are now a fact of life and learning to live with them is probably better than chasing the dream they will one day go away.

This may be an evolving game between crows and humans for the next 100 years or so.
— Kevin McGowan, Professor, Cornell University

He said if a city is an attractive place for crows, which Middletown is, it is likely they will keep coming back. And while he said there has been a measure of success using a combination of pyrotechnics, bird effigies (real or fake dead crows), and laser lights, there may be no silver bullet.

“These are adaptable animals,” he said. “What probably is going to happen is we’ll be able to circle back and use things that used to work that aren’t working now, or that could work now but didn’t work 10 years ago.”

He thinks managing where they congregate is a wiser option than trying to make them leave the city completely, and likens it to a group of teenagers—you can control where they hang out, but you can’t keep them from hanging out.

Complicating everything is that crows move throughout the winter, so while they may be in a relatively benign spot initially, that could change mid-winter, and vice versa. Degnan said the crows usually go to the woods behind the sewer treatment plant when it gets cold.

“This may be an evolving game between crows and humans for the next 100 years or so,” McGowan said. “This has only been a problem for about 20 years, so we don’t have long term solutions, we don’t know what the ultimate thing is, and there may be no ultimate strategy.”