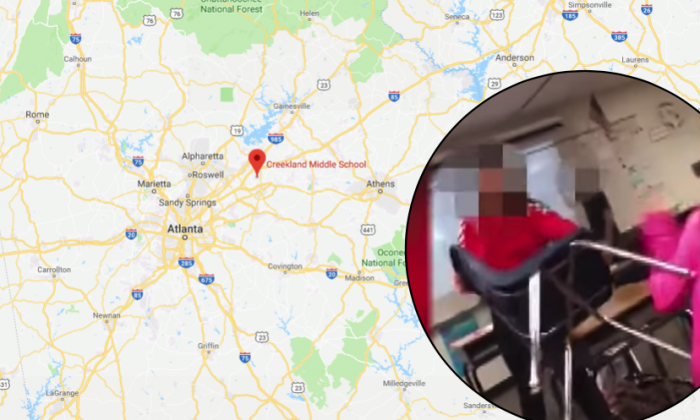 A Georgia middle school student is facing criminal charges after allegedly striking another student with a chair. The attack that was captured on video and posted on social media.

The footage shows a Creekland Middle School seventh-grade student using a chair, and later her hand, to hit a fellow student on Monday, Jan. 22, 11Alive reported.

Gwinnett County Schools in Lawrenceville, a suburb about 30 miles northeast of Atlanta, has reportedly confirmed that the individuals featured in the video are their students.

The incident took place near the end of the school day, with the victim bringing the attack to the attention of school staff.

In the video, a girl in a pink shirt sits at her desk while another student swings at her with the chair and then pokes her in the shoulder. As the victim appears to sit in distress holding her shoulder, the student who hit her with the chair comes back and strikes her with her hand.

There appears to be no teacher in the room.

According to 11Alive, the school district has made it clear that such behavior is unacceptable and has pledged to take action.

The principal at Creekland Middle School sent a message to parents regarding the incident.

Principal Eddie Maresh stated that school authorities have taken “disciplinary action with the student who struck the other student and she is facing criminal charges.”

“In addition, as this situation did occur in the classroom, we are addressing this issue with the teacher of the class.” Maresh said.

While student-on-student violence is the more common type of assault in schools, incidences have been noted of teachers falling prey to abuse by students.

According to Simcoe.com news, teacher Julie Austin was struck in the head by a student wielding a chair. A brain injury sustained in the 2014 assault has prevented her from working ever since.

Simcoe County teacher speaks out on being hit on head with chair by student | https://t.co/SwnjyTNGNv https://t.co/TrWJ0GOhvh

The woman was working as a grade 4/5 instructor at Holy Cross Catholic School in Innisfil, Ontario, Canada, at the time of the attack.