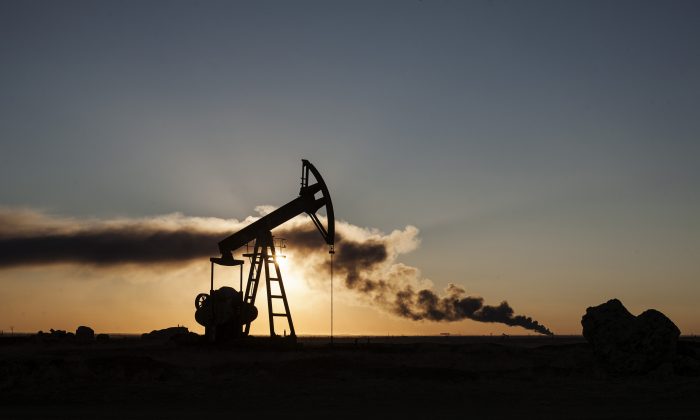 Smoke is seen rising from the the burning leftovers of an oil refinery over oil fields near the oil rich city of Ramlan, on Oct. 20, 2013, near the Syrian Kurdish town of Derik. Syria's oil industry has been massively hit since an uprising against the rule of president Bashar al-Assad erupted in March 2011. (Fabio Bucciarelli/AFP/Getty Images)
Middle East

Middle Eastern Economies: Outlook, Policy Options, and the US Role

On October 1, 2014, a group of Middle East Institute (MEI) scholars met to discuss the issue of Obama’s legacy regarding Middle East policy, with a focus on prospects for his final two years in office. This paper, written by Zubair Iqbal and the eighth in a series, discusses Obama’s legacy in regard to Middle Eastern economies. The paper reviews the current state of play, describes the likely drivers and dynamics, points out opportunities and pitfalls, and offers conclusions.To read the capstone paper in the series by Allen Keiswetter, click here.

Economic trends will provide a very important part of the context in which President Obama’s policies play out in the remainder of his term until January 2017. The Middle East’s economic recovery from the 2008-2010 global economic crisis has been mixed. While major oil exporting countries have made a solid recovery, most of the oil importing countries continue to struggle, which reflects, in large part, regional political and security issues, the inability of governments to implement difficult policy reforms, and continued slow global growth. The increased financial support from some major oil exporting countries has helped a number of oil importing countries to stave off economic challenges. However, underlying conditions remain highly vulnerable to domestic and external risks. The near and medium term economic outlook is fragile and, unless addressed vigorously, could heighten regional political and security instability.

A more activist U.S. involvement in addressing underlying factors will be crucial and is in the United States’ strategic interest. Such involvement should not only help facilitate the provision of adequate financial resources but also the political reforms that are needed for an orderly transition to sustained growth and employment. More importantly, U.S. support, in collaboration with multilateral lending agencies and regional players, will be crucial in encouraging oil importing countries to pursue appropriate economic policies that would allow a more efficient use of external assistance and the mobilization of domestic resources to phase out extraordinary dependence on external financing. This will require a delicate balancing of political and economic reforms in the oil importing countries so that they reinforce each other. Institutional reforms that help allocate oil exporting countries’ generous financial support more effectively and help in the mobilization and use of domestic resources in the oil importing countries will be highly beneficial.

The anticipated economic recovery in 2014 of the oil importing Arab countries has turned out to be weaker than expected because of heightened regional security concerns, continued political uncertainty, weak economic policies, and slower global economic recovery. Most of these economies are now expected to grow by less than 3 percent in 2014, or at about the same rate as in 2013, well below their potential growth path and what is needed to make a dent in mounting unemployment. [1] Fiscal and external deficits are also estimated to remain large, especially in countries most adversely affected by political upheavals. On the other hand, major oil exporting economies (including members of the Gulf Cooperation Council, or GCC), have so far registered a solid recovery. Notwithstanding the recent softening of oil prices, they are (except Iraq) poised to grow at about 5 percent in 2014 with continued fiscal and external surpluses and a buildup of external reserves. [2] These surpluses have been the major source of financing external deficits of a number of oil importing countries.

The near and medium term outlook has become somber. Should ISIS-related regional conflict deepen, civil war in Syria continue, and civil/political discontent persist, with the associated market uncertainties, the next two years and the medium term will probably see more pronounced negative effects on the oil importing economies, especially those dependent on tourism and external financial support. If the negative effects of the ongoing Syrian and Libyan conflicts on neighboring countries—Egypt, Jordan, Lebanon, and Iraq—are an indicator of the broader ISIS-related conflict’s effects, and if policy reforms are further delayed, growth in most of these economies may not recover from the low levels in 2014. These countries will likely see capital flight, lower investment, pressures on the exchange rate, and—above all—diversion of government outlays away from productive activities with adverse effects on the governments’ ability to generate employment opportunities. In the absence of politically difficult domestic policy reforms, macroeconomic imbalances will deepen and external financing requirements will increase; these are presently projected to rise from over $50 billion in 2014 to $60-65 billion in 2015-16.2 Such gaps will be difficult to fill.

Over the next two years, external surpluses of major oil exporting countries will shrink. With the additional burden of regional conflict, rising domestic demand, and lower oil receipts, GCC countries’ ability to finance external imbalances of oil importing economies will also contract. In these circumstances, governments in many oil importing countries will have less room—financially and politically—for the needed tougher action to get the economies moving toward a faster pace of growth and the employment generation that are prerequisites for political sustainability.

The longer term outlook is difficult to project. On the regional level, loss of political cohesion, worsening economic conditions, and weakening cultural identity (including sectarian conflicts, radicalization, and deepening of conflicts between the rulers and the ruled) could exacerbate intraregional conflicts. Most of the oil exporting countries will likely run fiscal deficits as oil prices fall and expenditures increase. In the absence of drastic economic reforms in the oil importing economies, growth will remain below what is needed for political sustainability. Even if political cohesion is strengthened and domestic political discords are resolved, national and regional stability will call for substantially more resource transfers from abroad than is presently feasible.

Governments in oil importing countries will continue to be confronted with contradictory economic objectives: reduction in fiscal and external deficits to stabilize macroeconomic positions versus acceleration of growth to address unemployment challenges. While sharply expanded external financial assistance to some of these economies, mainly from some GCC countries, has temporarily staved off crisis, underlying vulnerabilities to external and domestic shocks remain large. In the period ahead, external financial support will likely shrink, highlighting the policy dilemmas in some of these countries.

The authorities in oil importing countries will have to prioritize their potentially conflicting economic objectives and appropriately sequence policy reforms in line with the projected shrinking external support. The short-term fiscal consolidation including expenditure restraints, reduction in subsidies, and increase in revenues—which should form the foundation of any meaningful reform in the near term—may have to be moderated so as not to lose political support and adversely affect growth and employment generation. Increased public sector spending on employment generation and infrastructural development to ease unemployment pressures should be an integral part of reform strategy. In this context, continuation of external financial support—but conditional on specific domestic reform measures—at about the current levels will be critical. Such a reform program should be integrated into a longer term strategy that progressively reduces dependence on external financing, improves market forces to more efficiently allocate resources through a regenerated private sector, and helps develop the financial sector for resource mobilization and investment.

Dr. Zubair Iqbal is a Scholar at the Middle East Institute and a former staffer in the Policy Development for the Middle East and Central Asia Department at the International Monetary Fund.