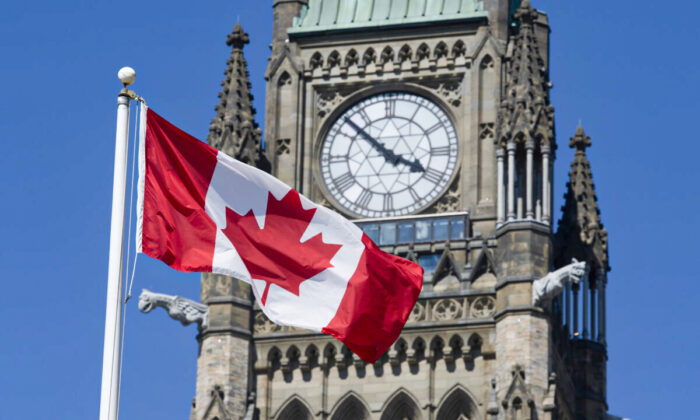 The Canadian flag flies near the Peace Tower on Parliament Hill in Ottawa on June 17, 2020. (The Canadian Press/Adrian Wyld)
Canada

Taxing “the rich” to finance a large expansion of government wouldn’t generate enough revenue to cover federal spending programs, and the middle class would eventually have to chip in, according to a new study.

“If Canadians actually want a much bigger government, they’re going to have to pay for it with higher taxes,” study co-author Ben Eisen, a senior fellow at the Fraser Institute, said in a press release on April 6.

The study, titled “No Free Lunch for the 99 Percent,” noted that taxing the top 1 percent of earners in the country will not generate nearly enough revenue to finance either a major expansion in the role of government, support public finance, or fund broader tax relief for other Canadians.

“To generate sufficient revenue to significantly increase federal spending, Ottawa must raise taxes on Canadians across a broad income spectrum, not just top earners,” Eisen said in the press release.

A review of several studies by the authors found that when governments, be it at the federal or provincial level, raise the top personal income tax rate, they often raise “little” tax revenue in reality, due to the behavioural changes of the top taxpayers.

“This can be the result of reductions in economic activity resulting in less earned income, through changes in tax strategies, and other forms of legal and illegal tax avoidance,” according to the study.

“This reduction in the size of the tax base can either partially or entirely offset the revenue gains from a higher rate.”

In 2016, the newly elected Trudeau government raised the top personal income tax rate by 4 percentage points, from 29 percent to 33 percent. The study’s authors cited a 2018 paper by Alexandre Laurin, director of research at the C.D. Howe Institute, who stated that changes in taxpayer behaviour after the rate hike caused an “erosion” of the tax base, resulting in $1.2 billion of fresh revenue collected by the federal government offset by $1.3 billion in lost tax revenues from the provincial level in 2016.

“The negative impact on provincial revenues is even larger than for federal revenues because the provinces suffer reduced taxable income bases,” Laurin said. “The hike was a revenue loser on a national scale.”

The Fraser Institute study also noted that when governments raise the corporate income tax (CIT) on businesses, the cost is passed on to workers in the form of reduced wages, and on to consumers through higher prices.

“CIT falls largely on individuals who are not high-income earners,” the study said. “A primary reason for this is that … the CIT is divided between owners of corporations, the labour that they employ, and customers.”

Referring to empirical research conducted by Kenneth McKenzie, an economic professor at the University of Calgary, in November 2020, the authors note that labour’s share of the CIT as reviewed by McKenzie ranged between 30 percent and 80 percent.

Comparing the hourly wage rate in Canadian provinces from 1981 to 2018 against provincial CIT rates, McKenzie’s analysis found that an increase in the tax correlates to a reduction in workers’ wages.

“Taken together, these estimates suggest that a 10 percent increase in a provincial CIT rate in Canada is associated with a 1.07 percent reduction in the real average hourly wage rate,” McKenzie wrote.

A “more serious problem” with using the CIT as a revenue-generating tool from high-income earners is that the tax is a “highly distorting and economically damaging form of taxation,” the Fraser Institute study authors argued.

“Each dollar of revenue generated from the CIT reduces GDP substantially more than each dollar generated from more efficient forms of taxation such as well-designed consumption taxes like the GST,” they said.

Noting the increasing calls for an annual wealth tax on high-net-worth individuals in recent years, the authors argued that although a wealth tax can target affluent individuals more accurately than the CIT, administering it can be challenging.

“Returns on capital income are much easier to assess than many forms of wealth—the value of personally owned businesses, for example,” the study said.

“Further, an explicit wealth tax targeted at very wealthy Canadians would not generate very much revenue.”

As an example, the study said that in 2019, the Parliamentary Budget Officer calculated that a 1 percent wealth tax on individuals with a net worth over $20 million would generate estimated tax revenue gains of just $5.6 billion in 2020–21.

“This would be equal to approximately 1.6 percent of federal revenue in that year,” the authors said.