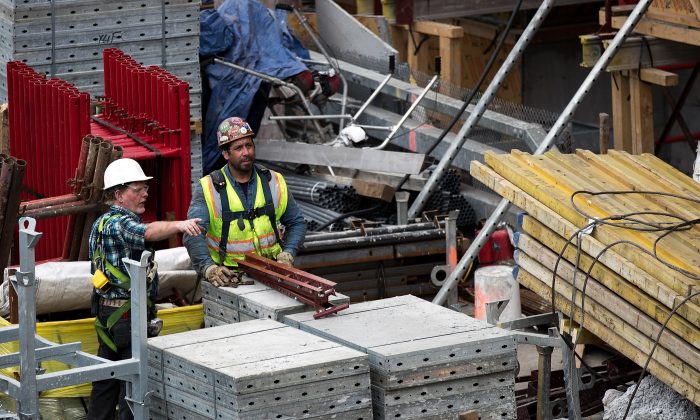 Construction laborers on the site of a new residential building in the Hudson Yards development in New York City on Aug. 16, 2016. (Drew Angerer/Getty Images)
Trump Administration

US Middle-Class Income Rises to Highest on Record

The middle-class American family is on the rise with the median household income for 2017 reaching a record high, a Census Bureau survey has shown.

President Donald Trump celebrated the news on Twitter on Sept. 13, saying middle-class income “will continue to rise (unless the Dem[ocrat]s get in and destroy what we have built)”—alluding to the significance of the upcoming midterm elections that will decide the power balance in Congress.

“Middle-Class Income Hits All-Time High!” @foxandfriends And will continue to rise (unless the Dems get in and destroy what we have built).

Trump has been credited with accelerating economic growth with his tax cuts and deregulation.

The share of Americans without health insurance remained at a steady 8.8 percent.

While the 2017 median household income is indeed the highest since the Census Bureau started measuring it in 1967, the data isn’t completely comparable, since the survey methodology has been updated multiple times.

In 2013, for example, the bureau updated “questions on retirement income and the income generated from retirement accounts and all other assets.” Using the new questions with part of the respondents resulted in median income 3.2 percent higher than from responses to the old questions.

The results are based on the bureau’s annual survey of about 60,000 households. The bureau also measures median household income on another survey, which polls over 2 million housing units a year. That data reaches back to only 2005 and has reported a somewhat lower 2017 figure—$60,336. This one too is the highest on record compared to past data from both surveys.

The improving income follows a pattern of historic economic indicators.

Small business optimism, measured back to 1973, reached a record high in August.

The average unemployment over the past six months dropped to 3.93 percent in August, the lowest since March 1970.

Unemployment for blacks and Hispanics broke several record lows in the past year.

“We are breaking all Jobs and Economic Records,” President Donald Trump said in a Sept. 8 tweet. “But, importantly, our Country has TREMENDOUS FUTURE POTENTIAL. We have just begun!”

We are breaking all Jobs and Economic Records but, importantly, our Country has TREMENDOUS FUTURE POTENTIAL. We have just begun!

Meanwhile, congressional Republicans are working on “Tax Reform 2.0,” a legislative package that would make permanent the Trump’s individual tax cuts that are set to expire after 2025. The package also addresses retirement savings and tax incentives for start-up businesses.

The legislation, however, is opposed by Democrats because it lets the wealthy keep more of their earnings and may force the government to cut its welfare spending, most of which goes to Social Security and Medicare.

To push through Trump’s agenda, Republicans need to keep control of both the House and Senate in the upcoming midterm elections.

Including two special elections, there will be 35 Senate seats up for grabs come election day on Nov. 6. Of those, 23 are currently held by Democrats and two by independents—Bernie Sanders and Angus King, who are allied with the Democrats. Republicans hold eight seats.

In addition, voters will decide on all 435 seats in the House of Representatives, where Republicans currently hold 235 seats versus the Democrats’ 193.

If the elections were to be held now, 44 percent of registered voters would choose a Democrat, while 41 percent would choose a Republican, according to The Economist/YouGov Poll conducted on Sept. 9-11 (pdf).

The overall split, however, could be misleading, since congressional races will be decided district by district.