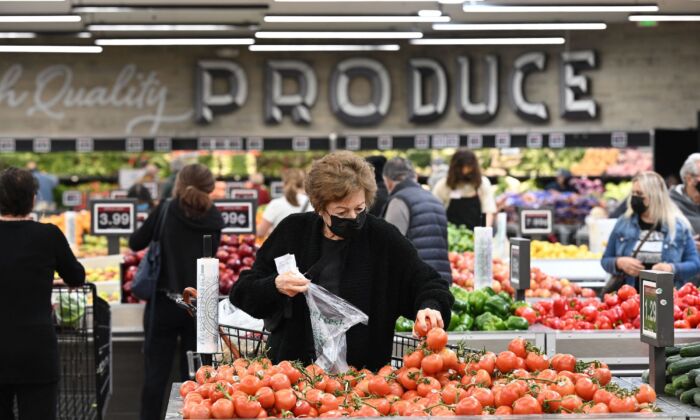 With the nation’s inflation rate at its highest in 40 years, an economist from UCLA says middle- and low-income families bear the brunt of the burden.

Inflation in the Los Angeles area, which also includes Long Beach and Anaheim, rose 8.5 percent in the year through March—on par with the national rate—the Bureau of Labor Statistics announced April 12.

More so, inflation rose 10 percent in the Riverside area, which also includes San Bernardino and Ontario.

Due to higher prices for fruit and vegetables, the food prices in the Los Angeles area increased 8.6 percent.

Energy prices rose 36.7 percent, mostly due to the continuing rise in the price of gasoline.

All other items, excluding food and energy, increased 6.2 percent due to the increasing price of motor vehicles, estimated rent, and more.

“Even though the inflation rate is the same as the national rate, the middle class or poor actually bear more burden because they live in a place [where the] cost of living is already very high—much higher than the national average,” William Yu, an economist for the UCLA Anderson Forecast, told The Epoch Times.

The burden is reflected in the rising rents, Yu said, with many middle- and lower-income families not being able to afford to own a home and it will increase the demand for renting market and drive up the rent.

“I would say if you’re a homeowner, you should feel very grateful,” he said.

Although the inflation rate is at a new record high, Yu said, the individual consumers, rather than businesses, are the ones that suffer the most.

“For businesses, I will say in terms of price, most of them will be able to transfer [the cost] to the consumers,” he said.

Where businesses suffer, he said, is in today’s worker shortage.

“They cannot find the labor—the worker—to work for their business,” Yu said.

He said the labor force participation rate has improved in the past six months, but there is still a long way to go fully recover to pre-pandemic levels.

The CPI measures the average change in prices over time and an acceptable yearly inflation rate should be rise around 2 percent or less.

When facing such high inflation, Yu said he worried that the Federal Reserve would increase the interest rate too rapidly and cause additional problems such as a recession.

“What they are looking at is an 8.5 percent inflation rate. They feel like justification for a very harsh, very rapid increase of interest rates. I’m very concerned that might cause another problem, which is something we don’t want to hear, is a recession,” Yu said.

Some Californians say the inflation adds more financial pressure to residents who are about to start a family.

Luke Huang, a computer-aided designer living in Pomona, told The Epoch Times he felt the pressure every time he goes grocery shopping, and the high cost of living forced him to change his lifestyle.

“I used to go on road trips two to three times a year; now we are very strategic on where we go and what transportation we take. My girlfriend and I talked about buying a house this year, but we just don’t think we can afford it,” Huang said.

Harry Zhu, a realtor based in the South Bay area, told The Epoch Times he expects to see rents go up even more soon.