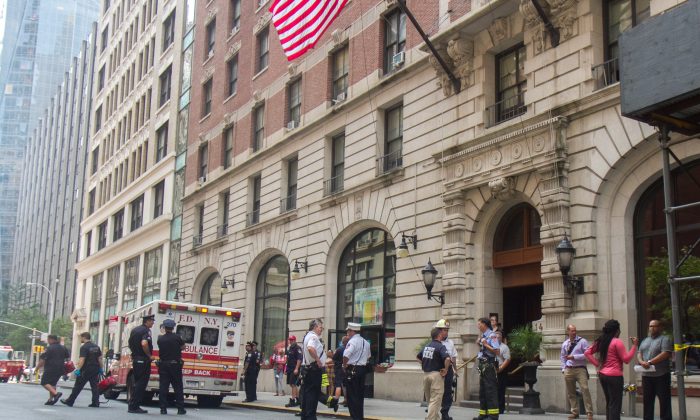 Fireman, policeman, and staff from the building where a fire broke out stand outside the building making sure the scene is secure, on 28th Street in Midtown Manhattan, New York, on July 29, 2014. (Benjamin Chasteen/Epoch Times)
Crime and Incidents

Fireman, policeman, and staff from the building where a fire broke out stand outside the building making sure the scene is secure, on 28th Street in Midtown Manhattan, New York, on July 29, 2014. (Benjamin Chasteen/Epoch Times)

It was caused by some external welding work on the fourth floor, according to officials from the fire department and the city’s Office of Emergency Management. According to the contractor, VEMA, none of their workers were injured.

The building, known as the Hotel Latham, is used as a family homeless shelter through the city’s Dept. of Homeless Services (DHS), and is known by the Children’s Rescue Fund House East, or CRF House East.

Residents, approximately 200 women and children, lingered in a plaza across the street as the building was cleared for safety. Several residents with small children from the upper floors complained that they were not told about the fire and had to alert one another.

“If it wasn’t for her, I wouldn’t have known there was a fire,” said Tika Wilson, 37, gesturing to a fellow resident. Wilson, whose daughter Dione is only 16 months old, was woken from a sound sleep by her friend when smoke started to fill the halls.

Others said they also had to alert residents, and that the smoke alarms didn’t sound.

“I knocked on everyone’s door,” said Michelle Lisiel, 23, who has a 3-year-old Kylah. “You could no longer see people’s doors. I was knocking on people’s doors saying, ‘it’s a fire!'”

A building staff member who refused to identify herself said she helped to knock on every door and notify every resident.

Wilson and Lisiel were among about half a dozen shelter residents who complained that they were not alerted to what they perceived as imminent danger to themselves and their children.

A spokesperson for the fire department said, however, that all fire alarms were operational and that it is not necessarily safe to leave one’s apartment when there is a fire. It is recommended to stay in place until evacuated by firefighters, or to call 911 for more detailed instructions.