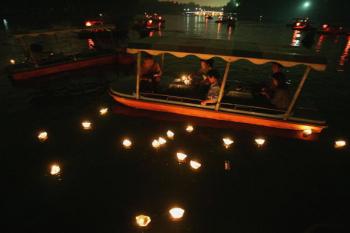 People lay candle lights into a river during the Mid-autumn Festival in Beijing, China. The Mid-Autumn Festival, also known as the Moon Festival, falls on the 15th day of the eighth lunar month. (China Photos/Getty Images)
US

Moon Festival to Shine in Australia

By Sara Matheson
Print
The second-most important festival on the Chinese calendar, behind the Chinese New Year, will draw thousands out of their homes this weekend.

The Moon Festival, or Mid-Autumn Festival, celebrates the harvest during the full moon on the Chinese lunar calendar.

The festival’s origins date back more than 1000 years to a time when the moon was acknowledged for regulating water supplies and bringing fertility to the soil.

“Traditionally, only women took part in Moon Festival rituals on the night of the full moon. Altars would be set up in households and when the full moon appeared, women would make offerings of incense, candles, fruit, flowers and moon cakes,” she explained.

The Moon Festival traditionally falls on the 15th day of the 8th lunar month, a date that parallels the Autumn Equinox of the Western calendar.

At this time, the moon is at its fullest and brightest, and it’s a time when Asian families come together to celebrate the abundance of the summer’s harvest.

Moon cakes are a significant feature of the Moon Festival and at this time of year can be seen in Chinese stores around the world in brightly coloured tins or containers.

Usually sweet and made from lotus seed paste and egg yolk, Chinese folklore places the origin of moon cakes in the Yuan Dynasty (1280–1368AD), when China was ruled by Mongolia. Rebel leaders, who were planning an uprising during the Moon Festival, are said to have ordered special cakes to be baked and distributed. Hidden inside each one was a message with details of the planned attack. The rebels were successful and went on to establish the Ming Dynasty (1368–1644AD).

The Moon Festival is widely celebrated throughout Asia and can be found from Indonesia through Malaysia, Thailand, Vietnam, China, of course, and as far as Korea and Japan.

The largest Moon Festival in Australia is hosted by the Vietnamese community in Cabramatta (noon till 9pm this Sunday September 7), but Moon Festivals will be celebrated in the Chinatowns of most major cities through September.

Ms Au said the Bondi Junction Moon Festival, to be held during the day this Saturday September 6, will be the first of its kind in Sydney and will be distinctly focused on the depth and the beauty of traditional Chinese culture.

Dragon and lion dancing, lotus flower folding, and Asian food and crafts will be just some of the features.

Audiences will also learn more about the amazing ancient mythology that has helped to shape the Chinese nation, she said.