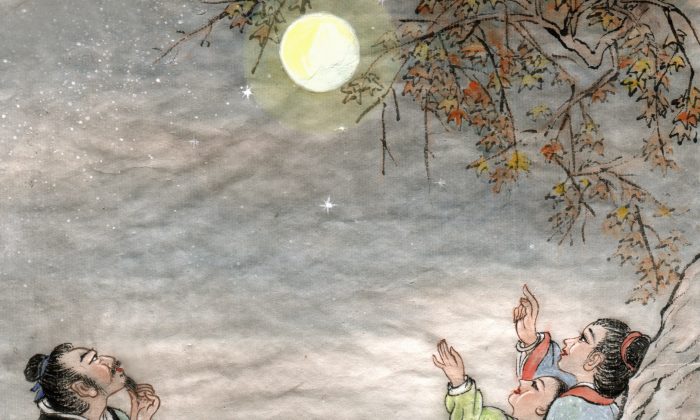 The Mid-Autumn Festival, an enchanting time to celebrate with family while admiring the moon. (Jane Ku/Epoch Times)
China

The Mid-Autumn Festival, or Zhōngqiū Jié (中秋节), is also known as the Moon Festival or Mooncake Festival. Each year, it falls on the 15th day of the 8th month of the Chinese lunar calendar.

Along with the Chinese New Year, the Mid-Autumn Festival is one of the most important traditional festivals in China. It dates back over 3,000 years when the term “mid-autumn” first appeared in the “Rites of Zhou,” a collection of rituals of the Zhou Dynasty (1045–221 B.C.).

After finishing the summer harvest season, it is an ideal time for Chinese people to celebrate on this day when the moon is usually at its fullest and brightest.

Born of a Legend

Like many Chinese festivals, the Mid-Autumn Festival originated from a legend. This particular festival celebrates the beautiful yet sad story of Chang E, the Moon Lady. Although there are many versions of this legend, the most common one is as follows:

Long, long ago, 10 suns rose in the sky and they scorched all the crops, leaving people in extreme poverty. A hero named Hou Yi shot down nine of the suns, saving the Earth from the destructive heat.

Heavenly Empress Wangmu rewarded him with a vial of elixir that would make a person immortal and allow life in the Heavens.

Hou Yi’s wife, Chang E, was known for her beauty and kind heart. Out of his deep love for her, Hou Yi gave the elixir to Chang E for safe-keeping until they could share it when he returned from hunting.

An evil man, Peng Meng, spied this through the window. Three days later, when Hou Yi left to hunt, Peng broke in with sword in hand, planning to force Chang E into giving him the elixir.

Chang E quickly put the vial to her mouth and swallowed all its contents. As soon as she had swallowed the elixir, she floated off the ground. She dashed out of the window and flew toward the moon.

When Hou Yi returned home that night, he learned from the maidservants what had happened. Tearfully, he looked up into the night sky and called out the name of his beloved wife.

At that moment, the moon became especially clear and bright. Hou Yi saw a shadow of his wife who was looking down at him, also in grief.

Hou Yi set up an altar with incense in the garden. On the altar, he put the sweet cakes and fresh fruits that Chang E enjoyed most. Then, he held a memorial ceremony for his wife in the moon. It was the 15th day of the 8th month of the lunar year.

The news that Chang E had turned into a celestial being and was living in the moon spread fast. Many people arranged altars with incense in the moonlight and prayed for the kind-hearted Chang E, the Moon Lady, to look after them.

The custom of worshiping the moon then spread among the people, and was celebrated on the same day each year.

Moon Cake, an Important Symbol of the Festival

There are many customs followed in different parts of China, such as burning incense, planting mid-autumn trees, lighting lanterns on towers, and holding fire-dragon dances, etc. However, the moon cake, with its many variations, has been an important symbol of the festival.

A typical moon cake is round or rectangular, measuring about 4 inches in diameter, and 1 1/2 to 2 inches thick. It has a flaky crust and is filled with lotus seed paste with a whole egg yolk in the center to balance out the sweet filling with a salty taste.

When the cake is cut in half to share among family or friends, the yolk looks like a round moon.

Moon cakes are usually baked and many regional variants have evolved over time based on the availability of ingredients and regional taste preferences.

The most popular types are the ones filled with lotus seed paste, red bean paste, or date paste.

In recent years, new ingredients like coffee, chocolate, nuts, fruits, vegetables, and meat have been added to give a modern twist to the traditional recipes.

Usually, there is an imprint on top of each moon cake. A red ring, the characters for longevity or harmony, a moon, Chang E, or a rabbit are the most common ones

A full and bright moon symbolizes completion, so the Mid-Autumn Festival is a day for family or dear ones to be together.

Traditionally on this day, families gather together to admire the bright moon and, after dinner, eat moon cakes with oolong or jasmine tea.

Homesickness is another important aspect of the Mid-Autumn Festival when one is not able to be with family.

Being a stranger alone in a strange land,

I miss my loved ones all the more on festive day.

So bright a gleam on the foot of my bed,

Raising my head, I gaze at the bright moon,

These great poems express very well the longing for home, and the full moon has become a reminder of distant loved ones.

Sitting in the yard or near a window to enjoy the glorious moon is another festival tradition.

Historically, the mid-autumn moon has always been a popular theme for Chinese poets and writers to express their feelings and create an idyllic scene.

Writing poetry about the moon was an art form and also a philosophical and spiritual discipline that was widespread among scholars, officials, and emperors of many dynasties

Many great poems have been written by poets past and present, the clear and bright moon their inspiration.

And the great historical figures, that had enjoyed the full moon, have each left the earth, one by one. They are no longer able to appreciate moonlight, but the moon remains, providing brightness on dark nights.

The Moon lady, herself, may now be in solitude, but she sends light to those on Earth as she continues to witness all the worldly joys and sorrows of human beings.