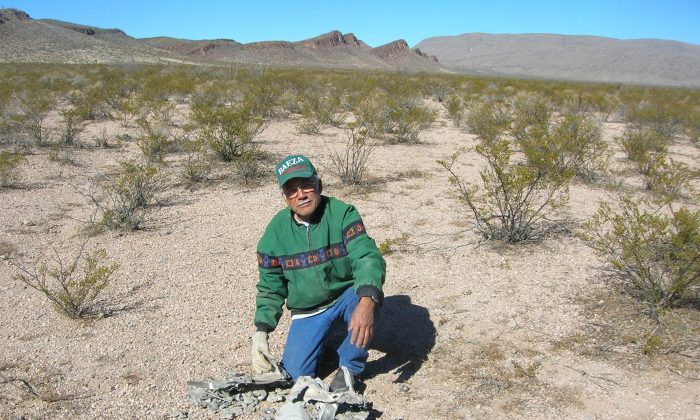 Coyame resident Leandro Valeriano examines debris from the crash of a small plane in the Chihuahuan Desert just north of Coyame, Mexico. The debris may been part of the air plane that allegedly collided with a UFO at high speeds in 1974. The allegations continue that the U.S. government destroyed all remaining evidence with high yield explosives. (Wikimedia Commons)
Beyond Science

In Coyame, Mexico, 1974, in the State of Chihuahua, an unidentified flying object (UFO) collided with a small plane. Both the U.S. government and the Mexican government responded to the crash. The series of events that followed would stay buried until the early 2000s when Mexico became a hotspot for UFO sightings and investigators flocked there, uncovering even more bizarre stories.

While the small civilian plane continued on its heading, U.S. Air Defense Radar was tracking a UFO heading over the Gulf of Mexico towards Corpus Christi, Texas; this was at approximately 10:07 p.m. Traveling faster than 2,000 mph, the authorities assumed it was a meteor. But that changed when the object suddenly changed course.

The object slowed and descended with a new heading towards Coyame, a peaceful desert town about 40 miles south of the U.S. border with a population of only about 2,500, and eventually the object disappeared from radar screens. Nearly an hour later, a civilian radio station announced an aircraft had crashed near Coyame.

Despite the refusal, Fort Bliss on the American side of the border, near El Paso, was assembling a recovery team and continued to monitor Mexican recover efforts via air surveillance. These events and those that follow were pieced together by researchers Noe Torres and Ruben Uriarte in their book “Mexico’s Roswell.”

Torres and Uriarte had as their primary source a mysterious document titled the “Deneb Report,” which was anonymously sent to UFO researchers in the 1990s. Other sources include eye-witness accounts from local residents who saw the mid-air collision. The authors also received an anonymous post on their Wikipedia page giving the names and serial numbers of some Mexican soldiers and some U.S. officials allegedly involved in the incident. The authors are in the process of following up on these leads, which they say have proved promising thus far, though they are unwilling to release the names yet they said during a “Podcast UFO” interview in June.

According to these sources, the Mexican recovery team loaded both crash remnants onto flatbed trucks and began heading south. U.S. authorities ordered a lower altitude fly-by and they saw that the convoy, eerily, had stopped.

The fly-by reported that all the jeeps and trucks were stopped and two bodies appeared to be laying on the ground. It was decided that the standing-by recovery team would move in and take charge of the UFO despite the Mexican refusal for assistance.

When American forces arrived on scene at about 4 p.m. on August 26, donning bio-hazard suits, they beheld a grizzly sight. All of the Mexican recovery team members were apparently dead and sitting on the back of one of the flatbed trucks was a metallic saucer craft the color of polished steel, about 16 feet across, with no markings.

The civilian plane was in small pieces, the result of an apparent high speed collision. The disc showed some signs of damage, also assumed to be the result of a high-speed mid-air collision.

The U.S. recovery team carried the craft back across the border into America leaving only rumors and legends of the UFO crash at Coyame.

Some of the older residents of Coyame remember that day. Some remember soldiers moving through the town and others remember the wreckage of the plane still in flames.

Today, both governments deny the incident and Coyame newspaper records from that month have disappeared. The only records that may shed some light on the incident include a newspaper story from the “El Heraldo de Chihuahua” dated Oct. 27, 1974 that mentioned a group of Mexican soldiers who died during a military transport.