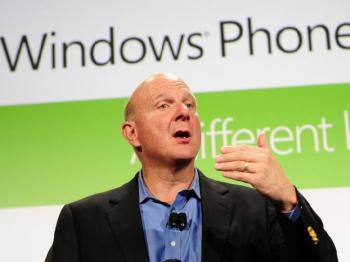 The competitive smartphone market has been dominated by Apple Inc.’s iPhone and Google Inc.’s Android software, prompting Microsoft to gain more of a presence by investing more than a billion dollars plus two years developing resulting in the launch of nine new phones based on its new Windows operating system.

Although Microsoft’s brand name may be more recognized in the computer domain, it would not be considered a frontrunner when it came to cell phones.

Microsoft’s chief executive, Steve Ballmer, said that he had "been looking forward to this day for some time" at the New York launch of the new range of phones using the system in the United States. With a marketing budget of around $100 million-400 million, according to some analysts, it would imply that Microsoft is placing a sizeable investment into this area.

Ballmer also described its new direction to be “modern in its design principles, in the way that people use modern Internet services, and we've taken a very different tack at the same time."

The Samsung Focus Windows Phone 7 will be the first release, which will be available through AT&T Inc. stores on Nov. 8 for $200 with a two-year commitment. Other phones to be released include phones from LG Electronics Inc. and HTC Corp., and also a model with Dell Inc.

The world’s biggest software maker has attempted to revolutionize its smartphone software. According to Ashley Highfield, Microsoft U.K.'s managing director, there will be “an inflection point” with international sales reaching a pinnacle whereby the number of Internet-enabled phones sold will likely surpass PCs by 2015.

Andy Lees was named the president of the mobile business two weeks ago. He joined the group in 2008 and made an executive decision to go back to the drawing board with the overall direction of the company in terms of its smartphone technology.

In April 2007, Ballmer’s response to the challenge of the iPhone was not taken seriously when he referred to it as “the most expensive phone in the world,” and lacked appeal to businesses and consumers. In an interview with USA Today he claimed that Apple had “no chance” of winning a leading market share. At the time, he said, “If you actually take a look at the 1.3 billion phones that get sold, I'd prefer to have our software in 60 percent, or 70 percent, or 80 percent of them, than I would to have 2 percent or 3 percent, which is what Apple might get.”

The hype that iPhones create with product launches has been an international show case, and its sales have shattered its own record with each new release.

Today, Ballmer has changed his tune, stating, “The phone is very important to us and the Windows Phone redefines the game,” in a televised interview from the event. “If you just take a look at compared to where we are in the market, I think this is a more modern experience than a number of the guys have there.”