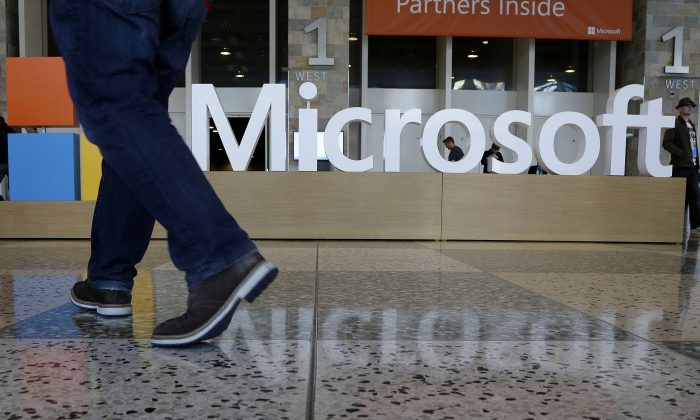 A man walks past a Microsoft sign set up for the Microsoft BUILD conference at Moscone Center in San Francisco, on April 28, 2015. Starting next year, Microsoft will cut the free space it offers through its OneDrive service to 5 gigabytes, down from 15 gigabytes now. Microsoft says the new allotment is enough for about 6,600 Office documents or 1,600 photos. (AP Photo/Jeff Chiu)
Business & Markets

NEW YORK—Microsoft is getting stingy with online storage.

The company just cut the free space it offers through its OneDrive service by two-thirds, making it the second major company to retreat from a consumer cloud-storage boom that tempted users with price cuts and ever-larger free offers.

Starting next year, Microsoft will cut its free option to 5 gigabytes, down from 15 gigabytes now. Microsoft says the new allotment is enough for about 6,600 Office documents or 1,600 photos.

Earlier this year, Amazon eliminated a free 5 gigabyte storage plan, although it still offers that amount to those who pay for its Prime loyalty program.

Microsoft is also effectively doubling prices for some storage plans. It will charge $2 a month for 50 gigabytes of storage, including the free allotment, rather than the 100 gigabytes it currently offers at that price. The company is eliminating a $4-a-month, 200 gigabyte plan.

Subscribers to Microsoft’s Office 365, which offers word processing, spreadsheet, and other apps starting at $7 a month, will now be limited to 1 terabyte, or 1,000 gigabytes, of storage. The company is killing off an “unlimited” option that it said a “small number of users” had abused by backing up numerous personal computers and storing entire movie collections.

As with similar services from Google, Dropbox, and others, OneDrive can store just about any type of files. Apps can automatically sync what you store on a device.

Under CEO Satya Nadella, Microsoft has emphasized mobile and online services such as OneDrive over traditional sales of Windows and Office software for personal computers. The company has offered services for free as a way to hook people into using other services, such as Microsoft’s ad-supported Bing search engine and the Office 365 subscription.

Microsoft didn’t explain why it was cutting back its storage offer, or why it advertised an “unlimited” option if actually using large amounts of storage posed a problem. The company declined to comment beyond a blog post it published Monday night.

Microsoft says it will give people time—up to a year in some cases—to remove files that exceed its new limits.

Here’s a look at some of the alternatives:

People get only 2 gigabytes for free, but can earn bonuses by getting friends to sign up or by uploading photos automatically from phones. After that, it’s $10 a month for a terabyte of space. Business plans with unlimited storage cost $15 a month per person, with a minimum of five people.

It’s 15 gigabytes of free storage to start, but that includes Gmail messages on the account. Photos of up to 16 megapixels, which covers most phones, won’t count toward the limit. For more storage, prices range from $2 a month for 100 gigabytes to $300 for 30 terabytes.

Free storage starts at 5 gigabytes, which includes what’s needed for iPhone backups. Those needing more can pay $1 a month for 50 gigabytes, $3 for 200 gigabytes or $10 for 1 terabyte. iCloud storage works best with Apple devices.

Amazon offers unlimited photo storage and 5 gigabytes for video and other files for $12 a year, or $1 a month. For unlimited storage of all files, it’s $60 a year, or $5 a month. Members of Amazon’s $99-a-year Prime loyalty program get the lower option for free. Amazon eliminated its 5-gigabyte free plan in March.

Although Yahoo doesn’t have a general file-storage service, it offers a generous 1 terabyte for email and an additional 1 terabyte for photos and video through Flickr.