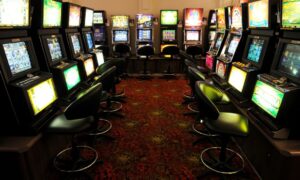 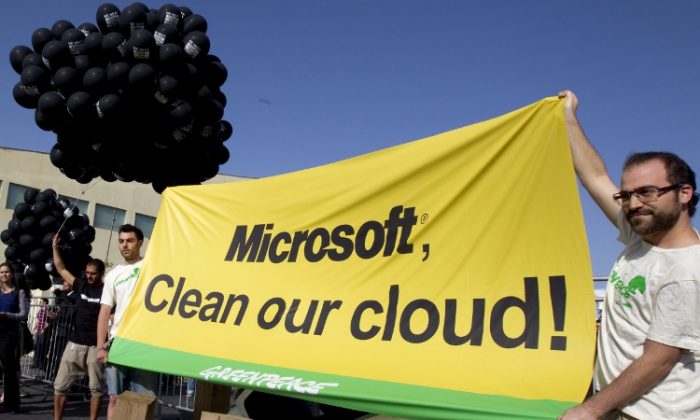 Activists from Greenpeace hold a banner with the slogan “Microsoft, clean our cloud” during a protest in Tel Aviv during a Microsoft exhibition on April 22.(JACK GUEZ/AFP/GettyImages)
Business

By lisa.wederspahn and Paul Darin
Print

In what it describes as an effort to be more environmentally friendly and set a positive example for other corporations, Microsoft announced earlier this month that it will be completely carbon-neutral as of the new 2013 fiscal year, which begins July 1, 2012.

According to a May 8 posting on its official blog, titled “Making Carbon Neutrality Everyone’s Responsibility at Microsoft,” Microsoft hopes its efforts will inspire other companies to follow suit. Microsoft says its commitment to carbon neutrality will extend throughout its facilities and logistics, including data centers, software development labs, air travel, and office buildings.

“Discussions have already been initiated across the company to increase our focus on renewable energy and to drive additional efficiencies as a result of the carbon pricing and cascade model,” said Dani Reese, a Microsoft spokesperson for the corporation. “The added price on carbon, as well as efficiency goals, should create an incentive for business groups to pursue energy efficiency and purchase new renewable energy.”

Known as “carbon footprint” or environmental footprint, these terms refer to contributions to carbon emissions by an individual, home, business, or corporation, through the use of resources like electricity, or fuel, such as driving to and from work.

Using electricity that comes from renewable sources (like wind or hydropower) can reduce a corporation’s carbon footprint. Microsoft’s goal is to achieve complete carbon neutrality—to not produce as much carbon—through their environmental efforts.

The efforts Microsoft took in order to achieve the goal of carbon-neutrality included purchasing renewable power. To achieve 2012 goals, Sterling Planet, a company contracted by Microsoft to help supply energy from renewable sources, provided more than 1.1 billion kilowatt-hours (kWh) of renewable power per year. According to Microsoft, the power will provide 46 percent of their electricity demands and is equal to removing 150,000 carbon-producing vehicles from the road.

“These investments in renewable energy and carbon reduction projects have also resulted in the U.S. Environmental Protection Agency’s (EPA) listing Microsoft third in its Top 50 list of the largest green power purchasers in the U.S.,” continued Reese. “In the future, we plan to purchase high-quality renewable energy certificates from Sterling Planet. Our investments will be Green-e-certified.”

According to information on its website, Sterling Planet is a “sustainability pioneer and innovative supplier of renewable energy,” and received the U.S. Department of Energy’s 2007 Renewable Energy Marketer of the Year award.

Microsoft hopes to earn a return on their investment into carbon-neutrality. Microsoft’s Redmond campus, for example, uses software solutions to help achieve energy efficiency. At that site alone, an energy savings of approximately $1.5 million dollars is projected for the fiscal year 2013, earning their investment back in 18 months.

According to Reese, Microsoft will have more details about impact and bottom line and cost savings over time.

Microsoft is also working with a company called CarbonSystems on a solution called an Enterprise Sustainability Platform. The platform streamlines the collection of environmental data from multiple sources, which it uses to assess other ways of reducing its carbon footprint.

They will additionally be implementing internal “carbon fees” for their operations in over 100 countries. The company hopes that this fee will ensure that all their business divisions are responsible for their own carbon emissions and efficiency.

“We believe that the carbon fee creates a new opportunity to raise awareness about the carbon emissions associated with use of the company’s data centers, software development labs, and office buildings, as well as business travel,” continued Reese. “In addition, the introduction of an internal carbon price and our commitment to achieve carbon neutrality is part of a long-term commitment at Microsoft to reduce our carbon emissions across our business operations, including cloud computing and data centers.”