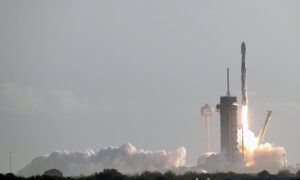 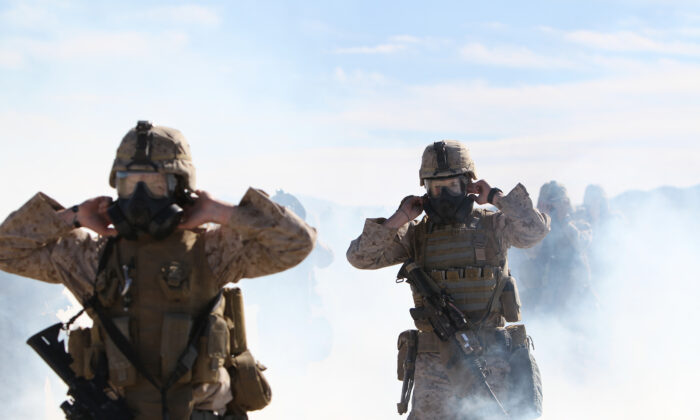 Marines and sailors with Company E, 2nd Battalion, 7th Marine Regiment, break the seals on their M50 Gas Masks in a cloud of CS gas during an outdoor gas exercise performed at range 210 Jan. 26, 2011. (Lance Cpl. Andrew Thorburn/DoD)
US News

The Combat Capabilities Development Command (CCDC) Chemical Biological Center is normally charged with the development of tactical masks and respiratory systems, along with equipment that can detect biological threats such as anthrax and smallpox.

Recently, the center has put aside its specialist equipment to test different materials for their suitability as face coverings for protection against COVID-19.

“The best readily available material to use in a homemade face covering is four-ply microfiber cloth which can be found in the cleaning section of most big box stores,” the Combat Capabilities Development Command (CCDC) Chemical Biological Center concluded in a statement, after it had tested more than 50 different materials.

“We knew that claims about masks and face coverings were exploding all over the internet, and we wanted to make sure that any decisions about materials these agencies make will be based on proven science,” said David Caretti, chief of the Center’s Chemical Biological Protection & Decontamination Division and leader of the team testing homemade face-covering materials.

The center tests by spraying a suspension of particles 0.2 to 0.3 microns in size at the material, and seeing how much gets through.

“Even a polyester bandanna can be reasonably effective if it is used in layers. It will filter out 40 percent of suspended particles,” the statement said.

“The challenge is to pick a material that effectively blocks the virus particles from going through the material while not being too hard to breathe through,” said Caretti. “If the resistance is too high, airflow will simply bypass the covering and go around the edges.”

The team will pass its findings to other agencies.

The Pentagon’s biowarfare defense capabilities are more limited than might be expected in the fight against COVID-19, according to analysts, with other parts of the military doing most of the heavy disaster-relief work.

“A biological weapon is different from this virus,” said Thomas Spoehr, director of Heritage’s Center for National Defense. “For biological weapons, typically a ‘good’ one has either over 80 percent mortality or disabling features to it,” he told The Epoch Times. “Coronavirus doesn’t have that.”

The pandemic will still likely serve as a wake-up call for the United States to guard more carefully against bioweapons, says Spoehr—an opinion shared by others.

Any military fielding of a bioweapon would also ensure that its creators had an antidote or a vaccine, according to Spoehr. In fact, one of the ways military intelligence deduces adversaries’ secret bioweapons programs is from tell-tale defensive programs.

He gave the example of a North Korean defector. “For whatever reason, they tested his blood and they found he’d been vaccinated against anthrax. The U.S. intelligence services said, ‘Well, the United States hasn’t had an offensive program for decades, so the only conclusion we can draw is that this is because of a North Korean offensive intention to use anthrax.’”

Along with North Korea, the countries around the world with suspected bioweapons programs are the usual military suspects: China, Russia, Iran–plus Syria.

Most countries guard information about biological warfare capabilities very closely, Spoehr said. “It’s a very easy program to hide, because of its dual-use technology. What looks like one kind of factory can very easily be converted to biological warfare.”

“The current pandemic foreshadows an even darker future, one for which we need to prepare,” said Thomas Mahnken, former deputy assistant secretary of defense for policy planning. “Although it appears that COVID-19 is of natural rather than man-made origin, that may not be the case the next time around,” he wrote in an article for RealClearDefense.

“Indeed, our reaction to COVID-19 shows just how vulnerable we are to the hostile use of biological agents, and just how disruptive such an attack could be.

“In contrast to the U.S. armed forces, the Russian military maintains high readiness to protect itself against chemical and biological weapons. We need to ensure that U.S. forces are capable of fighting through such advanced threats.”

The anthrax threat in 2001 prompted a boost in biochemical defense in the United States, said Spoehr, after which detectors were developed and are now positioned around the Pentagon and other key facilities, “sniffing the air” for a library of agents such as anthrax and smallpox.