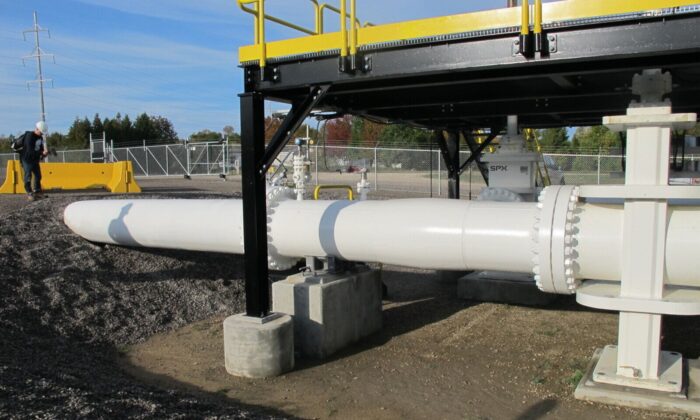 Michigan Wants ‘To Have Its Cake and Eat It Too’ on Line 5: Chambers of Commerce

Business leaders from the United States and Canada are again wading into the fray over Line 5, accusing the state of Michigan of dragging its heels to ensure the controversial cross-border pipeline remains in a state of legal limbo even as both countries contend with a looming energy crisis.

In a new joint amicus brief, the Canadian Chamber of Commerce, its U.S. counterpart and chambers in Michigan, Ohio, Pennsylvania and Wisconsin reiterate their concern that shutting down the Enbridge Inc. pipeline would have “tremendous negative consequences” on both sides of the border.

“Such a shutdown would constrain an already disrupted energy supply, an especially problematic development given recent decisions related to importation of petroleum products from Russia,” reads the brief, a copy of which was obtained by The Canadian Press.

Gasoline prices have been spiking across the U.S. and Canada, a combination of production and supply-chain pressures created by the COVID-19 pandemic and exacerbated by bans on imports of Russian energy, part of the global effort to sanction Russia over its ongoing invasion of Ukraine.

The dispute over Line 5 has been raging since November 2020, when Gov. Gretchen Whitmer—citing the risk of a spill in the ecologically sensitive Straits of Mackinac, where the line crosses the Great Lakes—abruptly revoked the easement that had allowed it to operate since 1953.

Enbridge insists the pipeline is safe and has already received a level of state approval for a $500-million concrete tunnel beneath the straits that would house the line’s twin pipes and protect them from anchor strikes. The company has repeatedly insisted it would not shut down the pipeline voluntarily.

The court dispute, however, has less to do with pipeline safety and environmental impact than it does with legal jurisdiction. Whitmer and Michigan Attorney General Dana Nessel have been trying to get the case heard in state court, while Calgary-based Enbridge has argued successfully that it belongs before a federal judge.

Enbridge won that argument last fall, prompting Michigan to abandon that challenge, instead taking up a separate case that was still at the county court level. That case is once again seized with the identical question of whether the dispute should be elevated to federal court.

Their tactics suggest “state officials are trying to have their cake and eat it too,” the chambers argue in their latest filing.

“The governor abandoned efforts to enforce the shutdown order—for the explicit reason of avoiding resolution of these arguments by the federal court.”

The fact that shutdown order remains in place, albeit unenforced, “carries real harm to Enbridge and to businesses that depend on the interstate and international energy economy to function smoothly,” they argue.

With the order still in place, Michigan regulators, as well as the U.S. Army Corps of Engineers, may be required to consider Enbridge’s applications for the tunnel project as if the original pipeline didn’t exist. Arguments to that effect have already been made before the Michigan Public Service Commission.

In other words, “whether the project is environmentally beneficial is a more complicated analysis if governmental agencies must analyze a fictional reality in which resources no longer flow through the pipelines.”

The federal government in Ottawa has already submitted two amicus briefs of its own, the latest of which makes clear that Canada and the U.S. are engaged in talks to settle the dispute under the terms of a 1977 bilateral treaty designed to ensure the continued flow of energy between the two countries.

Advocates for the pipeline say Line 5 delivers more than half the propane and home heating oil consumed in Michigan, and is a vital source of energy for Ohio and Pennsylvania as well, to say nothing of Ontario and Quebec.

Shutting it down would be an environmental disaster in its own right, they argue, resulting in gasoline shortages, price spikes and some 800 additional oil-laden railcars and 2,000 tanker trucks per day on railways and highways throughout Central Canada and the U.S. Midwest.

“It is time for the federal court to resolve the question of the legality of the governor’s shutdown order,” said Mark Agnew, the Canadian chamber’s senior vice-president of policy and government relations.

In a statement, Agnew described the case as a “litmus test” for North American energy security—one that could have a major impact on consumers on both sides of the Canada-U.S. border amid the ongoing transition to more sustainable forms of energy.

“Reliable access to energy products (is) needed to create predictable market and political conditions that support our transition to net zero in the years to come, and that’s why the Line 5 court case is so important.”

Environmental groups, however, aren’t giving up the fight.

A new brief filed this week by a non-profit known as For Love of Water argues that Michigan is obliged to shut down any “non-public trust use” that poses a threat to public trust uses such as navigation and fishing—and also to revoke permission for that use in the event the public trust is violated.

The group argues that when another Enbridge pipeline in Michigan, Line 6B, ruptured and polluted the Kalamazoo River in 2010, state authorities were obliged to reconsider the company’s easements.

The resulting inquiry found that Enbridge had “flouted” the terms and conditions of the easement “for decades” and had altered its pipeline operations without authorization from the state.

“Based on these collective findings, the state fulfilled its duty under the public trust doctrine to revoke and terminate the 1953 easement.”