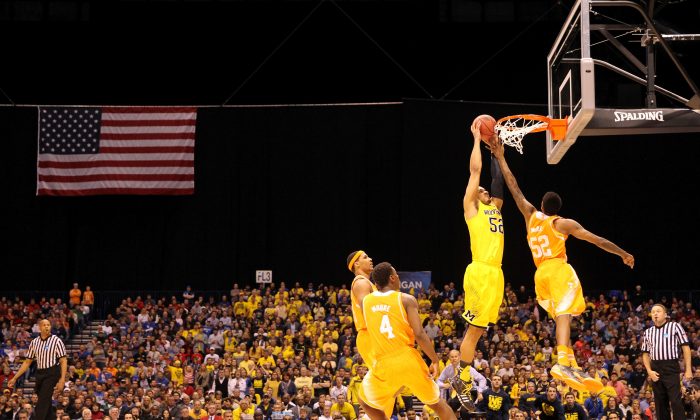 Jordan Morgan #52 of the Michigan Wolverines dunsk the ball against Jordan McRae #52 of the Tennessee Volunteers during the regional semifinal of the 2014 NCAA Men's Basketball Tournament at Lucas Oil Stadium on March 28, 2014 in Indianapolis, Indiana. Michigan won 73-71. (Andy Lyons/Getty Images)
College Sports

The Michigan Wolverines face the Kentucky Wildcats in the Elite Eight of the 2014 NCAA basketball tournament on March 30.

The Wildcats will face No. 2 Wisconsin, which won the West Regional with a 64-63 overtime win over No. 1 Arizona on Saturday. The Final Four game will be on April 5.

The National Championship is scheduled for April 7.

The teams are playing at Lucas Oil Stadium in Indianapolis, Indiana.

It will be broadcast on CBS. Live streaming will be available via NCAA.com.

Alex Poythress #22 and Julius Randle #30 of the Kentucky Wildcats celebrate defeating the Louisville Cardinals 74 to 69 on March 28, 2014. ( Jonathan Daniel/Getty Images)

Kentucky took the hard way to verge of Final Four

INDIANAPOLIS—If the crew of growing-on-the-job freshmen at Kentucky find themselves in Dallas next week, nobody can tell them they didn’t take the toughest path possible.

Their journey through the ups-and-downs of college basketball has been rough. And their road to the Final Four this year has looked, well, very much like the actual Final Four last year.

Last week, the eighth-seeded Wildcats (27-10) knocked off previously undefeated Wichita State. On Friday, they took down defending national champion Louisville. Next up, on Sunday in the final of the brutal Midwest Regional, it’s Michigan.

Yes, that’s three of last year’s Final Four teams in the span of eight days — all for a team that, according to coach John Calipari, is only starting to play this game the way it was meant to be played.

“The only thing I can tell you is, we just keep moving on,” Calipari said. “The best thing about this for me as a coach is, I’ve continued to coach like it’s midseason.”

In an attempt to get some positive response from his team, Calipari actually lengthened practices and made them more physical the last three or four weeks. He’s been doing some tweaking with strategy — and will need to do more with the likely absence of 7-foot center Willie Cauley-Stein with a left ankle injury.

What are those tweaks?

“I’m going to wait until it’s over and I’ll go through everything that we did and when I did it,” he said. “When you hear what I did, you’ll say: ‘Makes perfect sense.’ And then you’re going to ask: ‘Why didn’t you do it earlier?’ And I’m going to tell you: ‘I don’t know. I should have.'”

While Calipari keeps trying to figure out his Kentucky players, Michigan’s John Beilein will take a crack at it, as well.

The second-seeded Wolverines (28-8) are young, too. They start three sophomores and one freshman, along with the only senior on the roster, Jordan Morgan Jr. Morgan took over for forward Mitch McGary when he had back surgery in January. McGary’s loss, along with the NBA departures of Trey Burke and Tim Hardaway Jr., madeMichigan somewhat overlooked for much of the season.

Winning the Big Ten regular-season title by three games didn’t change that much.

Losing the Big Ten tournament championship game to Michigan State dropped the Wolverines out of a top-seeding position and even farther out of the limelight.

“Sometimes it gets personal when people talk about our inability to compete with people,” Morgan said. “And it’s like, we’ve been competing all year long.”

While Kentucky has been looking at the Midwest Region from the middle, Michigan has been viewing it from the top. The Wolverines could advance to the Final Four without beating anyone higher than a No. 7 seed — Texas in the second round.

“It’s a guess, that’s all it is,” Beilein said of the seedings. “And so, what it is, is, you’ve got eight teams right now, and these are the eight best teams in the country, no matter where they were seeded.”

Hard to argue that in this region.

The Wolverines are a team of spot-up jump shooters, led by sophomore Nik Stauskas, who averages 17.3 points a game. Another sophomore, Glenn Robinson III, has the pedigree (His dad is “The Big Dog,” former No. 1 draft pick, Glenn Robinson), and the experience of guiding Michigan to the national final last year, where it fell 82-76 to Louisville.

Compared to Kentucky, they are grizzled veterans.

Calipari is trying to lead the first all-freshman starting lineup to the Final Four since — guess who? — the Fab Five at Michigan back in 1992.

That was the biggest crop of McDonald’s All-Americans to land on a single roster at the same time until Calipari lured six to Kentucky for this season: Andrew and Aaron Harrison, Dakari Johnson, Julius Randle, James Young and Marcus Lee.

Three of them — Aaron Harrison, Johnson and Randle — scored 15 points in Friday’s 74-69 win against Louisville, while Andrew Harrison had 14.

So, the answer is: Yes, everyone can get his share of the glory by spreading the ball around and playing the team game.

But it has been much more complicated than simply rolling a ball out onto the floor.

“I’m just happy we’re playing better right now,” Calipari said. “Because I’m telling you, we almost ran out of runway when we landed the plane. As a matter of fact, the nose of the plane was in grass. But we got down. And if the runway was 25 games instead of 30 games, we probably went off the edge.”