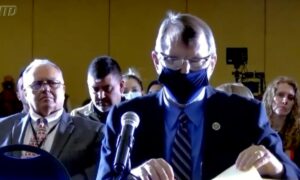 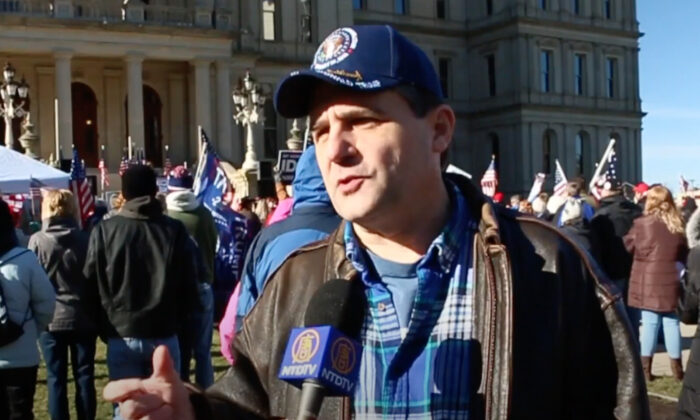 LANSING—Patrick Colbeck, a former Michigan state senator and concerned citizen, says the protests against election fraud are not really partisan.

“This is not just an election, this isn’t a typical election this year, this isn’t between Republican and Democrat, I’m actually working with Bernie supporters, Democrats that are principled, libertarians, Republicans of all stripes as well,” he said at a Stop the Steal rally in Lansing, Michigan on Nov. 28, 2020. Thousands have been protesting against election fraud every Saturday since Election Day.

“Anybody who is concerned with the integrity of this election, we’re all coming together and we’re all realizing this election was not done in a fair and transparent manner at all. There is a lot of theft that was going on and we’re exposing that theft.”

“And we expect to overturn the election results,” he said. “It’s obvious to us that President Trump won in a landslide victory and it’s being suppressed by essentially what amounts to an attempted coup. Those aren’t my words, they’re the words of a Democrat poll challenger out in Philadelphia.”

“Really what we’re talking about now is, how do you go off an address this? We’re not used to talking about this as Americans, we’re always assuming that our elections are conducted with integrity. Sure there’s always pockets of malfeasance, but in this case it was systemic,” he said.

“It’s not just here, it occurred in Pennsylvania, Michigan, Arizona, Wisconsin, Georgia, even Virginia, North Carolina,” he said. “We’ve seen it across the board, all the battleground states, this is a concerted effort.”

Colbeck was a poll watcher and he will be testifying at the public hearing in Michigan about fraud he witnessed.

“People in America, beyond the results of this particular election, we need to be confident in the results of our election, otherwise we undermine the whole system of our government. It’s all based on republican principles, which means we elect representatives,” he said.

“If we can’t trust the results that determine who our representatives are, our country ceases to exist. So this is a big deal, this isn’t just Republican versus Democrat,” he said. “And this isn’t just about what the future of America is, you know that the future of America and how we move forward also impacts the rest of the people in this world. So this is a big deal not just for Michigan, not just for America, but the people of the entire world. And the people who are out here right now are the ones who standing up and saying ‘not on our watch.’”

“We’re going to defend freedom and we’re going to make a difference,” he said. “I’m confident in the end truth will prevail.”