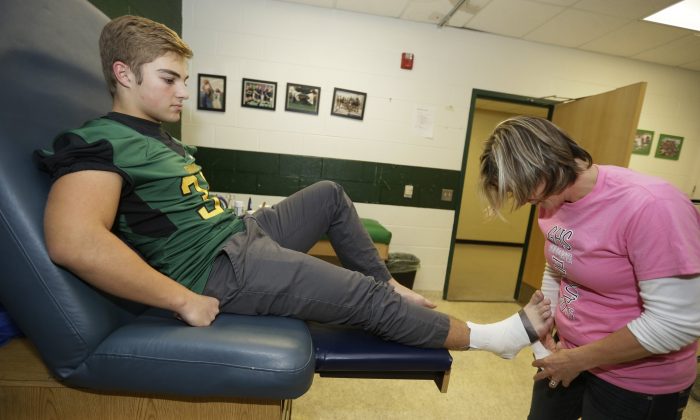 In this Oct. 23, 2015, photo, Birmingham Groves athletic trainer Kelly Salter, right, tapes linebacker Ian Rice before a football game in Beverly Hills, Mich. Last fall, Rice suffered a concussion that was so severe it sent him to the emergency room. His story is one that plays out for thousands of athletes on high school teams across the country. What's different is Groves is one of 62 Michigan high schools participating in a unique pilot concussion program that does baseline testing of athletes in football and other sports. (AP Photo/Carlos Osorio)
US

BEVERLY HILLS, Mich.—Details of the block that knocked Ian Rice to the turf are fuzzy for him now. He remembers falling over. He remembers he couldn’t walk. That was the first sign something was seriously wrong.

His father, watching his son and his Birmingham Groves High School football team from the stands, remembers a little more.

“You’re taught to bounce up and get going, but he didn’t bounce and as soon as a guy doesn’t get up like you’re used to, my heart skipped,” Michael Rice said.

Rice suffered a concussion that sent him to the emergency room last fall, and he sat out the next two games in what turned out to be a 7–4 season. As a defensive captain for a team that was a preseason favorite to win its conference, Rice had every reason to want to return for his senior year.

The 5-foot-10, 185-pound middle linebacker—and his parents—also had cause to worry because of the concussion.

His story is one that plays out for thousands of athletes on thousands of high school sports teams across the country. What’s different is that Birmingham Groves is one of 62 Michigan high schools participating in a unique pilot program that does baseline testing of athletes in football and other sports to help with concussion diagnosis.

Baseline testing—a combination of memory, reaction time, attention, and stress assessments—is done in major pro sports because it is considered an objective and individualized tool to help decide whether to remove an athlete from a game. The NCAA recommends baseline testing of all college athletes. While all states have laws that address preventing concussions in youth sports, many are weak and none require baseline testing.

Schools typically don’t argue with the benefit of testing, but cash-strapped districts often say the cost of offering such programs is prohibitive. Michigan found the seed money to make it happen this year, taking $10,000 primarily from playoff gate profits.

“The schools that are engaged in the pilot program are learning more about sideline detection and making smarter removal-from-play decisions, ” said Jack Roberts, Michigan High School Athletic Association executive director. “We know they are removing players at a higher rate than schools who are not involved in our pilot programs.”

Health and safety advocates fear concussions often go undetected in high schools because of inconsistent protocols at districts unwilling or unable to spend money for detection. It’s often on players to self-report concussions, or on coaches, who have many responsibilities and sometimes little training, to recognize symptoms.

The National Federation of State High School Associations says the only state association doing anything similar to Michigan is Mississippi, though that program covers far fewer schools and only football.

Many sideline concussion-testing programs are on the market at different price points. Michigan is testing the Illinois-based King-Devick Test affiliated with the Mayo Clinic and Maryland-based XLNTbrain Sport. The association provides them for free to the schools this year and next. Long term, Roberts thinks the association could fund it in part with a $3 to $5 fee per student.

The association expects to spend $20,000 next year to continue the program, Roberts said. He would like to see legislators assist, especially for poorer school districts, but the association is also working to get grants.

Schools typically don’t argue with the benefit of testing, but cash-strapped districts often say the cost of offering such programs is prohibitive.

Steven Broglio, associate professor of kinesiology at the University of Michigan in Ann Arbor and director of its NeuroTrauma Research Laboratory, co-authored a study that recommends such protocols at schools. It also urges hiring full-time athletic trainers to attend games and practices, something also recommended recently by the American Academy of Pediatrics.

He supports the school’s efforts, but with caution about the program’s ability to be widely applied.

“I’m a little concerned that they’re saying here’s a package that a coach, parent, anybody can use and that that’s good enough,” Broglio said. “Coaches are there to coach the team. They’re not necessarily there to manage medical injuries or medical conditions. Parents may or may not have the training depending on what their background is. “

The school in the Detroit suburb of Beverly Hills employs a full-time athletic trainer. Nationwide, just one-third of high schools have one, Broglio said.

Baselines were determined during 30-minute sessions at computers set up in a classroom. The tests measure reaction time, attention, memory, and stress by completing a series of exercises that involve such things as word recognition.

I’m a little concerned that they’re saying here’s a package that a coach, parent, anybody can use and that that’s good enough.
— Steven Broglio, associate professor, University of Michigan

Athletes suspected of a head injury undergo a sideline assessment done in about five minutes with an iPhone or tablet app. It assesses memory by providing words for the athlete to remember. It asks questions that require the athlete to recall the hit. The athletes also hold the phone as they stand tandem for 20 seconds with eyes open and then closed to check balance.

That assessment is compared to the athlete’s baseline data to help determine whether that athlete can return to play.

Salter was on the sideline for the second game of this season when Rice, back for his senior year, left the game and went to her after taking a blow to the head from the opponent’s fullback.

“I just told her I think I got a neck stinger and a little concussion,” Rice said. “We have an end zone camera, which you can see it really clearly where his head snaps my head back. I could tell immediately that something was up so I just went off.”

She administered the sideline test—including a memory assessment that can be done with an iPad or iPhone—measured it against his baseline, and removed him from the game. He was able to play the next week after being cleared by his doctor.

Rice was able to finish the season without another concussion, his father watching nervously from the stands for every game with one eye on the play and the other firmly on his son. They revisited the conversation about whether he should be on the field.

“He’s 17 and I don’t think I would deny him his ability to play,” Michael Rice said. “I would never do that, but we talk very directly about risk and reward.”

Ian helped lead the team to the conference championship and its first undefeated regular season since 1978. And that may be the end of football for him—he’s thinking about trying to be a walk-on, but more focused on getting a business degree.

Although it led to many anxious moments, Michael Rice said he was glad he didn’t interfere with his son’s desire to play.

“Was the risk worth the reward, absolutely,” he said. “I watched my son grow into a fine young man.”

Meanwhile, Roberts and the association will continue to press ahead on the funding puzzle and hopefully create a model for other states.

“I think some of the other states think we’re nuts, that this was a project that they didn’t need to undertake,” Roberts said. “We just thought it was important.”