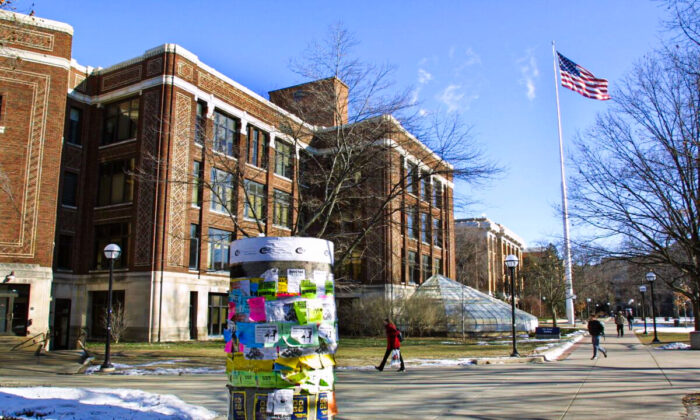 Dozens of incoming medical students at the University of Michigan walked out of the initiation ceremony on Sunday, following a failed attempt to pressure the school to cancel a pro-life doctor as the ceremony’s keynote speaker.

The July 24 ceremony, during which students received their medical white coats and took the White Coat Pledge and the Hippocratic Oath, featured a speech by Dr. Kristin Collier, a professor and vocal critic of abortion.

“I want to acknowledge the deep wounds our community has suffered over the past several weeks,” said Collier as she began her speech, apparently referencing the pro-abortion students’ frustration with the U.S. Supreme Court’s decision to overturn Roe v. Wade.

“We have a great deal of work to do for healing to occur,” the professor continued. “I hope that for today, for this time, we can focus on what matters most: coming together to support our newly accepted students and their families with the goal of welcoming them into one of the greatest vocations that exist on this earth.”

Not all students stayed to hear her message. Dozens of them, along with their parents, walked out of the auditorium as soon as Collier was introduced.

According to an interview with online publication The Pillar, Collier started as a “pro-choice atheist” but later converted to Christianity and eventually reversed her view on abortion. She now directs a UMich program on religion, spirituality, and medicine and explores in her academic work how religious beliefs or spiritual commitments inform a physician’s practices.

The selection of Collier as the keynote speaker for the White Coat Ceremony “triggered” pro-abortion students on UMich campus. They demanded the medical school find an alternative speaker, saying that the mere fact that Collier was given a platform to speak “scared” them.

In a petition, UMich students said they were fearful about the fate of abortion access in Michigan, where a 1931 ban technically remains a part of its state law and may be enforced again after the nation’s highest court handed control over abortion back to individual states.

“I’m already scared that I’ve chosen to attend school in a state where I may very well lose my right to a safe abortion, and the decision by UMMS to have Dr. Collier as a keynote speaker makes this even scarier,” one student stated.

“I am attending UMMS in large part because of their progressive approach to health care and education, and the choice to have Dr. Collier as keynote speaker makes me question my decision,” another student wrote.

UMich Medical School Dean Marschall Runge has rejected the demands, saying the university won’t cancel a speaker simply because of her opinion.

“Our values speak about honoring the critical importance of diversity of personal thought and ideas, which is foundational to academic freedom and excellence,” Runge wrote, noting that Collier was selected by the UMich chapter of the Gold Humanism Honor Society, which is comprised of medical students, house officers, and faculty. The society chapter honors “exemplars of humanistic patient care and who serve as role models, mentors, and leaders in medicine.”

“We would not revoke a speaker because they have different personal ideas than others,” he added.