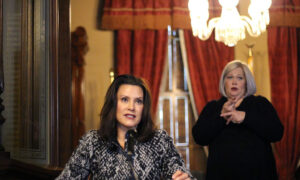 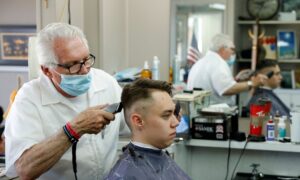 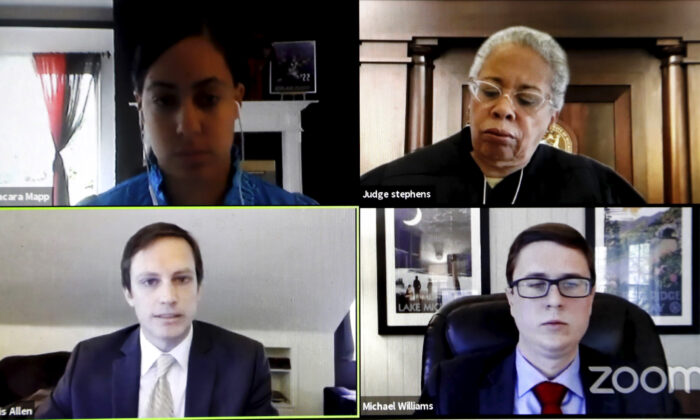 Attorney Chris Allen of the attorney general’s office presents his case before, Court of Claims Judge Cynthia Stephens in the case Michigan House of Representatives and Michigan Senate vs. Gov. Gretchen Whitmer in Lansing, Mich., on May 15, 2020. (Carlos Osorio/Zoom via AP)
US News

DETROIT—Republicans who control the Michigan Legislature urged a judge Friday to strike down stay-home orders and other restrictions related to the CCP virus, saying Democratic Gov. Gretchen Whitmer trampled their authority in determining statewide emergencies.

The clash in Michigan is the latest between Democratic governors who have shut down businesses and ordered people to stay home in response to the CCP (Chinese Communist Party) virus, commonly known as novel coronavirus, and conservatives who believe the steps are excessive.

The Wisconsin Supreme Court this week ruled against Gov. Tony Evers’ administration, clearing the way for bars and restaurants to reopen.

The dispute in Michigan centers on two laws: a 1976 statute that gives the Legislature a role in emergency declarations after 28 days, and another from 1945 that grants broad authority to governors.

The House and Senate, which are controlled by Republicans, did not extend Whitmer’s disaster emergency declaration in late April but she acted anyway.

The 1945 law cited by the governor was aimed at local emergencies, not statewide virus outbreaks, said attorney Michael R. Williams, arguing on behalf of lawmakers.

Whitmer “suggested that the (emergency) conditions would not end until such time as a vaccination has been created. That would mean we’d be talking 2021, 2022, perhaps later,” Williams said. “At other times, she’s talked about the economic consequences of the disaster. … We would be talking about the exercise of executive power with no legislative input for a period of years.”

Court of Claims Judge Cynthia Stephens seemed to pick up that point. She challenged the governor’s lawyer by asking if Whitmer could declare an emergency for her entire term and keep the Legislature on the sideline.

“The governor can’t just declare an emergency if she feels like it. The conditions have to exist, and that is undisputed,” Chris Allen of the attorney general’s office said.

“Public emergencies, whether it’s a pandemic or a flood or some kind of other local or statewide response—they demand broad authority, not narrow nitpicking,” Allen said. “The orders issued pursuant to the governor’s declaration need only be reasonable and directed at being necessary to bringing the emergency under control, necessary to protecting life and property.”

Meanwhile, confirmed virus cases in Michigan passed 50,000 and deaths rose slightly to 4,825, the health department said Friday. Tens of thousands of people have recovered since March.

The judge didn’t immediately make a decision. Stephens predicted the case would eventually land at the Michigan Supreme Court.

Whitmer, who has had a choppy relationship with Republicans during her nearly 17 months in office, has accused them of playing politics by suing her during the pandemic. She said the GOP also has inspired gun-toting protesters on the Capitol grounds.

House and Senate leaders complain that Whitmer’s broad approach to reopening Michigan doesn’t make sense, especially in regions that haven’t been hit as hard with the virus as the Detroit area, which has 66 percent of cases.

In Wisconsin, Evers lost a court case over his anti-virus strategy. The state Supreme Court said the governor’s health director exceeded her authority by extending a stay-home order without working with Republicans in the Legislature to come up with an administrative rule.