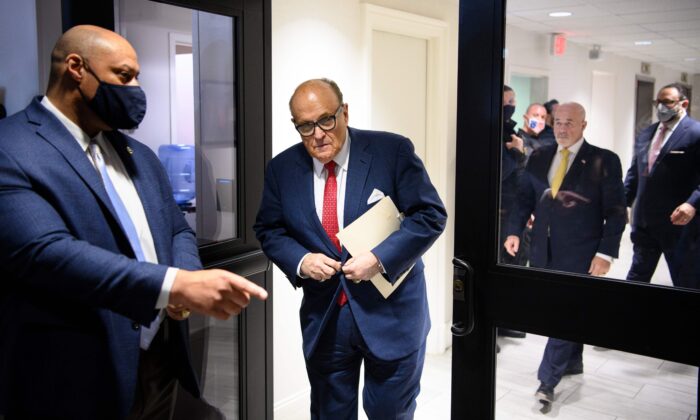 Chatfield, a Republican, wrote Tuesday that Giuliani will testify Wednesday on election fraud allegations because “election integrity still matters, regardless of whether you’re a Republican or Democrat,” and “our Republic only works if there is faith in the integrity of our election system.”

“This is the kind of courage that other Republicans and even Democrats should have when dealing with so much evidence of pervasive fraud … we will see you tomorrow in Michigan,” she wrote in response.

In his statement, Chatfield did not say whether the GOP legislators would try to reclaim their authority in calling up electors to the Electoral College over allegations of voter fraud.

“Michigan’s vote has been certified, but our ongoing inquiry into reports of election fraud will continue,” Chatfield wrote. “If the President’s lawyer has proof of fraud, then it’s important that we listen to his testimony. That’s why the House Oversight Committee will hear from Mr. Giuliani. We want to see the proof.”

“The Michigan Legislature is the voice of the people, and we will not ignore the widespread reports of voting irregularities and errors. We must continue to examine the election and vote counting procedures to protect the integrity of free and fair elections and ensure one person means one vote for this election and future ones,” he said.

He didn’t provide other details. It’s unclear if other individuals will be called to testify alleging election fraud.

Giuliani and Ellis have held events in Arizona and Pennsylvania in recent days, calling on their respective state legislatures to reclaim their authority to call up electors, while arguing that provisions in the Constitution provide them with that power. It came as legal challenges filed in several states were rejected by judges, although Ellis has said she is optimistic they will have cases heard before the U.S. Supreme Court.