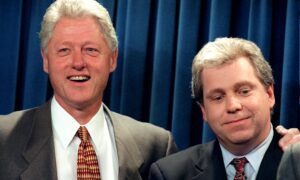 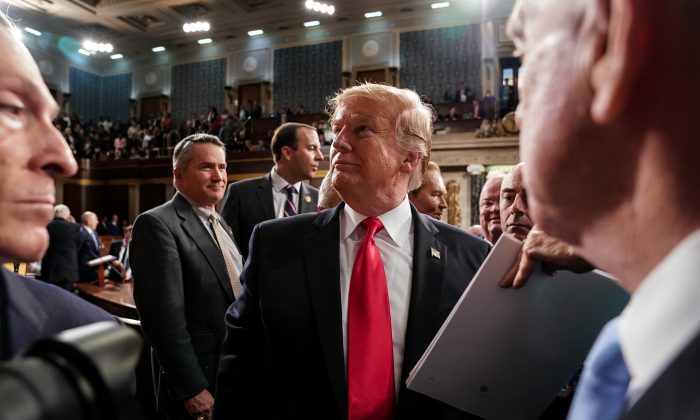 President Donald Trump departs the chamber of the U.S. House of Representatives after delivering the State of the Union address at the U.S. Capitol Building in Washington on Feb. 5, 2019. (Doug Mills-Pool/Getty Images)
Trump Presidency

Michigan Governor Gretchen Whitmer and Rep. Veronica Escobar (D-Texas) will give the Democratic rebuttals to President Donald Trump’s State of the Union address on Feb. 4, according to House Speaker Nancy Pelosi (D-Calif.) and Senate Minority Leader Chuck Schumer (D-N.Y.) in a Friday announcement.

Pelosi offered praise of Whitmer in a statement and said she’s “rolled up her sleeves to get things done” in her home state.

“During her time in public service, she has led the charge to expand health care to hundreds of thousands of people, expand protections for hard-working middle-class families and ensure clean drinking water in our communities. Her decades of hard work on behalf of the people should serve as a model for our nation. She’s a forward-looking leader who is laser-focused on solving problems for everyday Michiganders and is uniquely qualified to deliver Democrats’ message of progress for all Americans,” she remarked in a statement on her website.

Schumer echoed Pelosi’s praise, saying Whitmer has a “vision for the future” that “is exactly what this country needs, and I’m thrilled she is giving the Democratic response.”

“This response is an exciting opportunity to show the American people that not only are Democrats getting things done for them, but also for future generations to come,” said Whitmer, a Democrat, in a statement.

Escobar will offer the rebuttal in Spanish, coming after Whitmer’s speech.

“I am honored to be delivering the Democratic Spanish-language response to President Trump’s State of the Union and look forward to addressing our nation on the progress Democrats have made For the People,” Escobar said in a statement.

In the 2019’s State of the Union speech, which was reportedly watched by more than 46 million viewers, Trump spoke of bipartisanship, the U.S. economy and job creation, and a number of foreign policy initiatives.

“The lawless state of our southern border is a threat to the safety, security, and financial well-being of all Americans,” Trump said at the time. “We have a moral duty to create an immigration system that protects the lives and jobs of our citizens.”

He also called on lawmakers across the aisle to “reject the politics of revenge, resistance, and retribution—and embrace the boundless potential of cooperation, compromise, and the common good.”

Last year’s State of the Union was delayed due to the month-long government shutdown that started in December 2018.