Michigan Governor Responds to Lockdown Protests: No Health Decisions Based on 'Political Games'
0 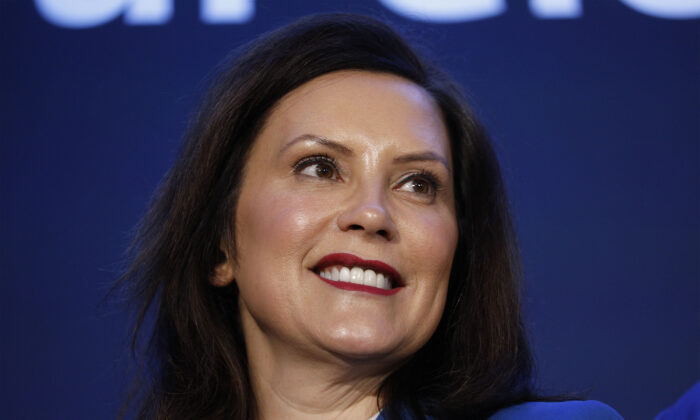 Michigan Gov. Gretchen Whitmer (D) on Wednesday said that the continuing protests in the state against stay-at-home orders issued to curb the spread of COVID-19 are making it more likely that the state will have to lengthen the restriction measures.

During an appearance on ABC’s “The View,” Whitmer said that the armed anti-lockdown protests at the state’s Capitol have “been really political rallies where people come with Confederate flags and Nazi symbolism and calling for violence.”

“I do think that the fact of the matter is these protests, in a perverse way, make it likelier that we’re going to have to stay in a stay-at-home posture,” Whitmer continued.

The protests are “not appropriate in a global pandemic,” the Democratic governor said, adding, “This is calls to violence. This is racist and misogynistic.”

The state’s stay-at-home orders—one of the strictest in the nation—and Michigan’s state of emergency have been extended until May 28. The measures include not allowing people to travel to other homes under most conditions and bars the sale of items deemed nonessential at many stores.

Hundreds have gathered at the Michigan State Capitol in Lansing against Whitmer’s stay-at-home order in recent weeks, holding placards with slogans like “Shut down the lockdown,” and “No work, no freedom.”

The governor has insisted that conditions relating to the CCP (Chinese Communist Party) virus outbreak, commonly known as the novel coronavirus outbreak, remained severe enough to justify a state of emergency and continued restrictions in the interest of public health.

Whitmer said Wednesday that while she respects “people’s right to dissent,” the anti-lockdown protestors were putting others at risk.

“And I ask that everyone who has a platform uses it to call on people to observe the best practices promulgated by the CDC and to stop encouraging this behavior, because it only makes it that much more precarious for us to try to re-engage our economy, which is what everyone says they want us to be able to do,” Whitmer continued.

“We have legislators who are showing up to work wearing bulletproof vests,” she said. “That is disenfranchising thousands of people in our state, if their legislator doesn’t feel safe enough to go to work and to do what their job is. No one should stand in our way of doing our jobs.”

Let’s work together. If you’re planning to attend the demonstration tomorrow, here’s what you can expect to see from the MSP. pic.twitter.com/vOwfJIUBia

Ahead of an expected anti-lockdown protest by the group Michigan United for Liberty in the state on Thursday, Michigan State Police (MSP) said in a video published on social media that there will be a police presence at the state Capitol to ensure there is a safe environment for those who choose to demonstrate.

“While Michigan is an open carry state, if you decide to exercise that right, make sure you are not brandishing that weapon in any manner, shape, or form,” MSP Lieutenant DuWayne Robinson warned.

“That is holding it in a manner or waving it or pointing it at someone that inflicts fear on a reasonable person,” he added. “If you are caught doing such a thing, we will address that and you could be subjected to an arrest immediately here on the grounds.”