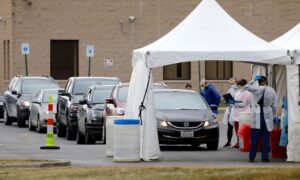 Five businesses have filed a lawsuit against Michigan Gov. Gretchen Whitmer and Michigan Department of Health and Human Services Director Robert Gordon, accusing them of violating constitutional rights by imposing a stay-at-home order to curb the spread of COVID-19, the disease caused by the CCP (Chinese Communist Party) virus.

Law firm Butzel Long filed the suit (pdf) at the U.S. District Court, Western District of Michigan—Southern Division, on Monday. It claims Whitmer’s “Stay Home, Stay Safe” order, recently extended through May 15 though in an amended form that loosened some restrictions, is based on unproven assumptions about how deadly the CCP virus really is.

“Based on speculative modeling on the infectiousness and lethality of a new coronavirus, Governor Whitmer has issued executive orders that have shuttered civil society, placed 10 million people under house arrest, and taken jobs away from nearly 1.2 million people, all without due process of law,” the plaintiffs allege in the complaint.

“The Governor has not disclosed the data or methodology used to create the modeling that purportedly justifies this extreme action,” they claim.

Further, the claimants argue that by suspending the Freedom of Information Act through June 4, Whitmer has stymied efforts at assessing whether the models that predict COVID-19 case and death counts in the state of Michigan are sound.

They also argue that since Whitmer’s executive order was based on the goal of flattening the epidemic curve, meaning reducing the rate of new infections and deaths, by extending the lockdown despite the fact that Michigan’s COVID-19 curve has flattened, is unreasonable and unnecessary.

The plaintiffs—which include a residential brokerage, an executive property maintenance company, and an exporter of architectural and automotive glass—are seeking “a declaratory and injunctive relief,” meaning a relevant judicial statement and corresponding action. Specifically, they want a judge to declare that the executive orders compelling people to stay at home, along with related actions, are unconstitutional.

“Such a declaration, and a corresponding injunction, will yield a more rational, pragmatic response to the virus that saves lives, saves livelihoods, and preserves constitutional norms all at the same time,” the complaint states.

The move comes after at least two federal lawsuits were filed against Whitmer for executive orders requiring residents to stay at home and most businesses to shutter.

Whitmer’s initial stay-at-home order was due to lapse on Thursday. Announcing its extension on April 24, Whitmer lifted some personal and economic constraints, citing data showing the epidemic curve had flattened.

“Data shows that most Michiganders are doing their part by staying home and staying safe. That’s good, but we must keep it up. Social distancing is our best weapon to defeat this enemy,” Whitmer said in a statement. “With new COVID-19 cases leveling off, however, we are lifting some of the restrictions put in place in the previous order.”

The looser restrictions pertain to some outdoor activities like boating and golfing, and letting some people go back to work.

Further, Whitmer’s Director of Communications Zack Pohl said Wednesday that the governor would be signing an executive order Friday that would reopen construction work on May 7.

“No one should be surprised that the governor would open a lower risk field like she has said at previous press conferences,” Pohl said, Fox reported.

Whitmer said Monday she would lift restrictions on construction and if the case and death counts continue to fall, other categories of business activity would resume.

“I would anticipate in the coming days if our trajectory of hospitalizations continues to go down and our ability to test goes up, that we will go into the next low-risk category,” Whitmer said, Fox reported.

Announcing the extension of the amended stay at home order last week, Whitmer said, “I want to be crystal clear: the overarching message today is still the same. We must all do our part by staying home and staying safe as much as possible.”